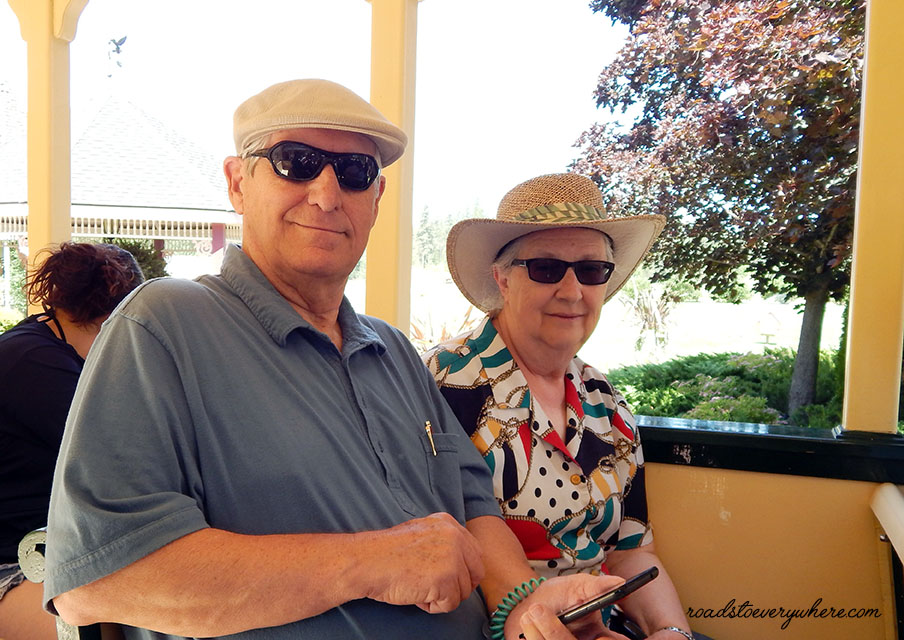 On Friday evening when my parents were visiting, we sat out on the front porch to visit. I asked if I could interview them for my blog again. This was the result…

Me: What have you been doing on your vacation?

Dad: Well, yesterday we went to the Young Living lavender farm, only they didn’t have much lavender. What was it they were growing?

Mother: Melissa. It was a mint plant called melissa.

Me: How did you decide to stay at the lovely Cook Vacation Resort in historic downtown Rathdrum, Idaho?

Dad: Well, we were invited.

Mother: The price was right.

Dad: Yes! The price was right. The hostess and the host and the… uh… the maids were very, very cordial and helpful. And the cook was wonderful! And we had a good time…

Me: What else have you done on your vacation?

Dad: Well, we started off by flying to Indianapolis, Indiana for my wife’s… Pallie’s… [laughs] whatever her name is… family reunion. [He’s pretending like he doesn’t know me for this interview, you see.]

I think they ended up with a little over 50 people there. And we had a good time there.

We assisted with some of the cooking and smoking of meat, working the grill, grilling chicken and hamburgers and hot dogs for the family.

We were there about a week, weren’t we, honey? Five days?

Mother: We were. But the family reunion wasn’t that long.

Dad: I know. We saw some friends that live in Indianapolis, and then we went up to Paul’s house…

Me: What else have you done during your days here in Idaho, besides visiting the melissa farm?

Mother: Well, I added some pockets to a pair of shorts.

[She’s very handy at taking care of any mending or alterations that accumulate between her visits. We appreciate her for that.]

Dad: Did some shopping.

Mother: We went to that dam… and the car show…

Dad: We did go to a car show, didn’t we? Saw some older cars.

And had second-hand marijuana smoke coming into our camp spot.

Mother: I went to the quilt booth. [laughs]

Darrell [that’s Dad] told me about a quilt booth they had. He was so excited. They had a quilt hanging for their back drop. You could buy raffle tickets for it. That was the quilt booth!

Dad: It was a machine quilt!

Mother: It was machine quilted.

They also had some pot holders, fifty cents, or three for a dollar. Is that what it was?

Me: No, I think you had to buy raffle tickets for the pot holders, too.

Mother: Maybe so. Wonder how many pot holders you got for that ticket? One?

Mother: They had several there to choose from.

Me: What are your plans for tomorrow?

Dad: We’re going to a place called Silverwood, an amusement park where my eldest granddaughter works.

And she’s going to be our tour guide tomorrow, if she’s not called in to work. She got called into work early today.

Me: What are your plans after you leave here?

Dad: Whatever my daughter and her husband tell us to do, ‘cuz we’re so old we hafta have our children tell us what to do.

Me: But you’re leaving here Monday. What are you going to do then?

Dad: Oh! I didn’t know we was talkin’ ’bout that! We’re gonna fly out of Spokane about 5 o’clock in the mornin’… What time?

But anyhow, we’re gonna fly to Boise airport. Someone of our precious children will pick us up and we will stay there a week and then we’ll fly out and go home.

Me: Will you be staying at a Lovely Vacation Resort there?

Dad: Oh, yeah. We have a wonderful host and hostess there. And they will treat us like royalty. That farm has Arabian horses that we get to view.

Mother: And lots of kittens.

Dad: And lots of cats and kittens. They always have kittens and cats there. Because that is a multiple farm. It just has all kind of animals there… dogs…

They have a dog about as big as a Shetland pony. You can almost ride him. His name is Baron, by the way. And then they have a little chihuahua named Tinkerbell. That is the most hyper dog you ever saw.

Mother: He can’t be as hyper as Murphy!

[Side Note: Murphy was our previous dog, a cocker spaniel/terrier mix. He was 14 when he died in 2004. This is an important bit of information for you to know with the direction the conversation went after this.]

Dad: I think Murphy’s older’n that.

I thought you was talkin’ about Aunt Dee’s dog, Titus!

[We were all laughing by then.]

[pointing to Cookie] Right out there is the best dog there is for this neighborhood. She guards everything. Anybody comes around this house she… is it a she? …she lets us know.

Me: So when will you be going home to Arkansas?

And so they did. We had fun with them at Silverwood the next day, and early the following Monday they flew on to visit my brothers in southern Idaho… and then safely home again right on schedule.