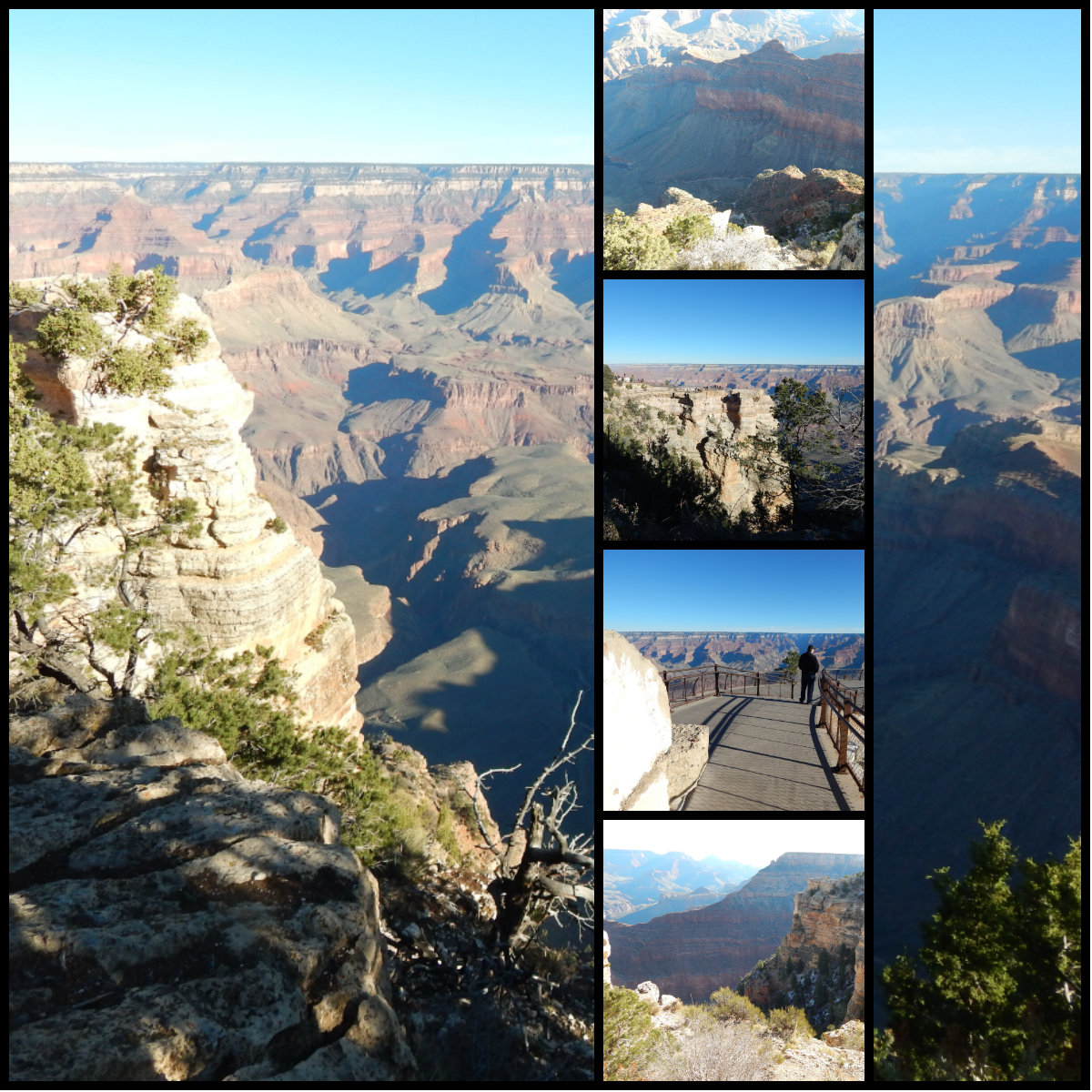 So… you remember how back in the 1950s Great-aunt Thelma would invite all the neighbors over to look at the hundreds of slides that she had taken on her trip to the Grand Canyon?

Yeah, me neither. I did have a Great-aunt Thelma. And she did take slide pictures on vacation. But the 1950s were before my time. And I have no idea whether she invited all the neighbors over to look at her slides. Nor do I know if she ever visited the Grand Canyon. I’ve just heard stories like that from that era. And I can imagine how boring it would be to look at someone else’s vacation slides, unless, of course, there was a good story to go with them.

So that’s what I’m going to try to do today. Share a few of my Grand Canyon pictures… and tell the story behind them. I promise not to keep you too long. After all, we were only there 2 or 3 hours. 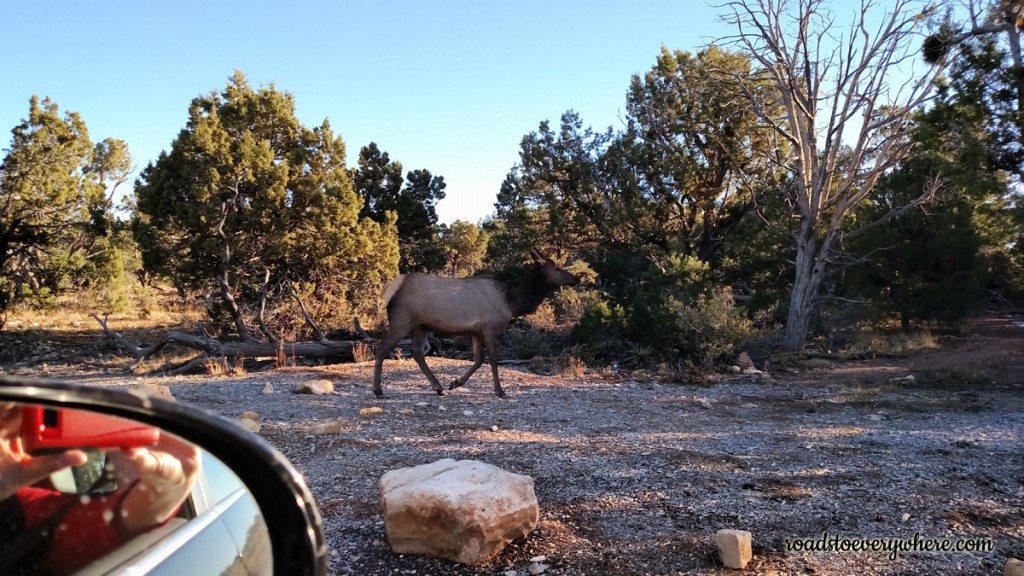 We were greeted by this lovely elk cow as we entered the Park. She wasn’t super friendly as she obviously had more urgent matters to attend to. Still, we were happy to see her trotting along beside the road.

We stopped at the Visitor Center first but the Park Rangers were diligently guarding it and not letting anyone in because of “possible gas leaks” they were checking out. So we walked over to the closest viewpoint and duly “oooed and ahhhed” and snapped lots of pictures. 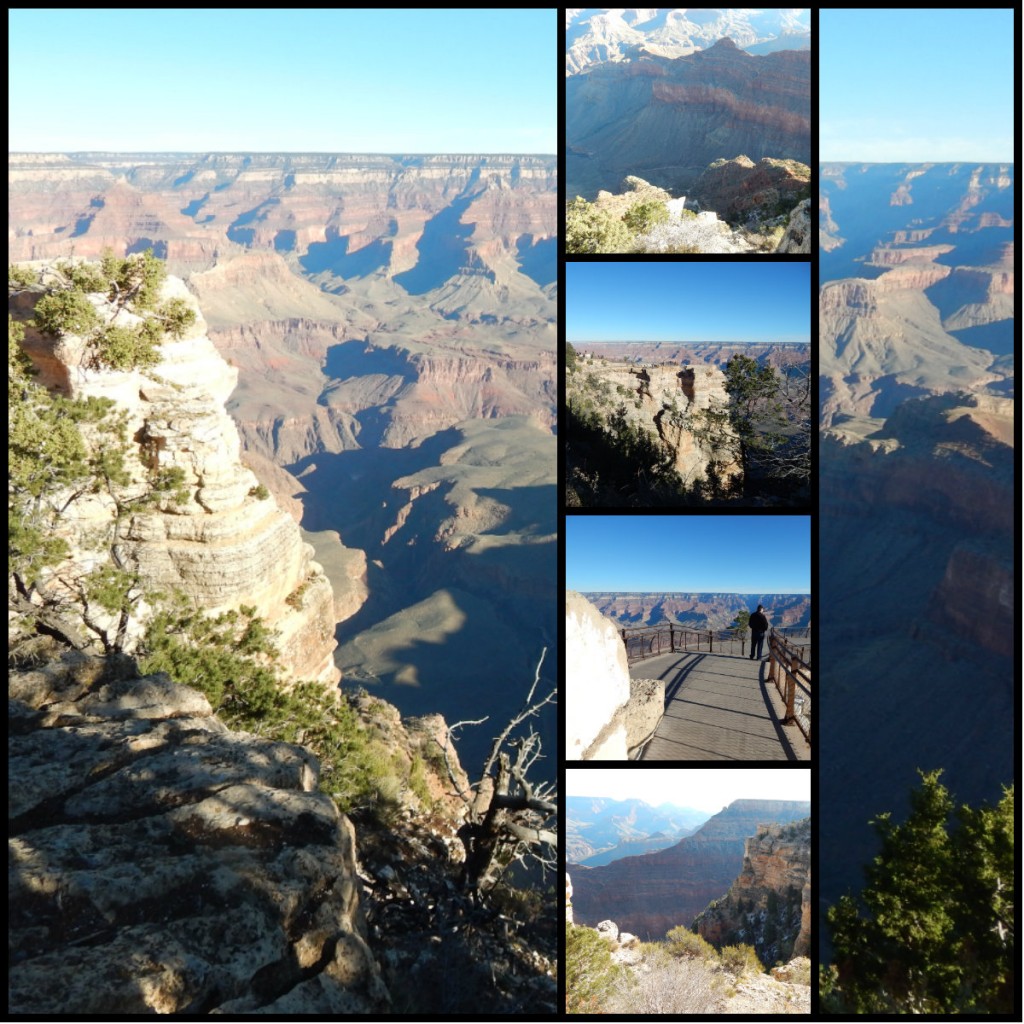 This couple asked us to take a picture of them with their camera. Lyle obliged while I took a picture of Lyle taking their picture. 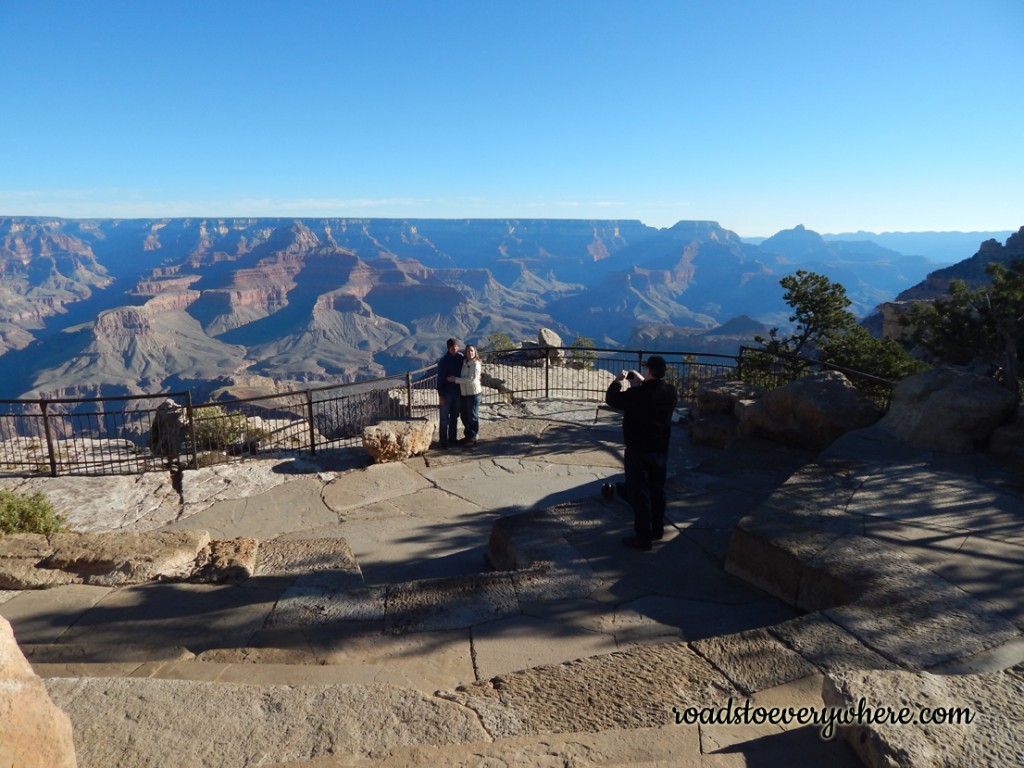 “Oh, good!” I thought. “I can ask them to return the favor.” So I did. Sure, they’d be happy to, they said. I showed the guy which button to push on my camera, like you do when you let someone else use your camera. “Yeah, yeah,” he said. He acted like he was familiar with my camera model, so I was hoping he might get a nice shot of us. “Let me take a couple,” he said. When he returned my camera I noticed he had zoomed in, so I thought maybe he took a close-up shot for the second one.

I was very disappointed later to discover that he hadn’t taken any pictures at all. I don’t know what buttons he was pushing… apparently the one for the zoom… but he didn’t push the one that actually takes a picture. Guess he wasn’t as familiar with my camera as I thought he was. This “shadow-selfie” is the best I have of the two of us together. It’s still pretty cool, dontcha think? 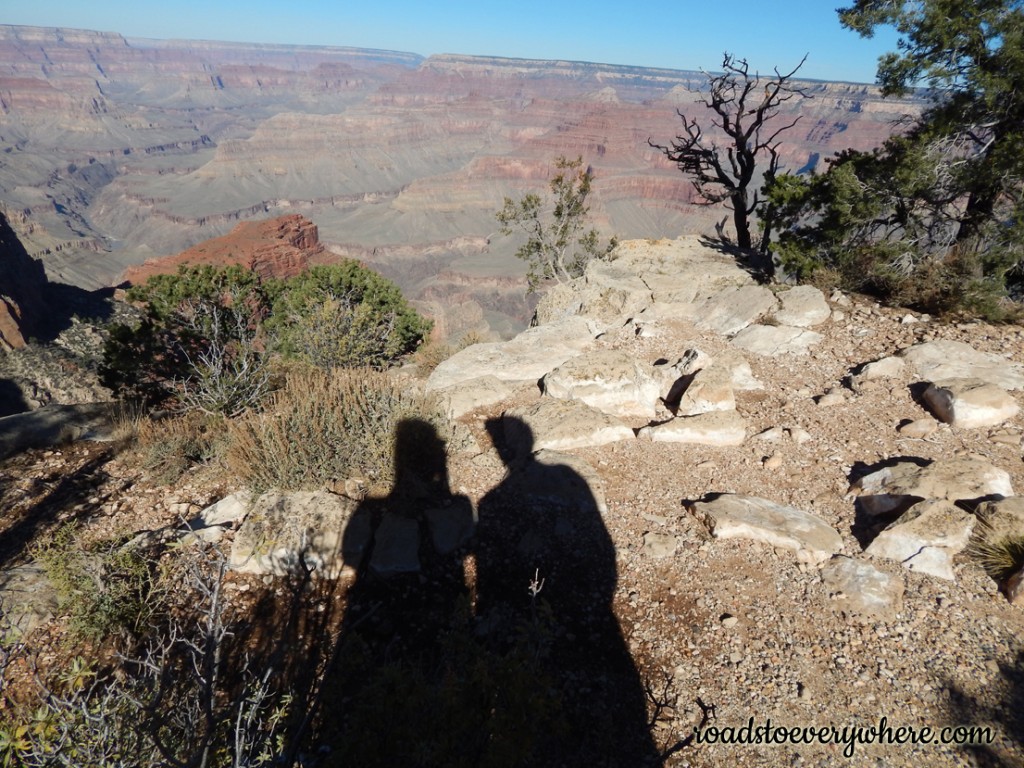 Then we went back over to the Visitor Center. I guess the gas leak crisis was over, because they let us in this time. We studied the map and the information provided to decide what to do next in the short time we had. 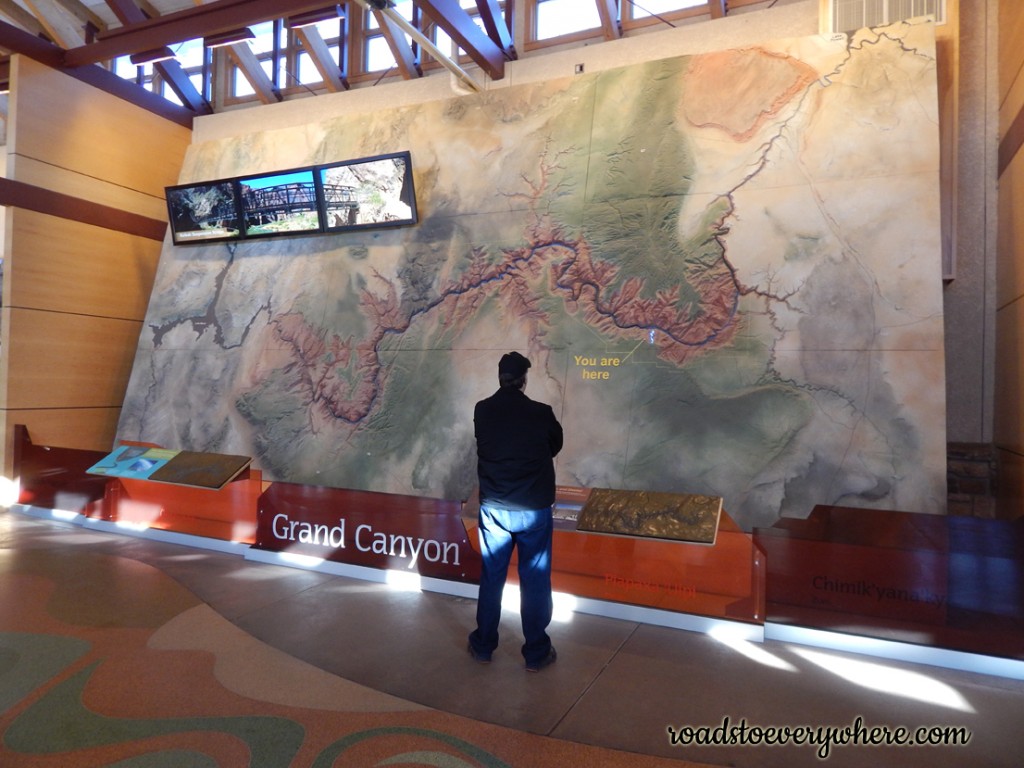 While we were there I took note of the sign that told how many species of birds, mammals, and plants are in Grand Canyon National Park. 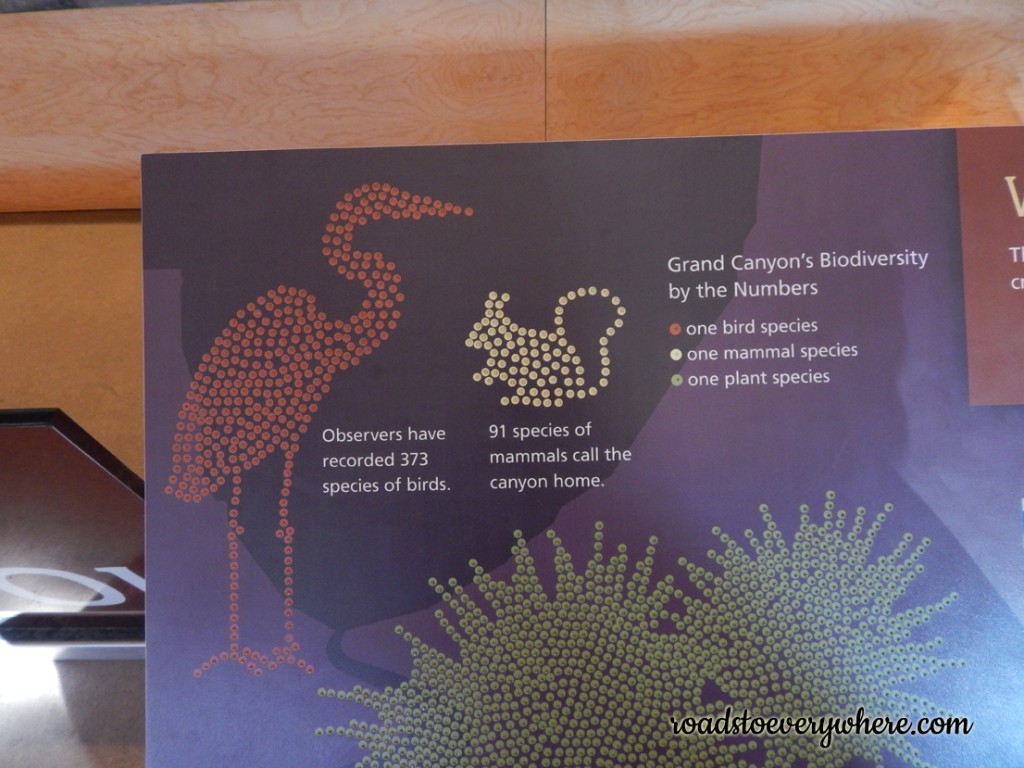 I wasn’t interested in trying to count the birds, but I thought the information about mammals might be helpful for my wildlife tallies. So far, one elk. One down, ninety to go. 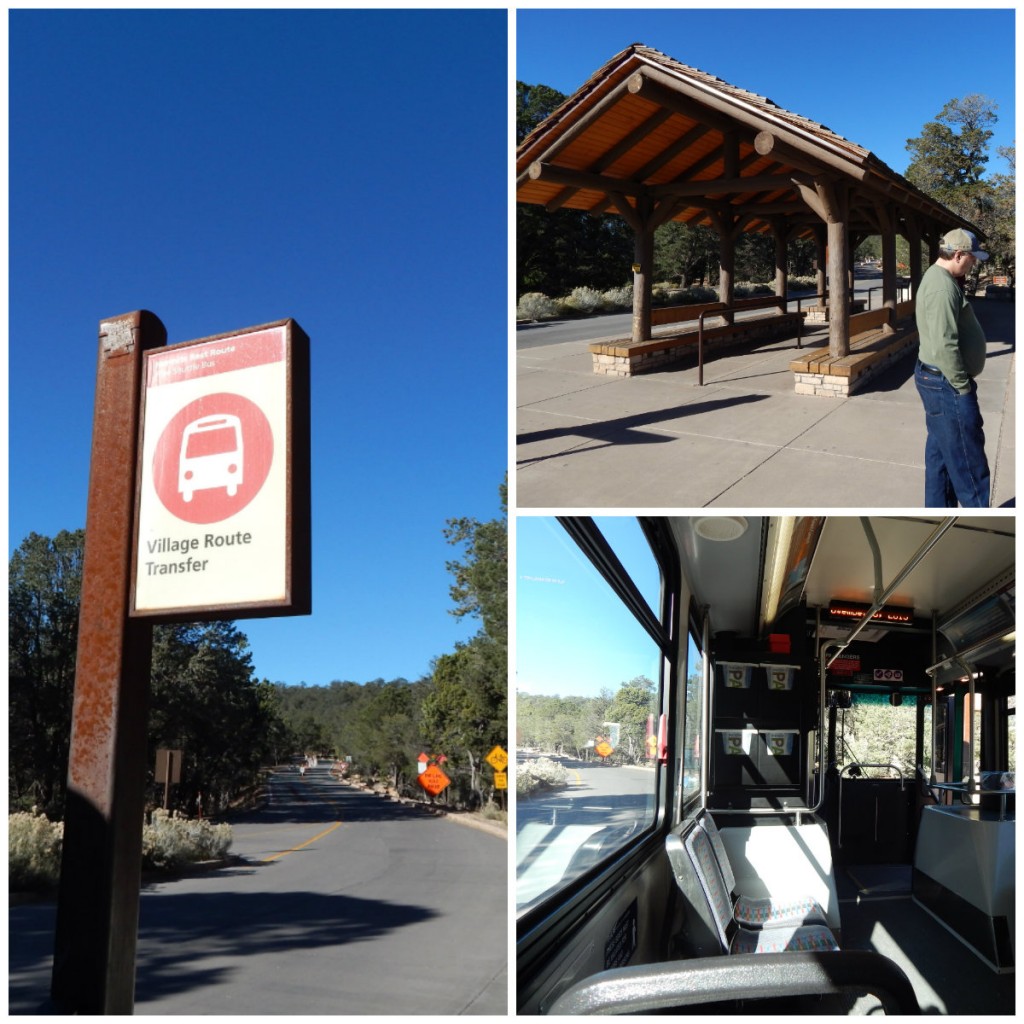 From there we decided to drive over to the Grand Canyon Village and take a shuttle bus that follows a road along the rim. They don’t let you drive on that road with your car, but there are several stops along the way and you can get off at any stop and hike along the rim, then catch the shuttle back whenever you like. Just riding the shuttle for the whole route and back again takes about 80 minutes. 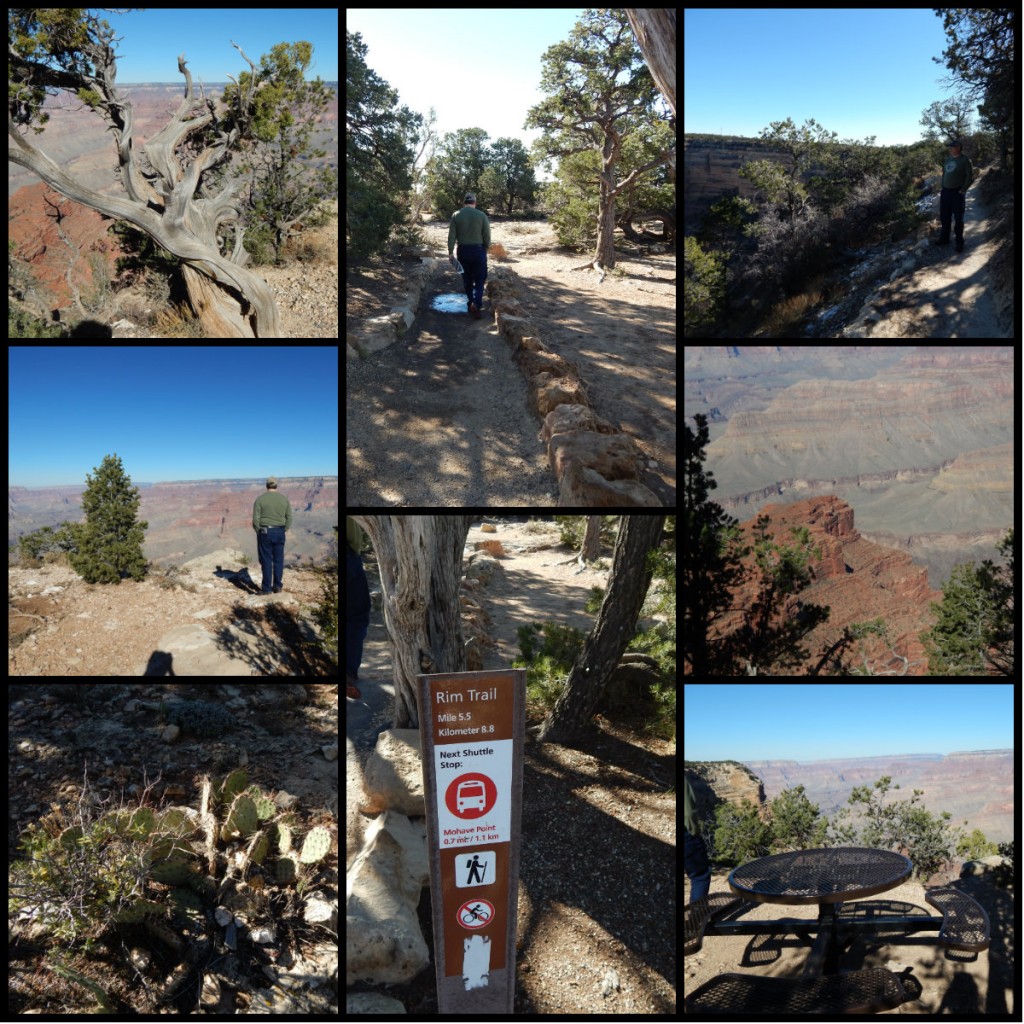 We chose to get off at one stop about half-way along the route and hike 0.7 miles to the next stop, then take the shuttle back, rather than going all the way to the end. Laura called while we were hiking and wanted to know what we were doing. When I told her we were hiking along the rim of the Grand Canyon she didn’t quite believe me. “Is it a real hike? Or just a sidewalk?” Rugged outdoorsman I’m not. 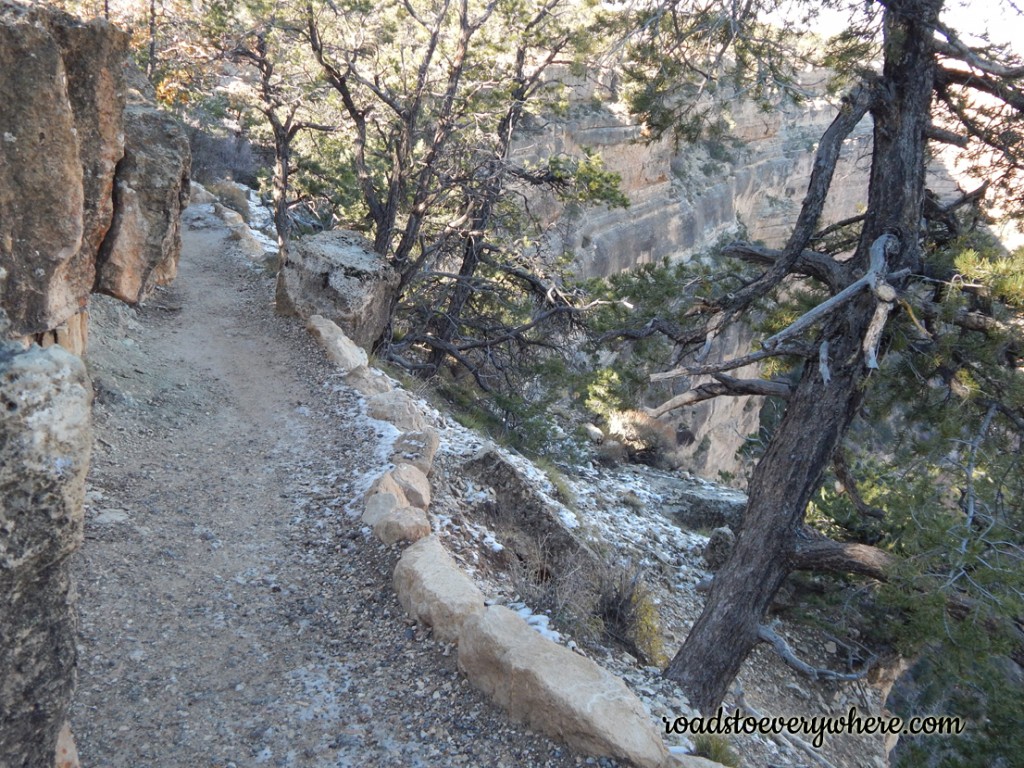 “Well,” I told her, “it is a marked trail, but it’s gravel, not paved. And there are no fences or guard rails. Just rocks to mark the path. And it’s over half a mile to our destination. I think that counts as a real hike.” She conceded that it did. Short and easy, but real. 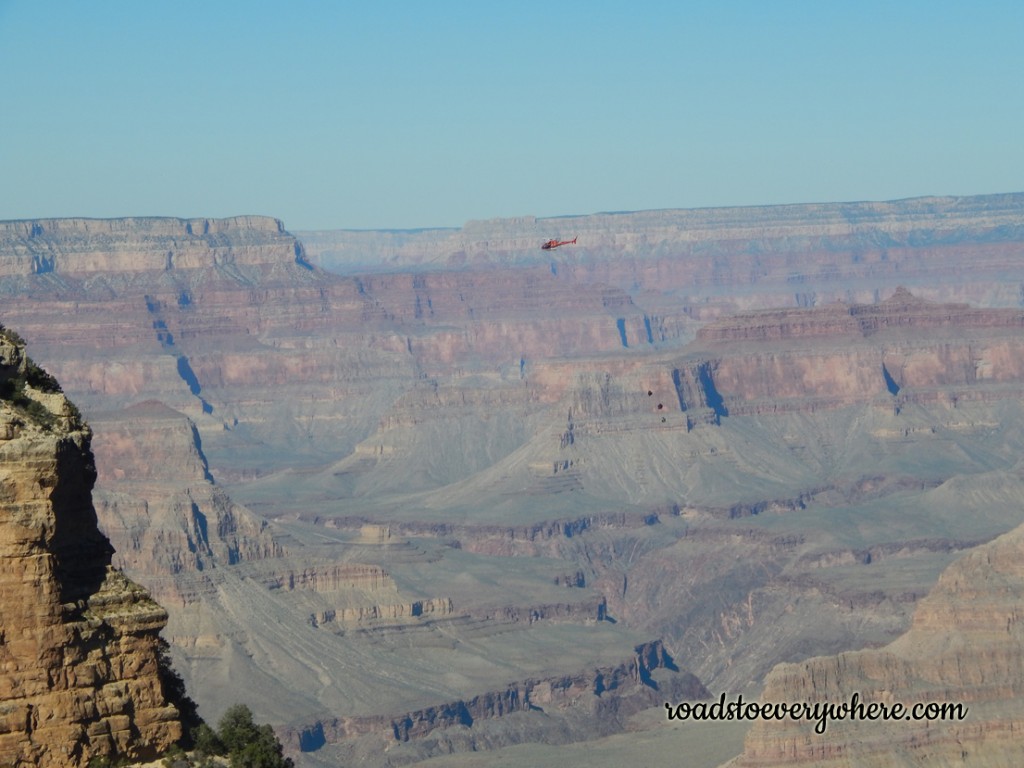 It was so interesting to see the view from all different angles as we hiked along. We saw a helicopter carrying something. See the three little dots dangling below it? We couldn’t figure out what it was transporting. It disappeared from view for a few minutes and then came back the other way. When it came back it only had one “dot.” 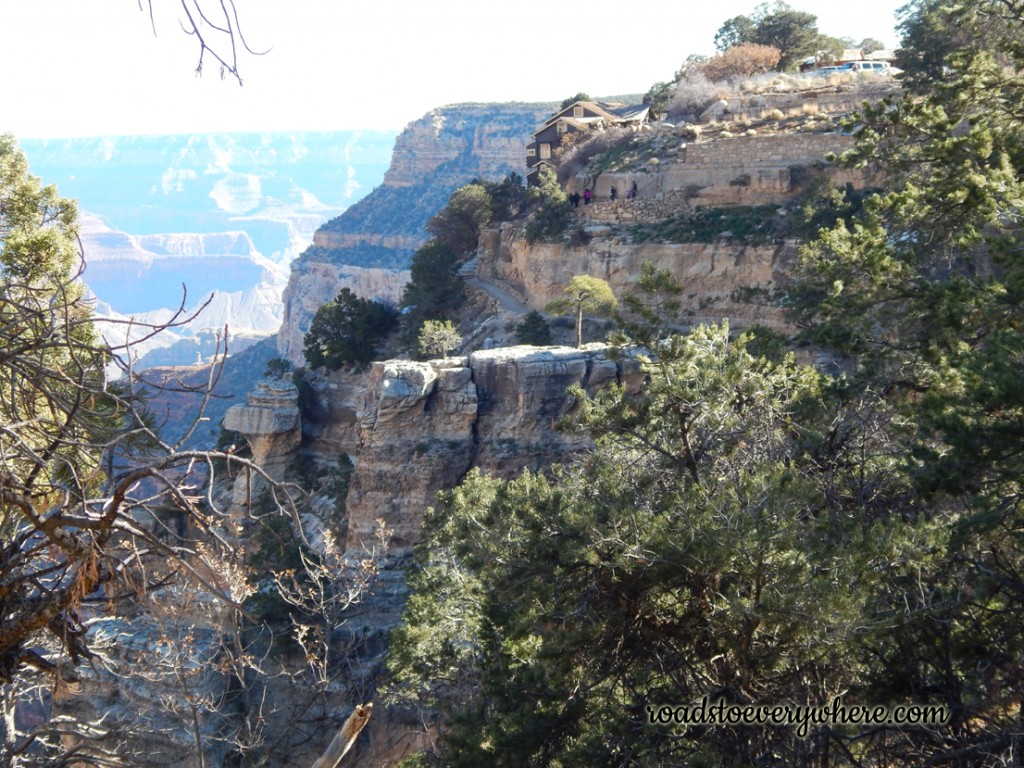 This was our second visit to the Grand Canyon. Maybe some day we can go back long enough to hike down into the canyon. 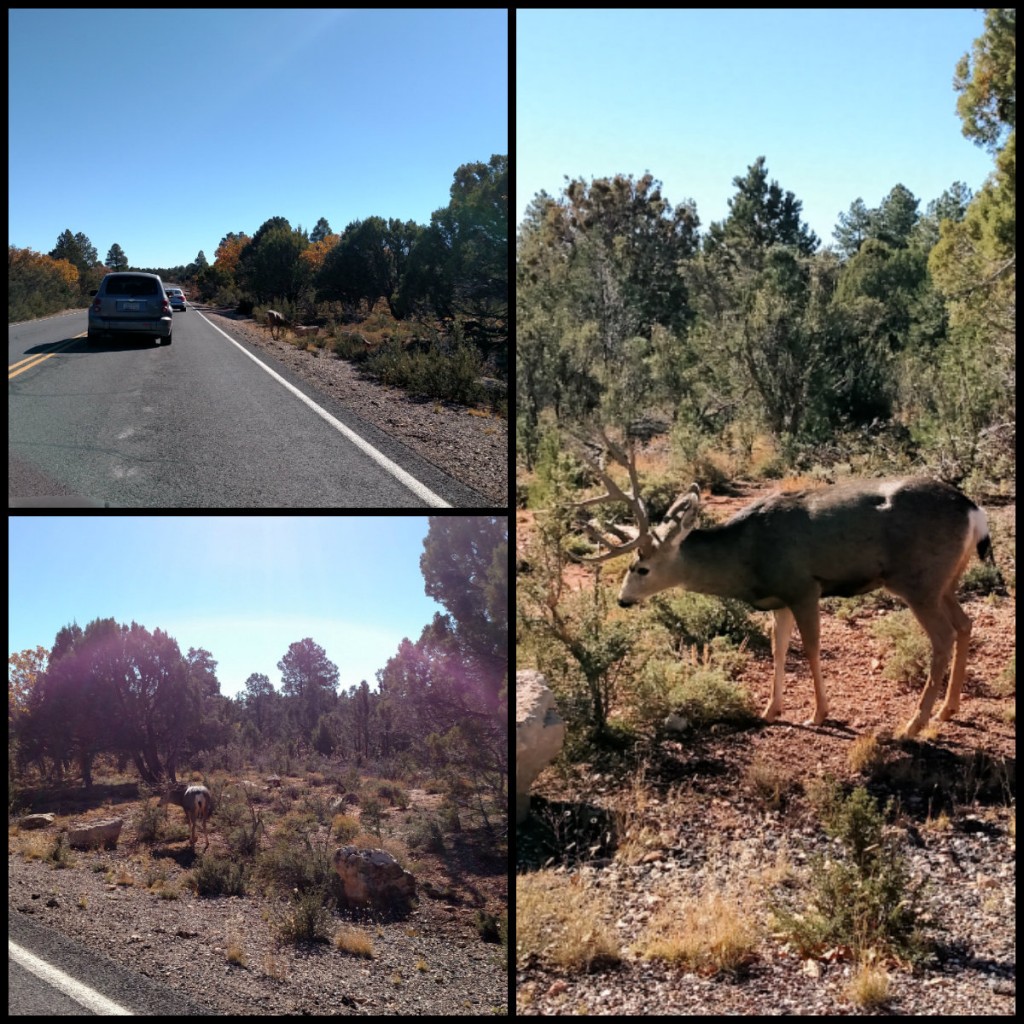 Later, as we drove on around to the Desert View Visitor Center we saw a mule deer buck ambling along the side of the road. He was slightly more friendly than Mrs. Elk had been. At least he stopped long enough for me to take his picture. 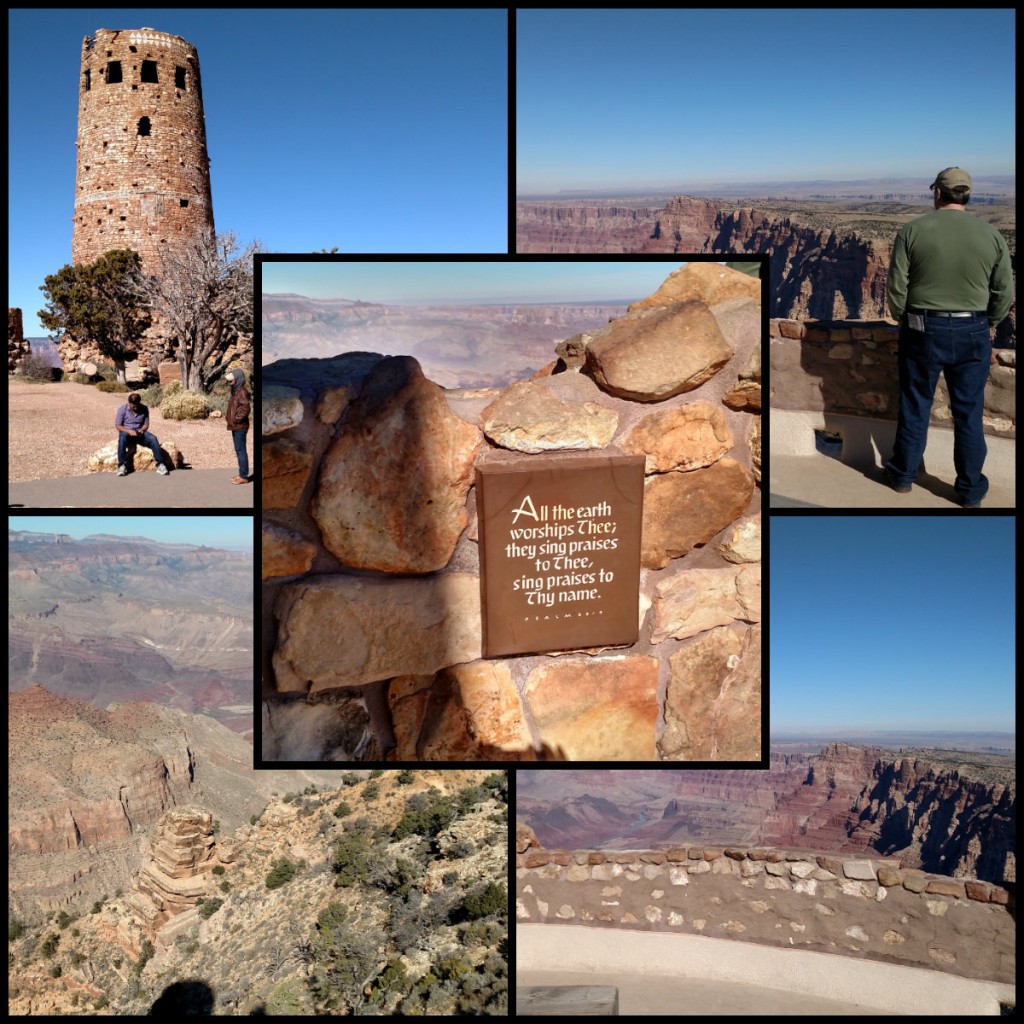 Our last stop was at the Desert View Watchtower, which is not nearly as old as it looks. If it was really ancient I’m sure they wouldn’t let tourists climb all up in it. It was built in 1932 and designed to look old. It’s still a pretty neat structure. And I was pleased to see that the Scripture plaque I noticed last time was still there. 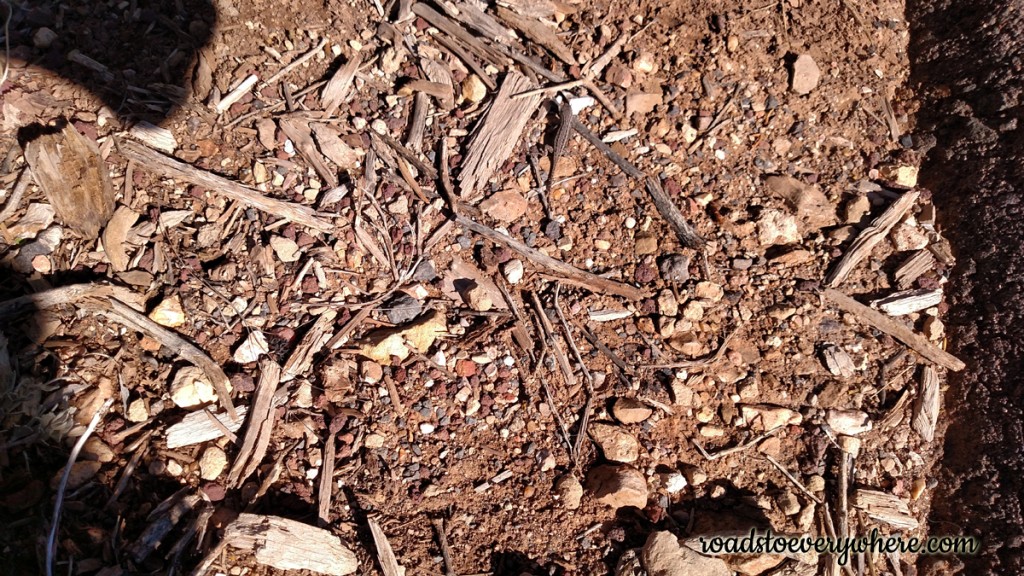 As we walked back to the car we had our third wildlife spotting. Look close. Can you see it? It’s a little brown lizard about the size of my finger.

That’s not a mammal, though. The sign didn’t say how many reptile species were in the Park. I’m not sure I want to know. Cute little lizards I can handle. Snakes? Not so much.

Guess we’ll have to go back sometime to try to find the other 89 mammals.

Well, I’ve kept you long enough. Thanks for coming over to see my vacation slides!