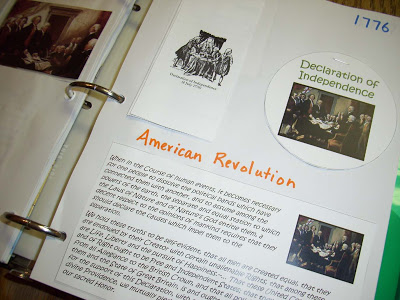 Awhile back I mentioned that we were taking a notebooking approach to American History. Shawntele @ Saved by Grace asked to hear more about our notebook so I promised to post about it. It’s actually more of a scrapbook. I’m not sure if or how that differs from what other homeschoolers calling “notebooking” but it’s more cut-and-paste than it is writing.

First of all, I got a ream of pre-drilled 3-hole paper. (You can punch your own. It just happens that my husband works at a print shop so I have access to handy things like that.) I also got a set of plastic tabbed pocket dividers. Other basic supplies are markers, scissors, glue. I wanted one two-page spread for each year, so I wrote the year in blue on the top right corner of each sheet. We started our notebook in the mid-1700s, but I plan to go back and add earlier history later.

My absolute favorite resource for our notebook has been the lapbook sets from A Journey Through Learning. I got the century overview sets for the 17th, 18th, 19th, and 20th centuries. (You can get the Overview of the 17th Century for FREE by signing up for their newsletter.)

I was so pleased that they contain all the major highlights of American History. What I really appreciate about these sets is that they contain study notes for all the cut-and-paste activities, so you’re not just putting in a random event, you actually have an article about that event to read and learn from as you go along. We usually glue the articles right into our scrapbook, too. Sometimes we fold them up and sometimes we just trim around them and glue them flat. 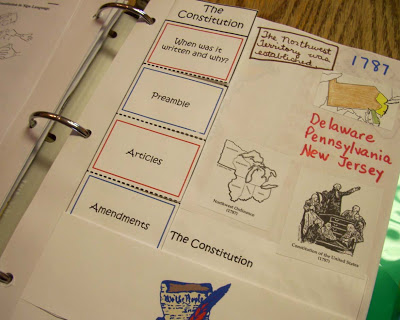 We are also using our Sonlight timeline figures, along with various other printables that I have found other places. We list the states (along with a small map) on the years they became a state. 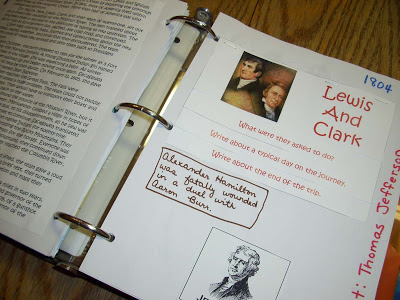 Along the right side of the page we write the president’s name. When I have found multiple pictures of a particular president, we just put his picture on other pages during his term of office. If I can’t find clip-art for a particular event, we just hand-write it in and draw a border around it.

We put in the dividers between centuries and use the pockets to store clippings that we haven’t studied yet. We often find ourselves flipping back to years we’ve already covered to add something new we learned. This approach has been very help as a great way to learn, review and reinforce events that would otherwise “not stick” in my daughter’s memory.