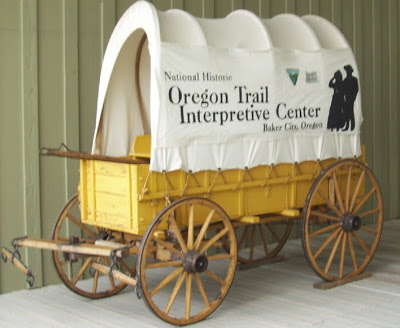 As we’ve been studying the American Revolution this year, I have wished we had the opportunity to visit some of the historical sites — Boston, Philadelphia, Williamsburg, Washington D.C… Living “way out west” is kinda unhandy for field trips to such places, though we do hope to make such a trip before too long, possibly next year.

In our history studies this year we are now into the 1800s and have been reading about Lewis & Clark, and the Louisiana Purchase. Emigration on the Oregon Trail started in about the 1830s so I told my husband last week that the next time we had a chance I wanted to visit the Oregon Trail Interpretive Center in Baker City, Oregon.

As it turns out, that chance came sooner than I expected! My husband had a delivery to make to Boise yesterday, and the quickest way to get there is actually to go west into Washington, then south through Oregon, and then back into Idaho. There is no north-south Interstate in Idaho, so “going around” is faster. That route takes us right through Baker City. We stopped at the museum on our way home.

A friendly little old man greeted us as we came in. He asked the girls why they weren’t in school. They told him they are homeschooled. I said, “This is school, right?” He said, “Oh, don’t tell them that! Then they won’t want to do their book work!” He gave them each a workbook to fill out as they went through the center. I thought that was great! It forced them to slow down and read the signs. 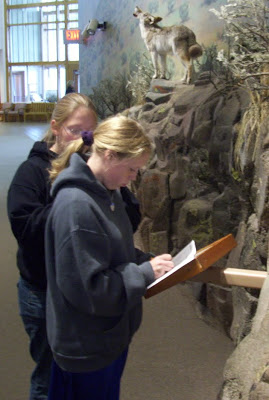 The life size exhibit of wagons, taxidermied animals, and mannequins to represent the people made the hardships of the trail come alive for us. 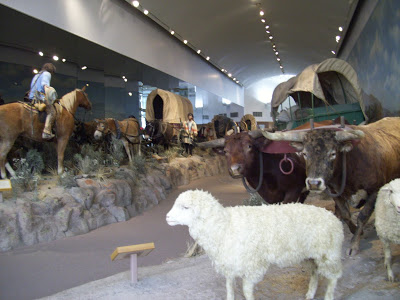 I was amazed to learn that most of the people actually walked the entire 2,000 mile trip. The wagons were much too full, small and bumpy to ride in. For sure, they were much smaller than I had envisioned them when I was a kid! 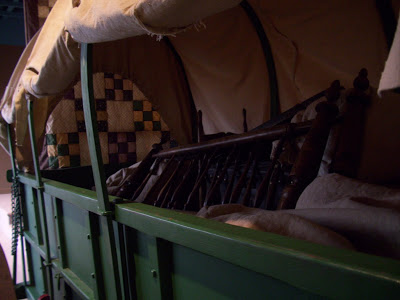 One exhibit had blocks to represent the various things people took along, with a scale-size wagon to load the blocks in. My daughter decided that the “whiskey” could definitely stay behind. I said, “But what if you need it for medicine?” 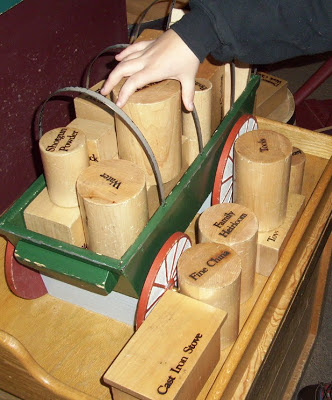 “Nope,” she told me. “We have a smaller box of medicine.”

“Yeah, but what if someone has to have his leg amputated and you need it for him?”

“Too bad. He’ll just have to endure.”

I’m sure the decision-making process wasn’t quite that easy. Can you just imagine having to narrow your possessions down to what would fit in such a tiny wagon, realizing that most of the space is needed for food and supplies for the trip? And knowing that you’ll never be back again?

This is why we study history. It’s good to think about these things.