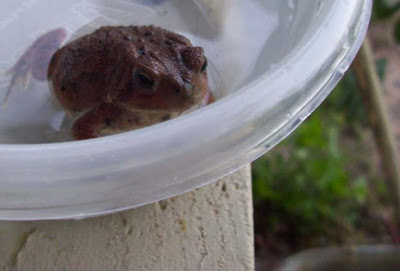 The first evening Becky and I were here in Arkansas we went for a little walk down the driveway. The irises are blooming and I decided to cut some to take in to Mother. As I stepped across a pile of dried leaves near the basement door something jumped out. It startled me momentarily until I saw that it was a cute little toad.

I quickly caught him and handed him to Becky, who was just delighted. She found a little dish for him to sit in and enjoyed visiting with him for an hour or two. She called him “Mr. Toad” and asked him to kindly sit for a photography session before she let him go.

So I told her how years ago, back when this house belonged to her great-grandparents, the washer and dryer were in the basement which is accessed from the outside. In the basement lived two happy toads who were friends of Grandmother. She would visit with them  when she went down to do the laundry and she called them “Winkem” and “Blinkem.” 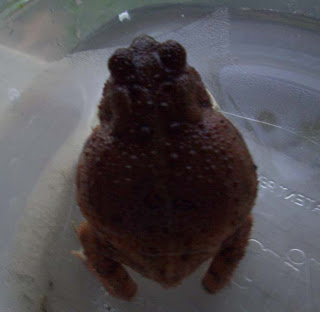 Would you believe this very toad is Winkem and Blinkem’s great-grand-toad? It’s true! And his name is Nod, of course.

Unless he’s actually the original Winkem or Blinkem… I just googled the life-span of toads and it turns out they can live up to 40 years. So I guess it’s possible. We’ll never know, since he only introduced himself as Mr. Toad. I wasn’t well-enough acquainted with Winkem and Blinkem to recognize them myself.

What do you think, Rachel?