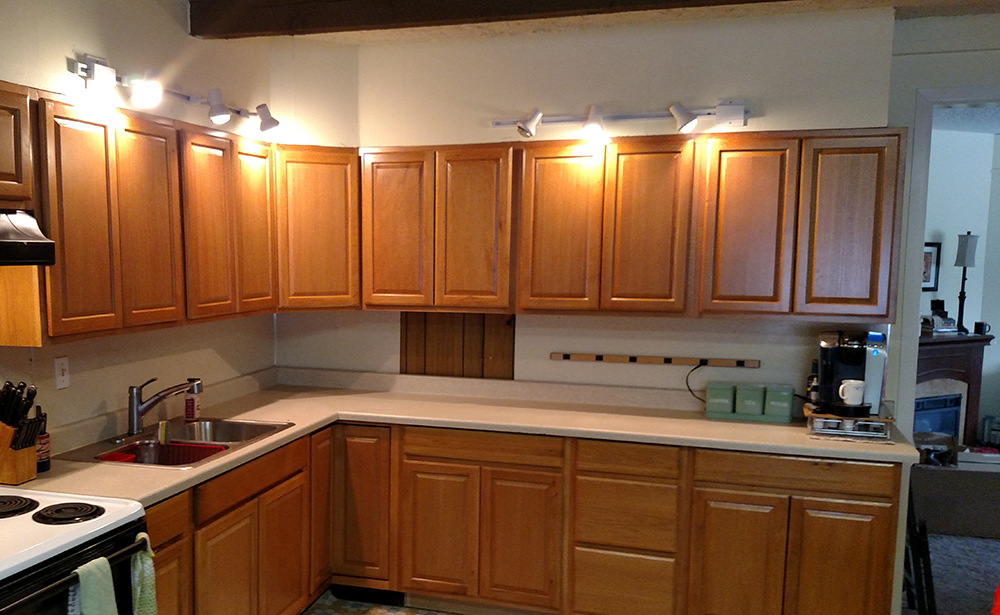 At the beginning of winter I set a goal to reorganize my kitchen. I also wanted to clean out the pantry shelves in the utility room and decide what should actually be in the kitchen.

Before I got around to working on that project my brother-in-law (who owns the apartment where we live) decided to install new cabinets. 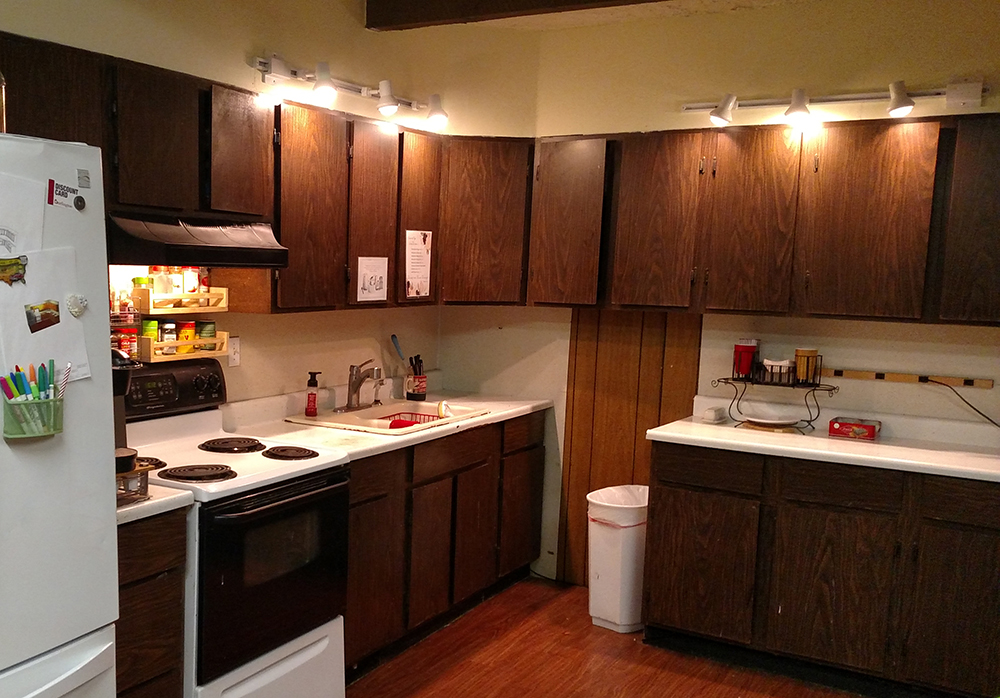 The old cabinets didn’t look all that bad, though I never was a fan of the dark wood grain look–especially in a home with very little natural light. 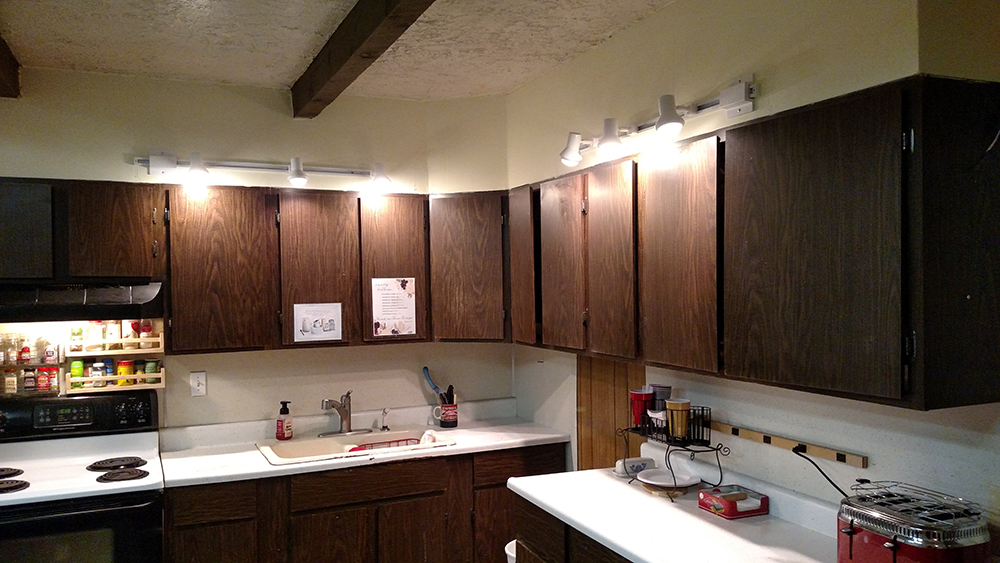 However, they were beginning to disintegrate on the inside… missing shelves, drawers not sliding properly, that kind of thing. 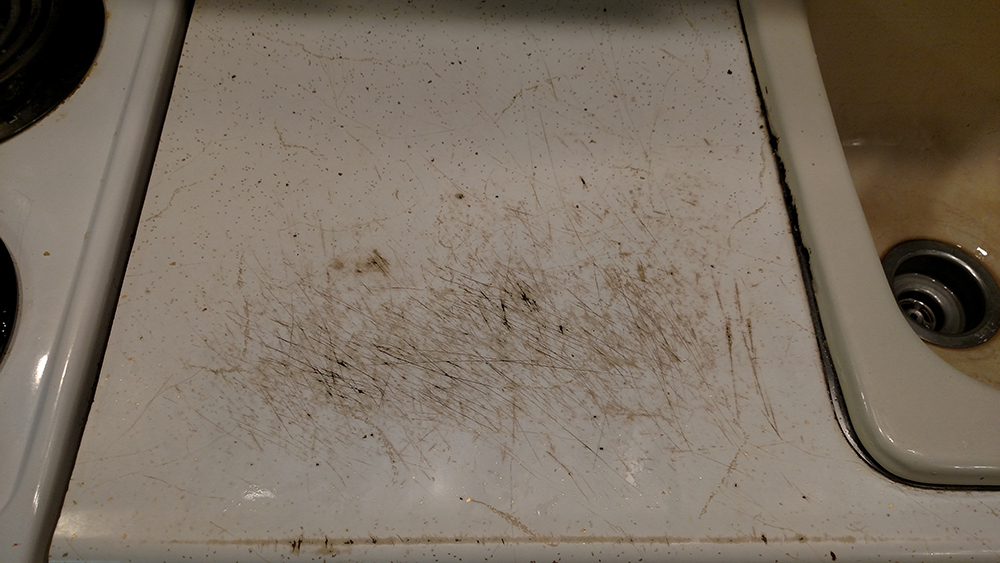 The countertops were in horrible condition. Especially this area next to the sink where some previous tenant failed to use a cutting board. That was as clean as I could ever get it. 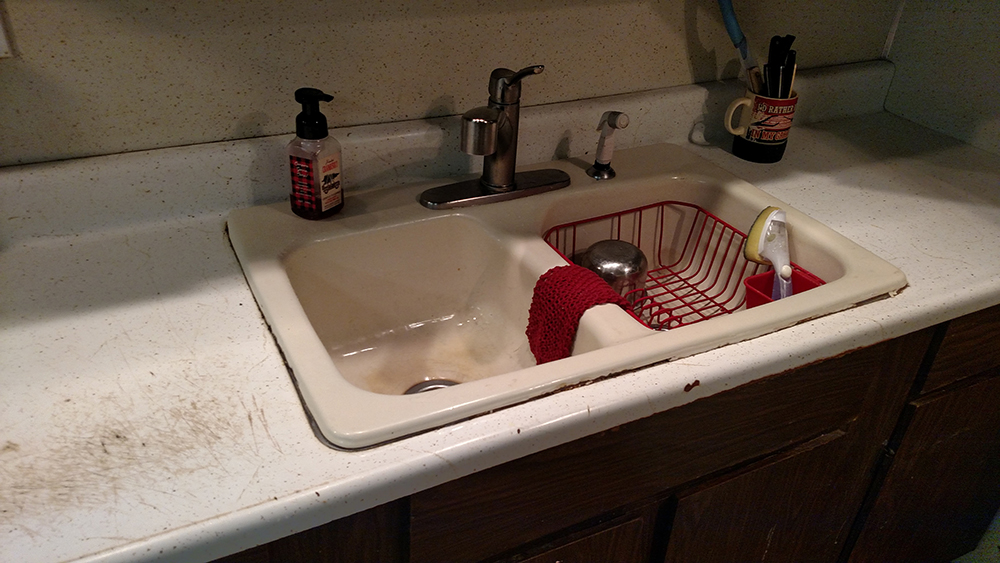 The old sink was cast iron covered by enamel and so hard that we found it impossible to use actual glasses. We broke practically every one we had within 2 or 3 months of moving in, just by bumping them on the sink accidentally. (Lyle had installed a new faucet for me last year, so that part was nice.) 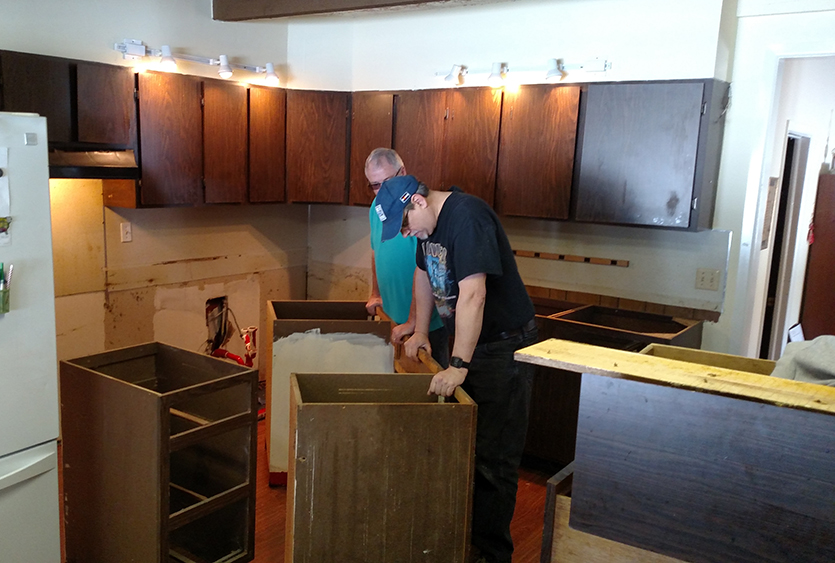 Finally, one Saturday in March, the guys started tearing out the old cabinets. 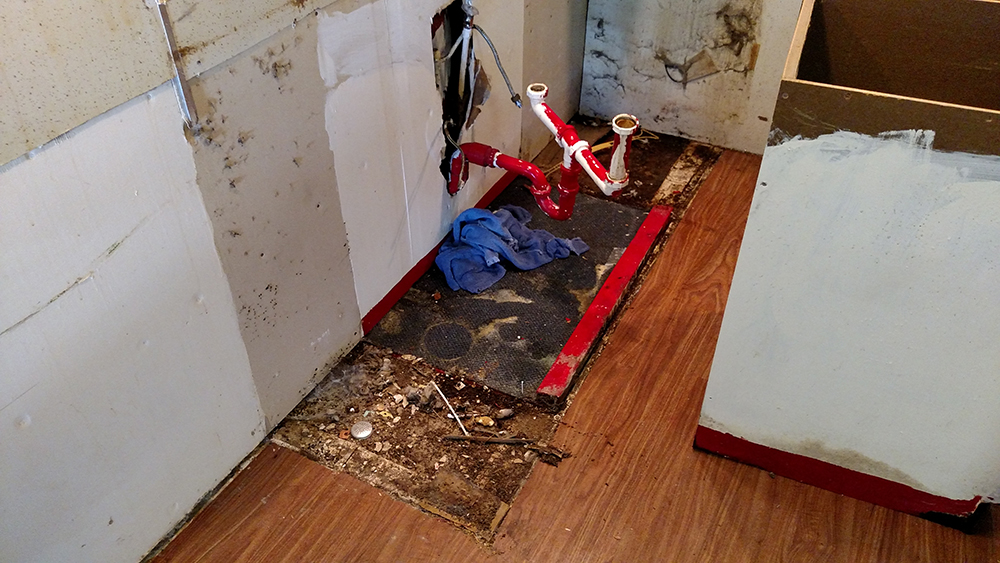 They ran into some major issues with the drain– water spurting everywhere and I don’t know what all. (I have no idea why the drain and other “accent” areas were painted blood red at one point in time. Some things are best not to question, I guess.) 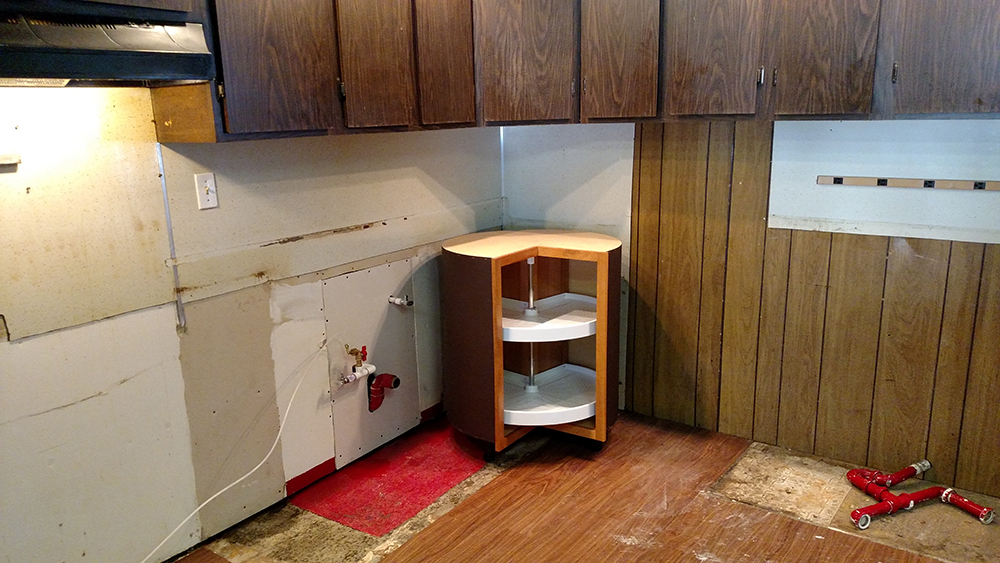 After several hours of dealing with the water problem, they finally got the first new cabinet piece in place. 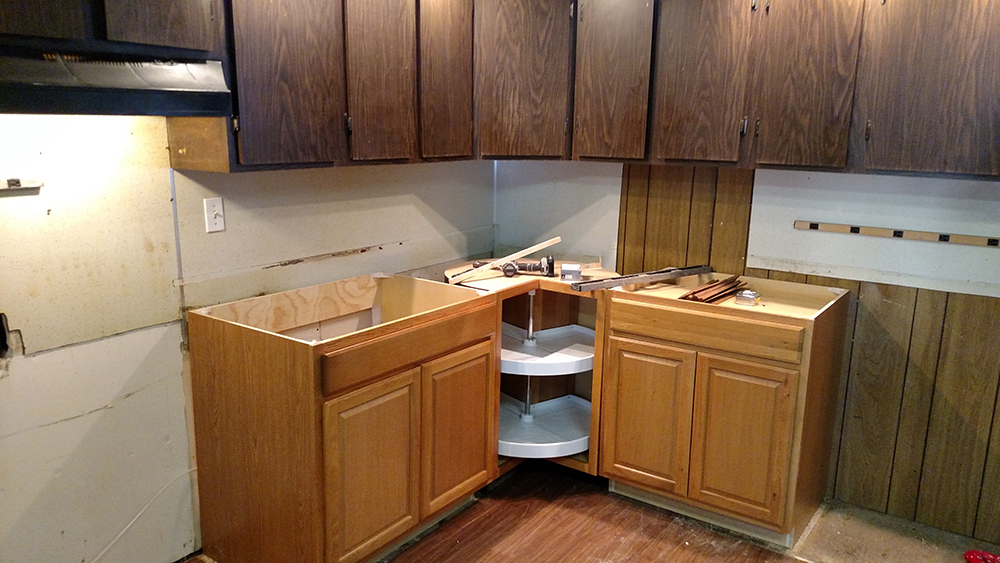 It didn’t take them long to build out from there. 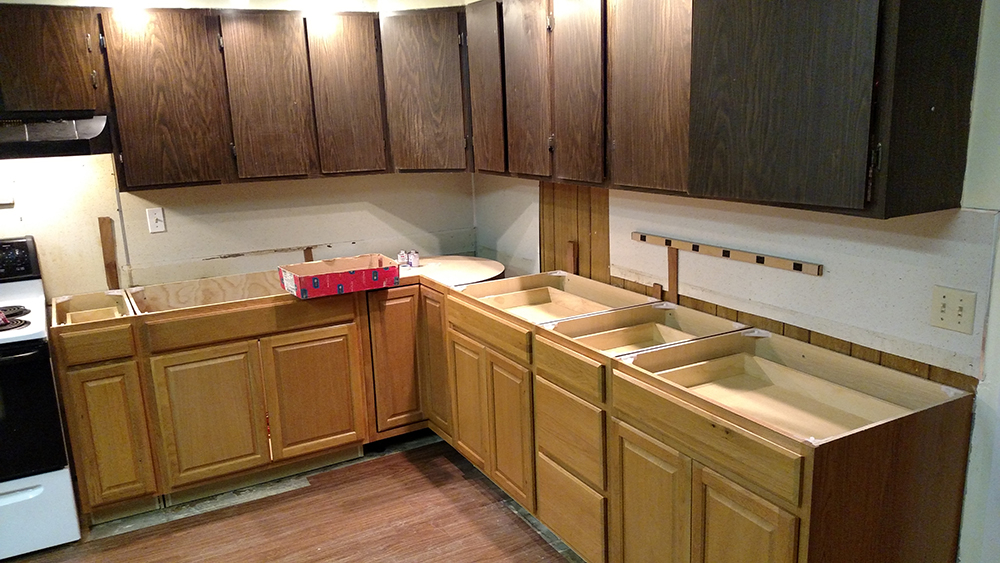 This is what it looked like when they were done for the day that first Saturday. 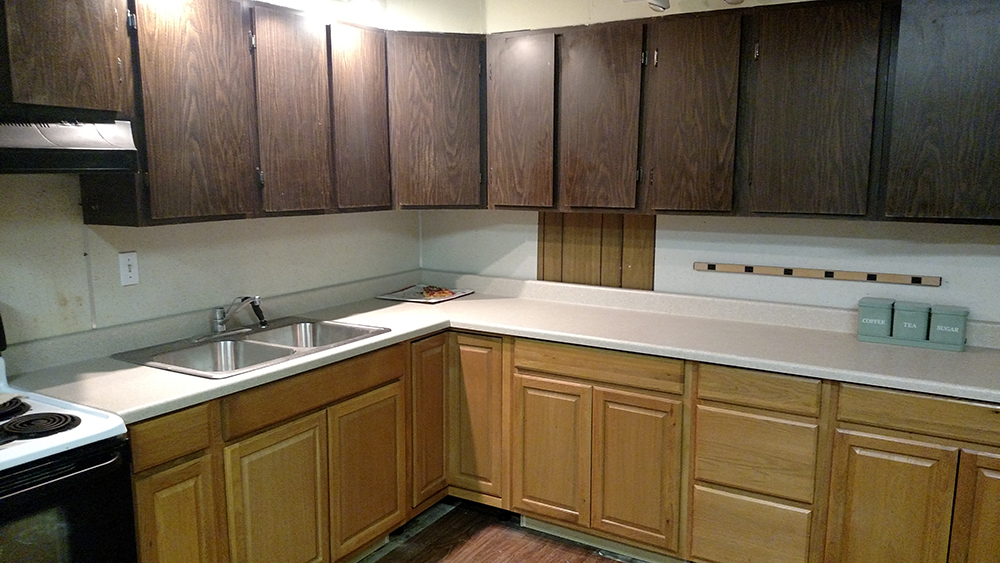 The following Wednesday the counter guy came to install the counter tops and put the sink in place. We lived without water at the kitchen sink for a week.

That was highly inconvenient, but it could have been a lot worse. At least there’s a utility sink in another part of the building where we were able to wash the dishes. 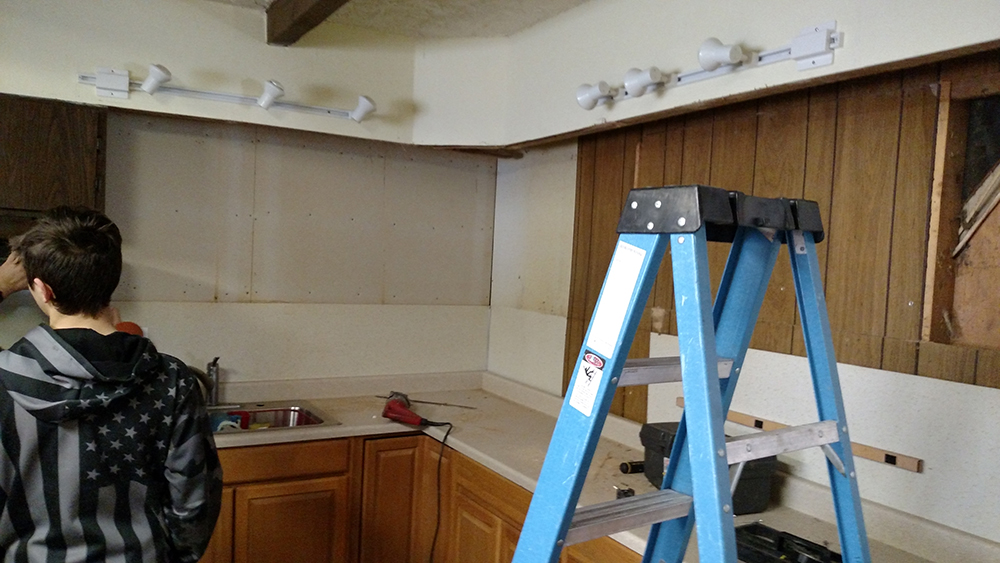 About a month went by before the guys had another Saturday available to do the upper cabinets. We never knew what they would uncover as they tore into it. In this case, it was a combination of paneling (2 styles) and sheetrock on the walls. 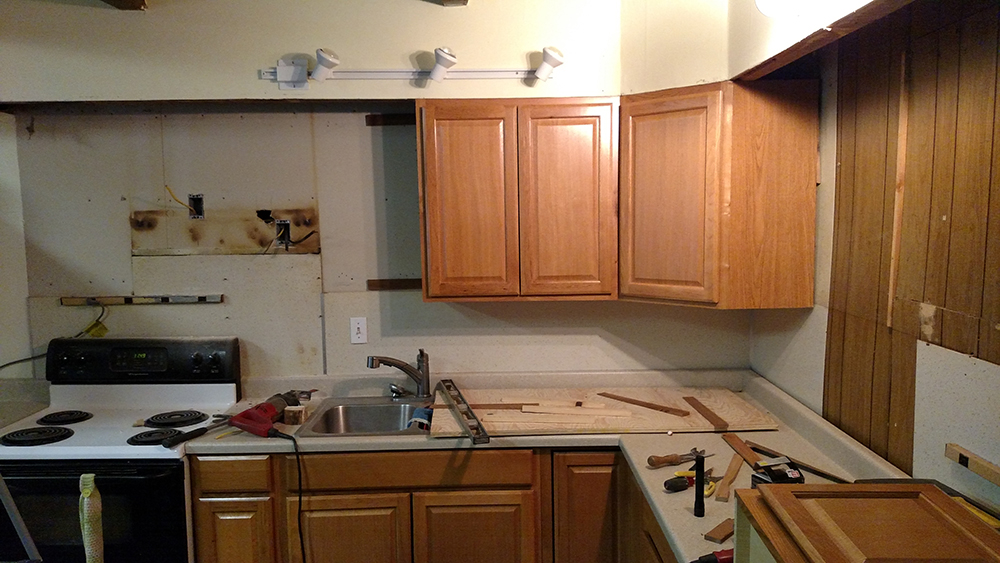 The main issue that day was moving the electrical connections for the stove hood over a few inches. The new cabinets are slightly wider than the old ones so the sink and stove have needed to shift over a bit, plus the new sink is a little bigger than the old one. 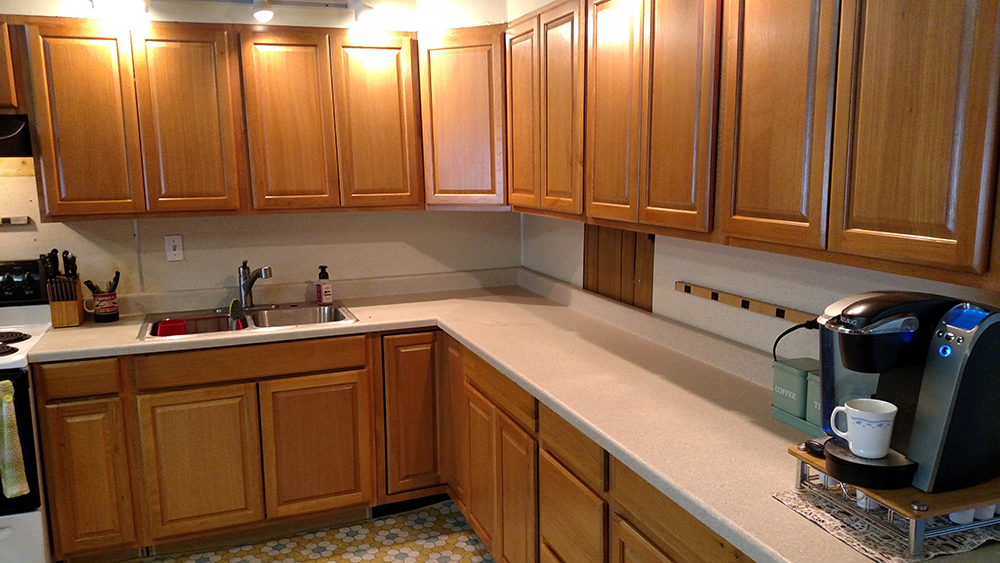 At the end of that day (this past Saturday) they were done! We still want to do something different with the backsplash area, but that’s pretty minor.

I am so pleased with how much warmer and lighter (not to mention cleaner) the kitchen looks!

Now to tackle the pantry shelves. I guess that will be my Spring Cleaning project.