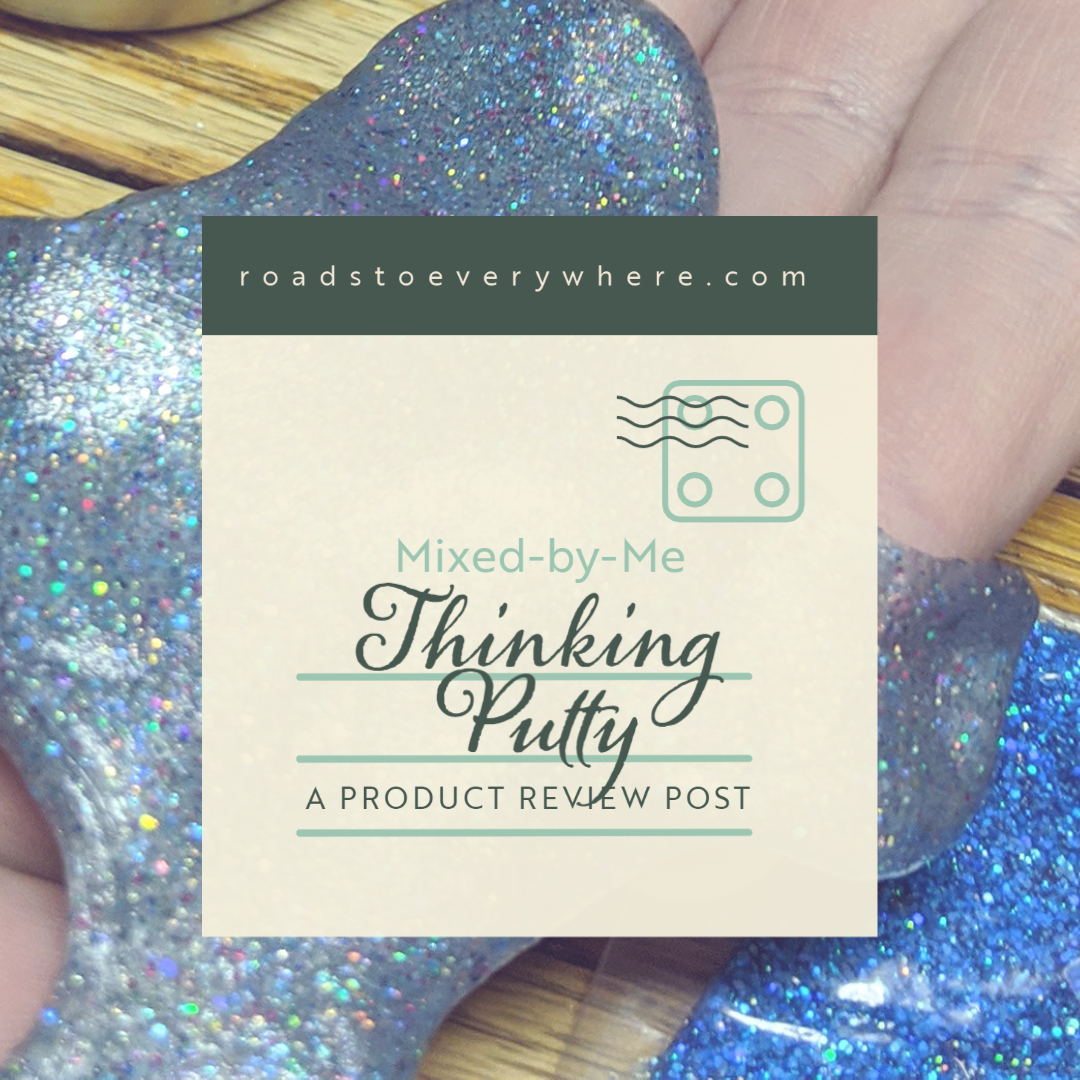 Next up in my series of off-screen entertainment gift ideas for the whole family is Crazy Aaron’s Mixed-by-Me Holographic Thinking Putty Kit. As usual, I need to mention that Timberdoodle sent it to me in exchange for my review.

The first thing you should understand about Thinking Putty is that it’s not slime. I know slime is super popular right now, but I can’t stand the stuff. I was fascinated with it when I was in about the 5th grade, the first time it trended, but now it just reminds me of snot. Who am I kidding? That’s what it reminded me of then, too.

Okay, so this is not that.

It’s a putty, obviously. Kinda like plumber’s putty or an artist’s kneadable eraser, but more like Silly Putty. Only better.

It’s called Thinking Putty because it’s meant to be used as something to fidget with while you’re concentrating or reading. I happened to have a tin of it along on our last camping trip. When I pulled the Scrabble game out of the cupboard I nabbed the Thinking Putty as well.

I don’t know that it actually helped me win the game. But I did win. Just sayin’.

Crazy Aaron’s Thinking Putty comes in a wide range of colors and effects. I think the one I had while we were camping is glow-in-the-dark. Another kind is color-changing. The one I’m going to review today is “holographic.”

The unique thing about this kit is that you get to mix your own colors and effects to come up the combination you like best.

One side of the laminated mat has several illustrated formulas showing what size of globs to use in what colors. I decided to try one that I was pretty sure would come out in some shade of green.

Wha’d’ya know? Blue and yellow do make green! Not loving that shade, but maybe it will be better once it’s mixed with the clear and not so concentrated.

I love the way Thinking Putty can be stretched and twisted. This is something I like to do with the Hypercolor variety. The color changes with the warmth of your hands, so I leave half of in the tin and work the other half until the color changes. Then I twist the two pieces together until they merge into one color again.

Here’s what my green mix looked like after I worked it into the clear glob. Better, but still not my favorite shade of green. I put it in the tin for now, but I may work on it some more later. Maybe it needs a little more blue.

I recruited a couple of helpers for this review. They ignored the formula mat and came up with their own combinations.

Shiloh was very conservative in what she added to her batch. I think maybe Opal-izer and a little Holo-izer and no color.

Super iridescent! She named it Milkyway.

She named hers Starstruck. They definitely had a theme going on there. Maybe I should name mine Terra Green (borrowing from the Astrobright paper colors)!

If you can’t tell by now, I love Thinking Putty! I keep a tin on my desk to stretch and twist when I’m on the phone, in a meeting, or watching a video.

The Mixed-by-Me Thinking Putty kit would make a fun Christmas gift for the family as each one could mix their own tin as a group activity during the holiday season. If you have more than 5 kids, you’ll want more than one set. Your options are: Glow, Hypercolor, or Holographic.

I still have a couple more reviews of other great products from Timberdoodle to share this week. Stay tuned!