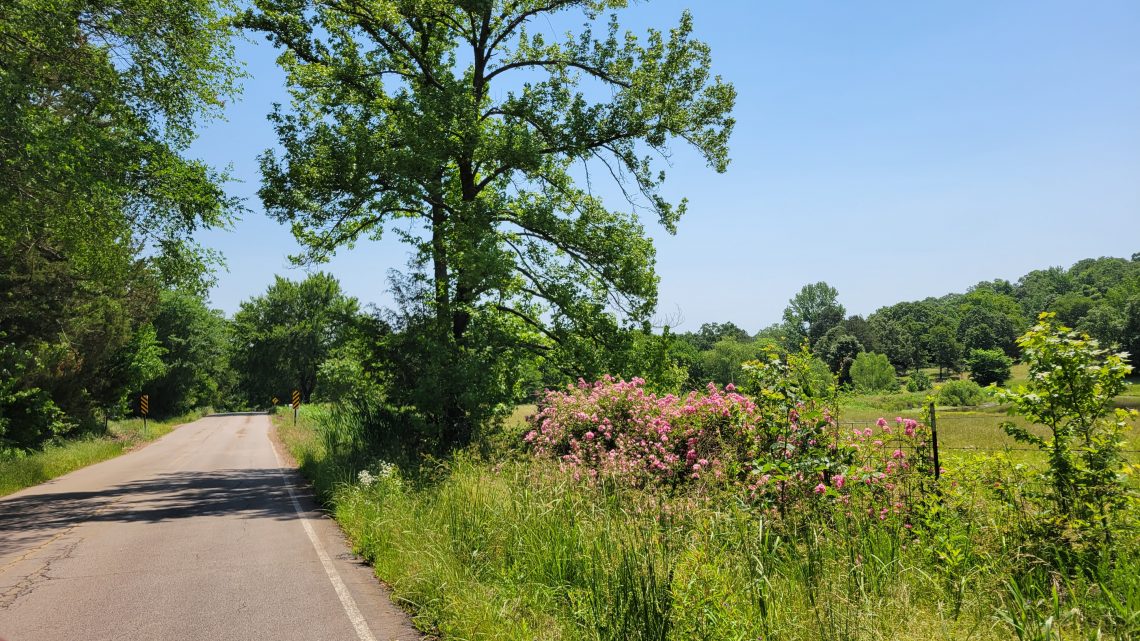 For our Memorial Day adventure this year, we decided to visit several ancestral cemeteries. This is the first time I’ve lived near where any of my ancestors lived, so it was interesting to me to find where some of them are buried.

I did a little research ahead of time to figure out where to go. My mother and Rebecca were interested in going with us, which made a foursome for our outing. We packed a picnic lunch, and early Monday morning, we set out.

Our first stop was more of a historical marker on a small triangle of ground at the intersection of two roads. The Francis Marion Easley listed on the monument is my great-great-something uncle. He was a brother of my 3rd-great-grandfather, Burnet Easley. They and another brother went west in the gold rush of 1849. Francis is the only one who returned.

This James Ingram was married to Francis’ half-sister, Sarah. Is there such a thing as a half-brother-in-law? Anyway, that’s the connection.

Next, we visited Butler Ford cemetery, where our earliest-known Easley ancestor is buried. Lyle and I had been there once before, many years ago, with my grandparents.

We had to do a crayon rubbing in order to read the headstone. It was very windy, so I held the paper while Rebecca did the rubbing and we watched the engraving “magically” appear.

I was pleased to see that someone had put flowers on all the graves. We had brought along some flowers for that purpose so I just added ours. We didn’t “know” anyone else buried in Butler Ford.

The third cemetery was the one we discovered last fall, where Burnet Easley’s widow, Dorinda Blackburn, is buried. Hers is the only one we are connected to there, as far as I know. We visited her parents’ grave in Oregon a couple of years ago.

Our most interesting visit of the day was Rieff’s Chapel Cemetery. Lyle and I had also visited it years ago with my grandparents. It was so hard to find that time that I was afraid we might not be able to locate it again. (It’s on private property back through somebody’s peach orchard.) However, I was hopeful that we might have better luck thanks to GPS and satellite imagery. That turned out to be the case, and we were able to go right to it.

Many of the graves at Rieff’s Chapel are our generations-removed kinfolk, including four of my direct ancestors. Rev. Thomas Moss Brinson is my 3rd great grandfather. My great-grandfather, Frank Moss Easley, was named after him. (Thomas was Frank’s maternal grandfather.)

Thomas’s wife, Mary “Polly” Rieff Brinson, is buried beside him, though her grave appears to be an above-ground vault. It doesn’t show up in the picture but we were able to make out the inscription to confirm that it is indeed her grave.

Polly’s parents, John and Hannah Rieff, are buried nearby. Hannah’s grave is the same style as Polly’s. John’s broken headstone lies on top. I don’t know if he’s in the same grave or if someone just laid his stone up there after it broke.

I would have enjoyed spending more time at Rieff’s Chapel, making connections to the other graves there, but we needed to move along.

Our last visit of the day was to a more modern cemetery where one of Granddaddy’s first cousins, Marvin Easley, is buried. Mother told us that Marvin had a feed store in that same town when she was a little girl. Her family lived in southwestern Oklahoma at the time, but once when she was about eight years old, they were on a trip and stopped to visit Marvin at his store. Or at least Granddaddy visited Marvin. The kids had to sit in the car. Mother said it seemed like Granddaddy visited for hours before he came back out, and they continued on their way.

As we headed home, we “girls” agreed that it had been an interesting and fun way to celebrate Memorial Day. Lyle was maybe not quite as enthusiastic about it as we were, but as always, he was happy to do the driving and good-natured about all the family history.