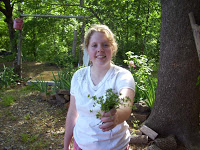 The second day we were here in Arkansas, Becky presented me with a bouquet of tiny wildflowers she had gathered as she explored the farm. I was going to write a post about that, but remembered that I already have. So this one’s a re-run from May 2009:

My favorite playmate when I was a little girl was my aunt, Rachel. She was the expert on… well, everything! Not only did she have the advantage of a year-and-a-half of seniority… she was also the aunt… so that definitely gave her extra authority!

I remember one spring in the early 1970s… we were probably about 7 and 9, or something like that… Rachel introduced me to the joys of Mayflowers! We scoured the hillsides of the Arkansas farm where we lived, looking for tiny little flowers hidden in the grass or fallen leaves. As I recall, there was quite an assortment… but we just called them all “Mayflowers”!

We decided it would be a fantastic idea to make lovely terrariums with our precious Mayflowers, so we carefully pulled the tiny plants up by the roots and tenderly transplanted them into the bottoms of wide-mouthed canning jars we had half-filled with dirt. We watered them gently… but to our disappointment they didn’t survive.

Our mothers, however, were appropriately appreciative of the beeeeautiful bouquets we presented them with!

Years later, when I was an adult, Grandmother told me, “Rachel always brought me the first tiny flowers of spring when she was a little girl.”

I hadn’t realized it was something she pursued every spring.

I guess there’s just something enchanting about finding touches of beauty in unexpected places.