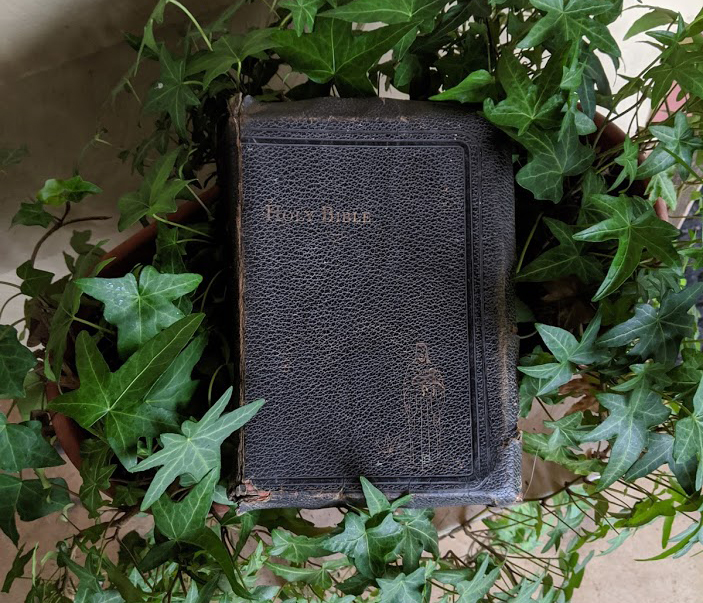 The fourth family Bible in my collection belonged to my paternal grandmother, Annie Matil Jarrell Ezell. She lived from 1919 to 2009. We called her MawMaw.

My sister first inherited MawMaw’s Bible, but when she found out I had inadvertently started a collection of heirloom Bibles she passed it along to me.

The presentation page indicates that MawMaw got the Bible in 1952. Since it doesn’t say who gave her the Bible we are assuming she probably bought it for herself.

It’s quite an interesting Bible with lots of features you don’t often find in a Bible. The spine says it’s a “Cyclopedic Indexed Bible, Good Shepherd Edition, Self Pronouncing.”

I’m not sure what “Good Shepherd Edition” means other than that there is an image of the Good Shepherd debossed on the front cover.

“Cyclopedic” probably refers to pages like this: a dictionary of the Bible with actual photos…

…also, this section with charts illustrating the chronology of the Old Testament. I could pore over that kind of thing for hours.

As a kid, though, my favorite pages were the beautiful double-page spreads with full color pictures of different Bible stories. I thought all Bibles should include colored picture pages like that.

By this stage of my life, however, as a family historian, I am most interested to know if there are family history pages. It appears that the Bible originally included a Family Register and Military Service Record, but those pages are now missing, along with the first few chapters of Genesis.

However, I did find a few little tidbits of family history elsewhere. On a couple of the blank pages in the back MawMaw recorded the marriages of Uncle Ronald and Aunt Barbara, and my parents. (Rhonda is one of my cousins. I’m not sure why her name is on that page.)

A torn newspaper clipping tucked in the Bible has the birth announcement of another of my cousins. I’m not sure how that managed to stay in the Bible all these years when the actual bound-in pages didn’t.

Fascinating stuff, but I wanted more stories than that, so I called my Dad. He didn’t remember much about MawMaw’s Bible but he enjoyed looking at it with me. I asked him when MawMaw got saved. He couldn’t remember exactly, but he knew it was when he was a little boy. He offered to call his older sister (my Aunt ‘Lene) to get more details.

Apparently their uncle lived next door to the Nazarene church, and their older brother (my Uncle Lynwood) was a classmate of the pastor’s son, so they started attending Sunday School with their cousins.

Aunt ‘Lene says she remembers the service when MawMaw went to the altar. Their youngest sibling (my Aunt Dianne) was a babe in arms and one of the church ladies took her so MawMaw could go pray. The baby was upset to be handed off to a stranger and was crying loudly. Aunt ‘Lene, who would’ve only been about 8 at the time, went back and offered to take her little sister. The church lady didn’t know who this little girl was but when someone told her she was the baby’s sister she handed her over. Aunt ‘Lene said Dianne immediately stopped crying.

This family snapshot was taken a year or two later, but you can see that little Dianne still turned to her big sister for comfort.

We also came across this picture of the church congregation about that time.

After studying it closely, Dad thinks he’s the little boy on the left end of the front row in overalls. The little blond curly-haired girl in the middle of the front row is probably Dianne, and the boy beside her in the striped shirt and jacket may be their brother Ronald. We weren’t able to identify anyone else in the picture, though Dad said the lady on the right end with the accordion is probably “Sister Martin.”

The lines have fallen to me in pleasant places;
Yes, I have a good inheritance.