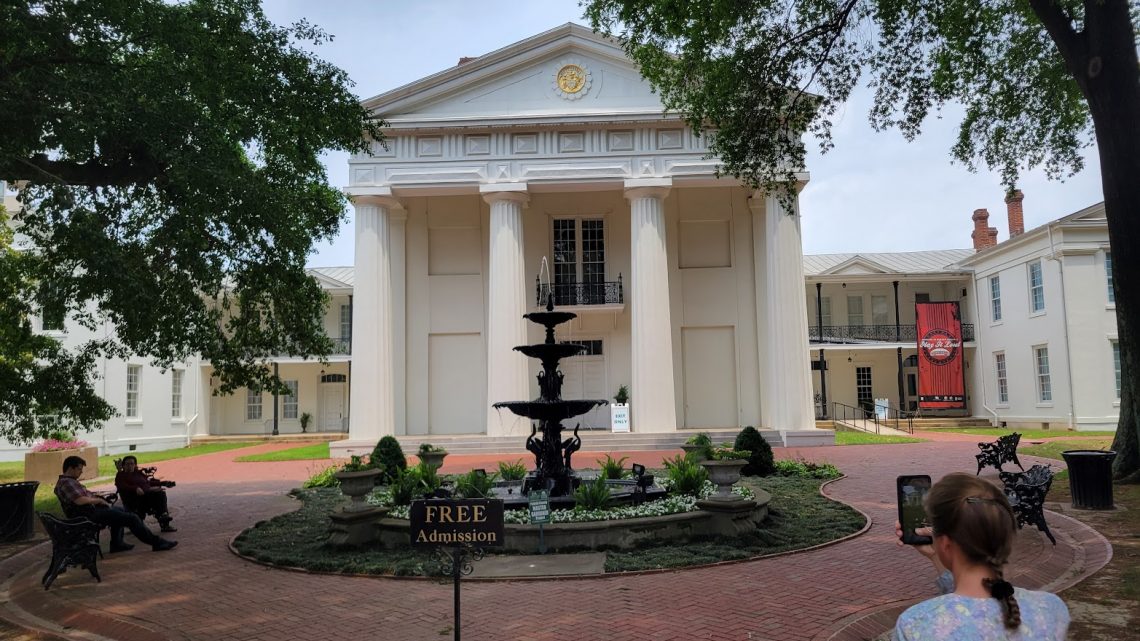 Last Saturday, we took a day trip to the Territorial Fair at the Historic Arkansas Museum in downtown Little Rock. We also visited the nearby Old State House Museum.

Our “tour guide” was our friend Janet who met up with us for the day’s adventures. She even dressed the part in an old-fashioned schoolmarm outfit.

Neither Lyle nor I had been to Little Rock before, other than just passing through on the Interstate. Janet remembered visiting these historical places on a 5th-grade field trip. It was fascinating for all of us.

The blacksmith shop was the first stop on our walking tour through the little village. The blacksmiths invited visitors to come right in. Blacksmithing is not exactly something visitors can be hands-on with, but we were able to watch as long as we wanted and asked many questions.

I learned that the fire is fueled with coal, but only certain types of coal are suitable for a blacksmith forge. Also, the name “blacksmith” comes from the color of the finished product, plus “smith” evolved from “smite,” which is what he does to the iron. Blacksmith shops are kept relatively dark so that the smith can see the color of the fire and the iron as he works. If it’s too bright they can’t see those details.

There were several hands-on demonstrations in different rooms of the dogtrot cabin.

I was especially interested in the fiber processing demonstration. There were samples of cotton, wool, and flax. I have never worked with flax before, and I was surprised at how soft it is. The lady told me that you have to keep the fibers wet to spin it. That’s why linen is not as common as cotton and wool fabric. There were also various plant-based dyes and different types of drop spindles.

In another room we “made” soap balls–which consisted of pinching off a chunk of soft pre-made lye soap, forming it into a ball with our hands, rolling it in sand and fragrant herbs, and then working them in and re-rolling the ball.

Since I had recently had a lesson on making lye soap I was interested in this process. The “historical” soap was much softer and more pliable than what I had made before. I asked how they made it. Turns out it’s 7 parts lard to 1 part lye water. (At least I think that’s what he said.) My soap-making friend and I used a blend of palm oil, olive oil, and coconut oil rather than lard, and our ratio of lye water was a good bit higher. Also, adding fragrance oils or essential oils is much more effective than using fragrant herbs. Still, it was interesting to know about this process as well.

Just as we were ready to leave this area a group of singers in period costume casually gathered, just as if they were neighbors and started singing spirituals. It took us a minute to catch on that this was a reenactment because it was done so naturally.

Lyle was especially interested to visit the print shop.

While he’s never printed on a press like the one on display, he is familiar with the process, so he didn’t really learn anything new. He thought it was interesting that there was a bed in the room with the printing press. There have been times in his career when that would have come in handy.

He learned to hand-set type when he was a teenager in his dad’s print shop. However, he said he had never set anything as complex as a newspaper page. Mostly they did business cards and smaller flyers.

The ladies offered a honey taste test with honey from hives in two different Little Rock neighborhoods. One was lighter in color than the other and had a milder taste. Fascinating!

The smokehouse was another place where I learned something new. I had not realized that the smoke doesn’t act as a preservative. It’s to keep the bugs away while salt cures the meat. The smoky flavor is just a side benefit.

But then that little tidbit went out the window when the guy manning the smokehouse admitted that he was smoking cheese that day, and yes, that was strictly for flavor.

Since Janet was in period dress, I convinced her to pose in the photo-op wagon. She thought I should, too, but I didn’t have the appropriate outfit. She wasn’t convinced that it was properly authentic anyway since there were no horses, but she went along with it.

It was a muggy day. After seeing everything we were interested in throughout the little village, we went inside the museum to browse through the galleries and cool off a bit before heading down the street.

The giant oak trees and ornate fountain on the front lawn of the Old State House made it seem cooler than it actually was. Fortunately for us (if not historically authentic), the building is air-conditioned.

The building has been carefully restored. Many of the rooms are now museum galleries.

I enjoyed the room with the First Ladies’ outfits and jewelry, though I shudder to think how many thousands of taxpayer dollars go to maintain such frippery. I was amused at this dress with hand-painted symbolism on it. The husband (governor) over her heart, the children on the other side, and the state capitol building, etc. across the full skirt. Isn’t that just so precious?

Also, Hilary’s inaugural gown from 1979 was there. It was not beautiful. But then most clothes from 1979 weren’t.

The House of Representatives Chamber is set up the way it likely was in 1836. However, we wondered why they put battery-operated candles and lamps on the desks rather than antiques. It’s not like it would be a fire hazard since they weren’t lit. Also, what are the boxes under each desk? Spittoons, maybe?

There was so much to see and learn that I know we’ll have to go back again sometime.

Have you been to Little Rock?