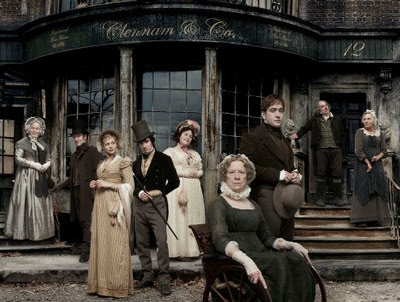 To be honest, I had never heard of Dickens’ Little Dorrit until I saw an ad for the PBS mini-series that is currently running. (And I claim to be well-read! I know! I’m plum’ ashamed of myself!) But, the ad caught my eye and I even talked Lyle into trying it with me.

We watched the first installment the other night, and I’m hooked… but I think I should have read the book first! I’m a little bit lost in some areas. There are characters and scenarios that don’t seem to have anything to do with the story yet, but I’m sure they’ll eventually fall into place.

We were especially amused at the Circumlocution Office! I’m pretty sure I’ve been there before!

Another entertaining scene was when Little Dorrit’s father was bragging about being “the father of the Marshalsea” and being willing to accept “very delicate testimonials”– meaning gifts of money! (I love the euphemism!)

The Marshalsea was the debtors’ prison where the Dorrit family had lived for over 20 years. My question is, what was the point? Someone couldn’t pay his debt so he was locked up until he could pay it? No wonder the poor guy was begging for “testimonials”!

When I think about the conditions people lived in as matter of course in centuries past, I just marvel that the human race has survived to the present day. We are so spoiled!

Anybody else watching this mini-series? If you missed the first episode, you can still watch it online!