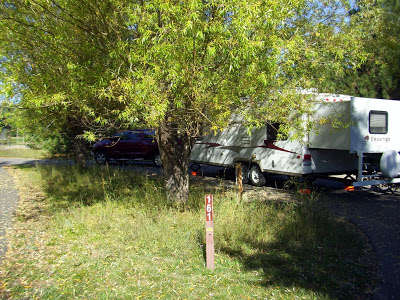 We’re die-hard campers. Not extreme campers, mind you, but we usually go later in the season than most people. The campgrounds are quieter this time of year, naturally, but we also enjoy the fall colors, the cool crisp air and the warmth of the campfire. This past weekend we had sunny skies and brisk temperatures. Lyle and I went for a hike through the damp forest and admired the occasional brilliant maple tree among the still-mostly green woods. Later he took the kids mountain-biking. 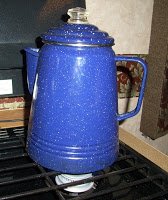 It was great to be outdoors during the day. Late in the afternoon we built a campfire and cooked supper over it, but we didn’t linger around the fire for very long after dark. Once the sun went down, it got pretty chilly. Even though the time hasn’t changed yet, it still gets dark pretty early this time of year. Too early to go to bed, so we made hot cocoa and crowded around the little table in the trailer to play SkipBo. 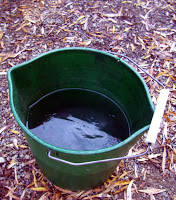 Next morning we discovered ice in the water bucket we keep by the fire. The ground, table, and chairs were covered with frost. So we bundled up, built a fire, and cooked breakfast. The trick was keeping the bacon warm while the eggs cooked. We didn’t succeed. That’s when it turned out to be handy to have power hook-ups. We took the plate of bacon inside and heated it up again in the microwave!

Okay, so we taking this “roughing it” thing only so far! 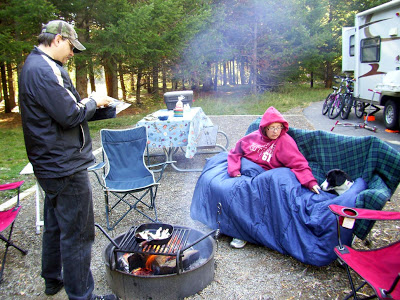 Thus ends our camping adventures for 2010.