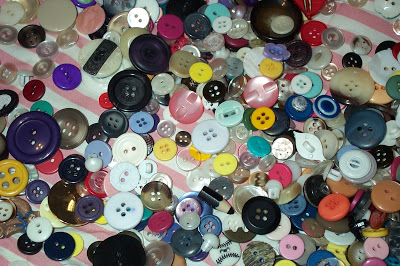 “Ma had saved buttons since she was smaller than Laura, and she had buttons her mother had saved when her mother was a little girl. There were blue buttons and red buttons, silvery and goldy buttons, curved-in buttons with tiny raised castles and bridges and trees on them, and twinkling jet buttons, painted china buttons, striped buttons, buttons like juicy blackberries, and even one tiny dog-head button. Laura squealed when she saw it.” –On the Banks of Plum Creek

Did your mother collect buttons? Mine did. Mother kept her buttons in a clear plastic hinged box that her watch had come in once-upon-a-time. It was always a special treat to get to sit in the middle of the bed and dump out the button box to sort through and admire all the pretty buttons.

A few years ago for a whimsical birthday gift, my mother sent me this honey jar about half full of buttons. Not necessarily special buttons… but just an assortment to start my own collection with. I’ve added a few from here and there and now the jar is almost full. I would love to have vintage buttons, but so would a lot of other people… and I’m not willing to pay the asking price for the truly collectible buttons. So my collection is really just for fun. And my girls enjoy sorting through the buttons every now and then. That’s all that matters, isn’t it?

As I was going through my vintage Workbasket magazines the other day, I came across this article on New Uses for Old Buttons (by Jewell Casey) which I thought would be perfect for this post. I’ll scan the pictures for you and then quote portions of the article, because I thought the lady’s ideas were actually very interesting. Her projects are a hokey, yeah… but that just adds to the charm, I think.

My liking for buttons–big, little, bright colored or drab–goes back to my early childhood. My mother permitted me to empty the contents of her button box upon the floor, and for hours I would amuse myself by stringing buttons and making them into all kinds of bracelets, belts, necklaces and many other ornaments for myself and my dolls.

So, it is not surprising that recently when I had the urge to make several gifts that would be pretty, inexpensive, useful and different, I reverted back to my childhood pastime of “playing with buttons” and have been highly pleased with the results.

Digging out the old family button box–containing some of the same buttons I played with in the long ago–I found many unusual ones that have been saved down through the years because of either their size, shape, color, or just because they were buttons and might come in handy some day! Then, no sooner had some of my friends heard of my latest project than they showered me with buttons.

After adding to my button collection, old pieces of costume jewelry, odds and ends of ribbon, florist wire, floratape, household cement, needles and an assortment of colored thread, I was ready to begin playing in earnest. Experimenting a little while with buttons of different shapes and colors, I soon got the knack and made quite a variety of articles. Photograph 1 shows a bracelet, stickpin, hatpin, cuff links, jeweled safety pins, brooch and earrings which I designed and made.

For the bracelet I selected sixteen buttons, near the same size, but in different colors of gold, which, black and vivid hues, and sewed each one to a band of narrow black ribbon. I allowed sufficient ribbon at each end to tie around wrist and finish with a neat bow. Chokers are made in a similar manner, except longer lengths of ribbon and more buttons are required.

For the hatpin I used a corsage pin (removed old head) and for the head a pretty red and gold, round button, which was cemented securely. A long needle was used for the stickpin, with a pretty button cemented to head. The hatpin and stickpin can be used for corsages, or scarfs or many other ways… For the corsage, shown in Photograph 2, I selected “lacy” buttons in white and pretty pinks to form the flowers in the corsage. Wiring each button separately with fine florist wire, then I wrapped each wire with green floratape, thus forming the stems. I then arranged the flowers with largest ones at top, and at central point wired the stems together for security. At this point a bow of soft green ribbon was tied.

Button corsages are suitable for year-around gifts, and color combinations may be varied to suit any costume–their possibilities are unlimited. They are very definitely adapted for mailing, since they are so light weight and will not crush… My button gardens are perhaps the most pleasing gifts I make. They please invalids, either children or adults, and are little or no trouble to take care of.

Shown in Photograph 3 is a summer garden made with living plants, which include mosses, succulents, and most any other small plants. If watered daily with only a few drops, these plants will last weeks.

I use large coat buttons, which I first coated with glue to hold the wee plants, tiny rocks, etc. Then I put as much soil as possible around the living plants.

It’s hard to imagine a garden so small it can be landscaped on a button, but once you try it, you’ll soon see the possibilities of all kinds of gardens from mountain landscapes to seashore scenes…

So there you have it! All sorts of ideas to “work up your own nice little business by making button novelties”! Be sure to let me know how that goes for you! 😉