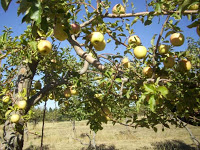 For our second day-trip of the week, on Saturday we headed to the Green Bluff area to pick apples and enjoy other harvest-y type activities. It was a gorgeous day… which made it nice to be out-and-about… 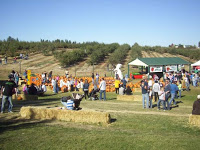 ….but then everybody else and his Uncle Joe thought so, too. All the farms were pretty crowded.

We visited several farms in a row. It was interesting to see how each one was different.

At the first farm we bought Kettle Corn to munch on throughout the day. That stuff is addicting!

Some of our group rode the little shuttle wagon out to the orchards just for fun, though we didn’t actually pick apples there.

Those of us who didn’t go to the orchard had fun snapping pictures with the silly photo props.

Another farm had farm animals to pet… and a little pioneer cabin and teepee to go in. We shuddered thinking of spending the winter in such a structure. 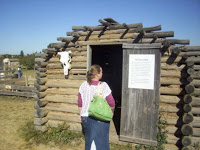 Then we stopped at the orchard where we like to pick apples. They have a nice variety of fruit… and a fun letter-boxing type game for the kids to find all the boxes as they go through the orchard. A nice surprise this year was that apples were only 25 cents a pound! The prices we had seen so far had been $1.00 or more, even for U-Pick so we wondered what the catch was. The lady explained that they had missed a spraying this year, and many of the apples were wormy. We were able to be selective as we picked, and there were still a good many that weren’t wormy, so it turned out to be a good bargain for us!

Moving on, we bought Honey Crisp apples at another farm (a variety that the U-Pick farm didn’t have)… and the girls went out to the pumpkin field to pick pumpkins. They told me they wanted big ones. “Okay, but not too big,” I agreed.

The pumpkins they came back with were bigger than I had in mind, but I have to admit, they do look very nice in the front flowerbed… and the little neighbor boy was very impressed! I guess that’s the whole idea of pumpkins in your yard… to impress the neighbors?

We had lunch and bought fresh apple cider at yet another farm. At that point, we decided we all had what we had come for, so we decided to call it a day.

We’ve been enjoying fresh apples all week… and Laura has been busy making and canning apple butter and applesauce.