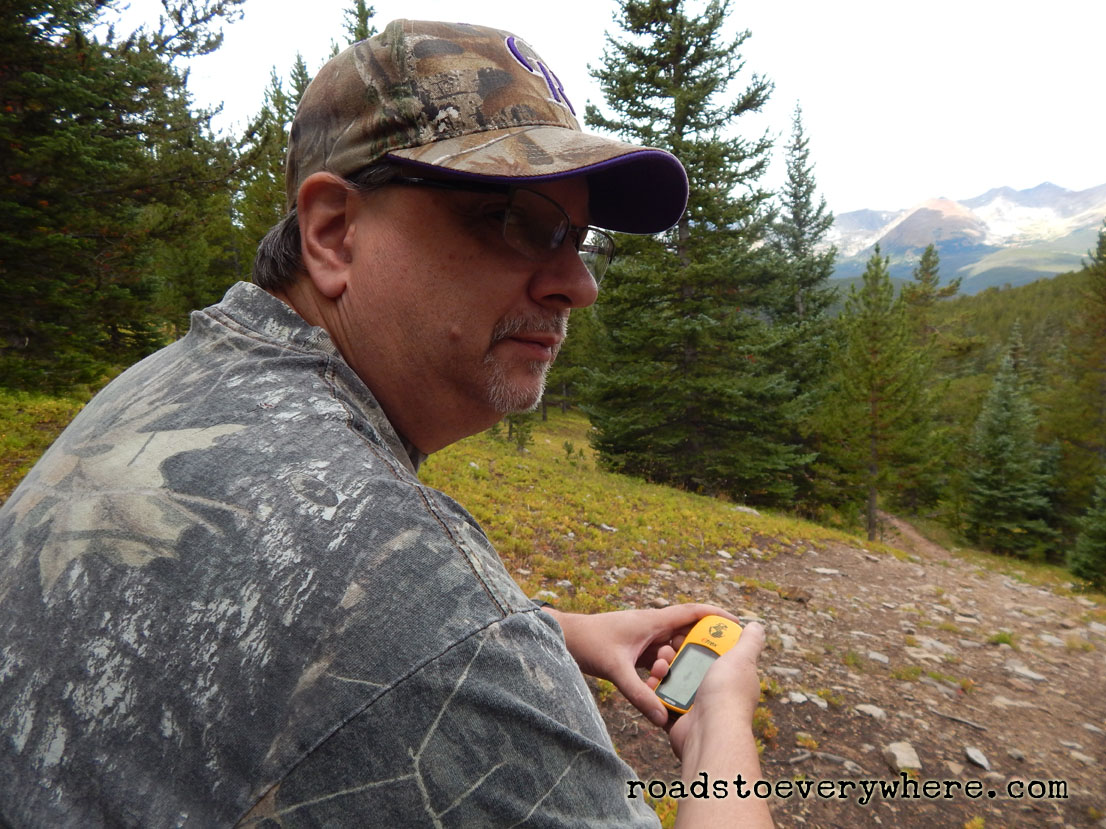 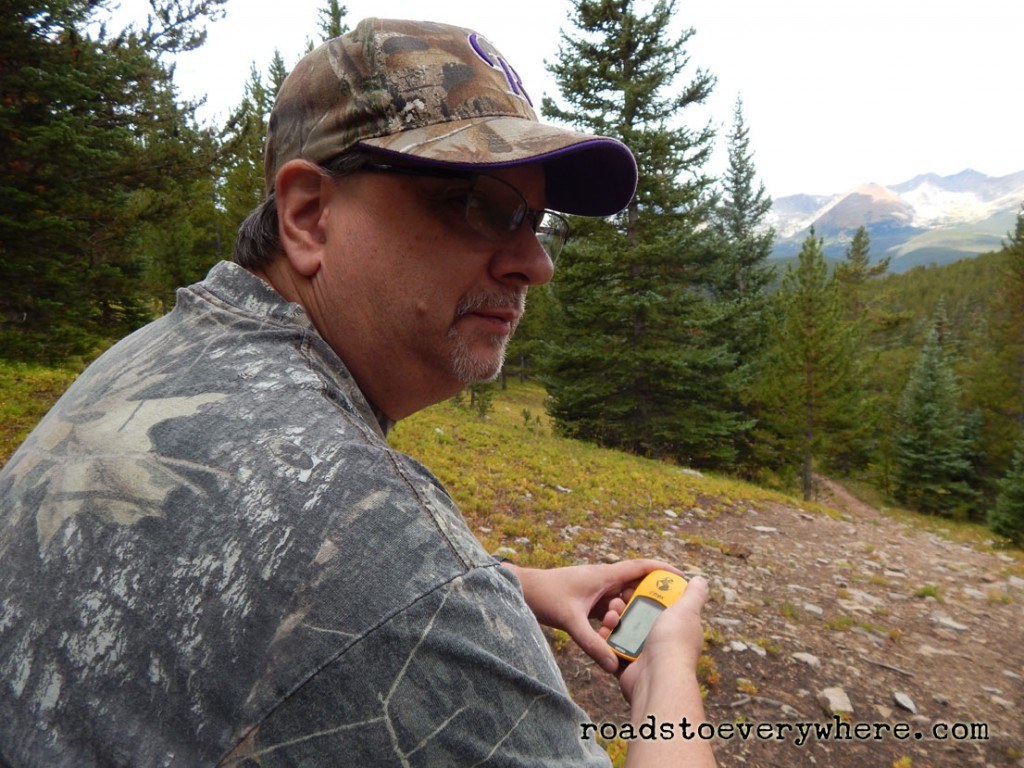 Our geocaching trip this past Monday took us over Boreas Pass near where we went camping last month. Lyle noticed that there were a lot of geocaches in the area while we were camping, but we didn’t have a strong enough cell phone signal to download the coordinates at the time. We decided it would be a fun family activity to do on Labor Day.

Lyle made a list of 17 geocaches for us to try to find that day, knowing that some would be easier than others. 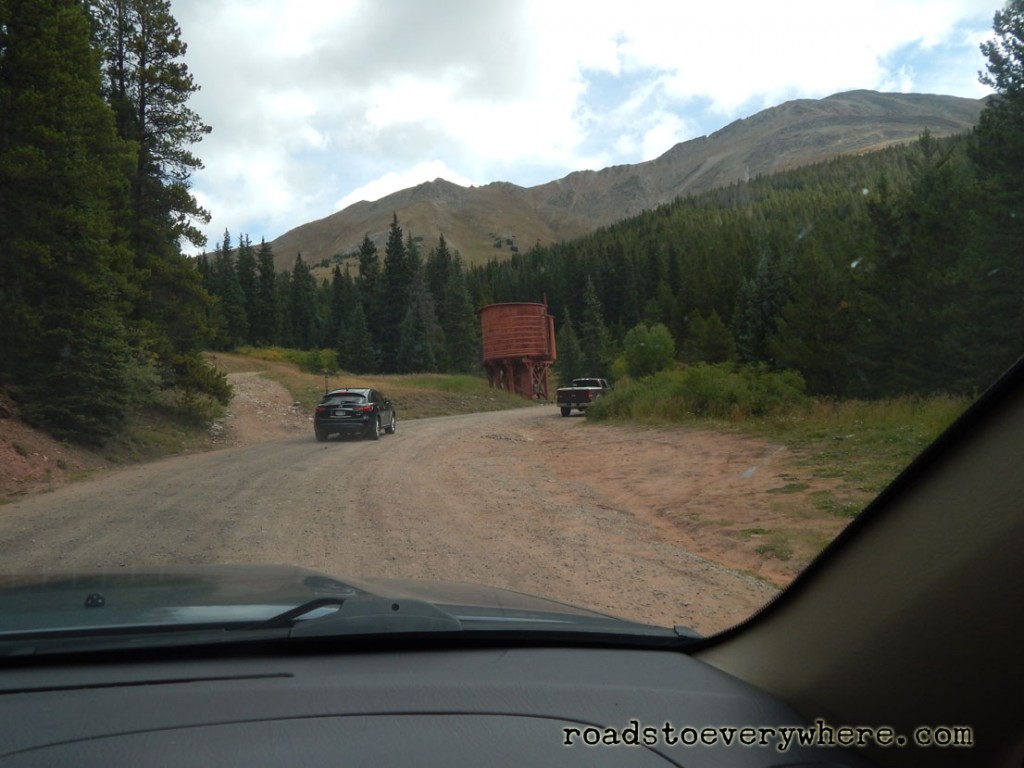 Right along in through here, the GPS pointed straight to the left, so we took the little side road behind the old rusted-out water tank. 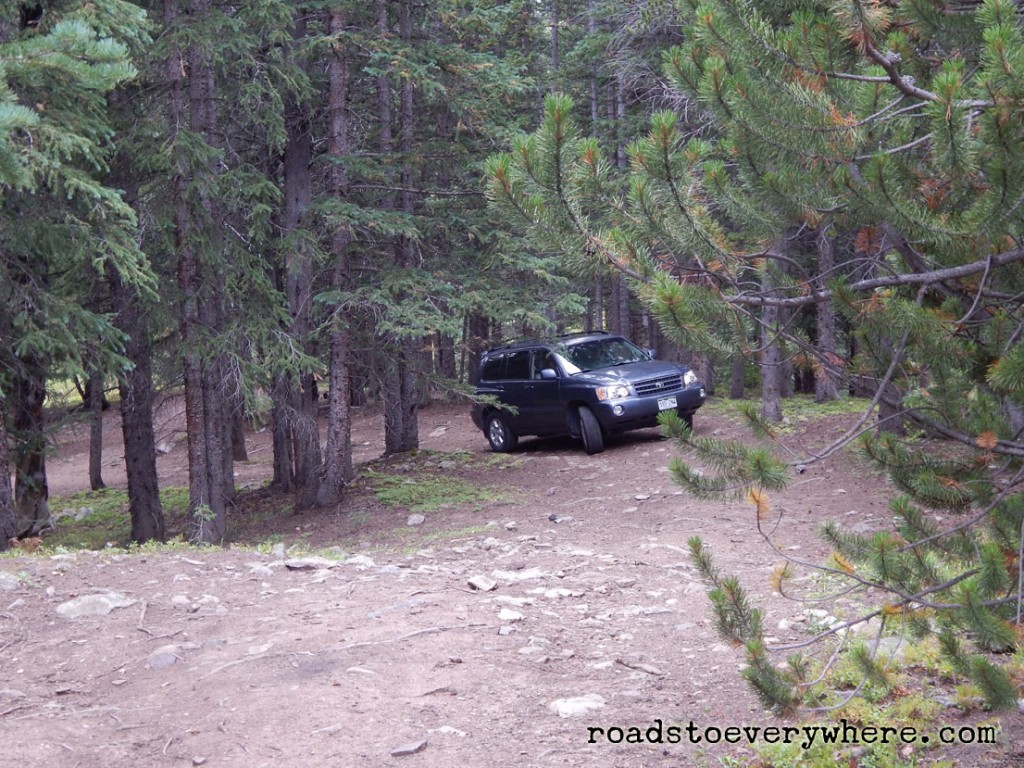 It involved a little “off-roading” which Lyle thoroughly enjoyed. He said it just wasn’t long enough. And not all that extreme since the Highlander is not exactly a high-clearance vehicle. 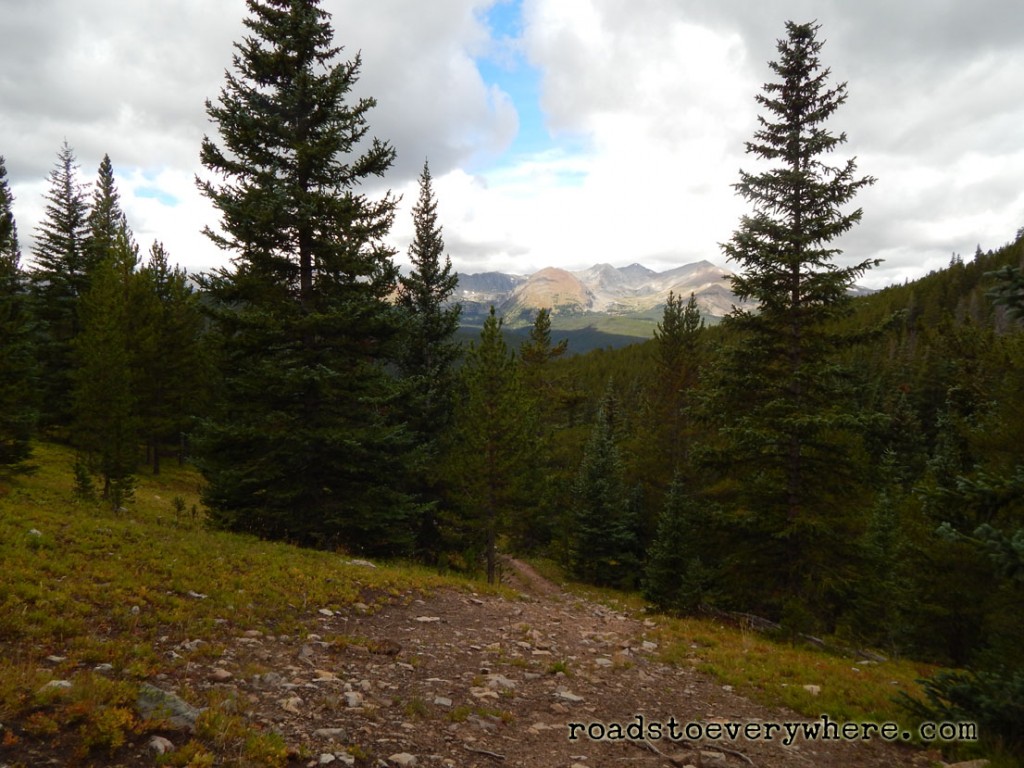 And then, there was a quarter-mile up-hill hike, which was about all I could manage. The altitude where we were was over 11,000 feet. We’ll blame my huffing-and-puffing on that, shall we? That’s my story and I’m sticking to it. The view was spectacular. 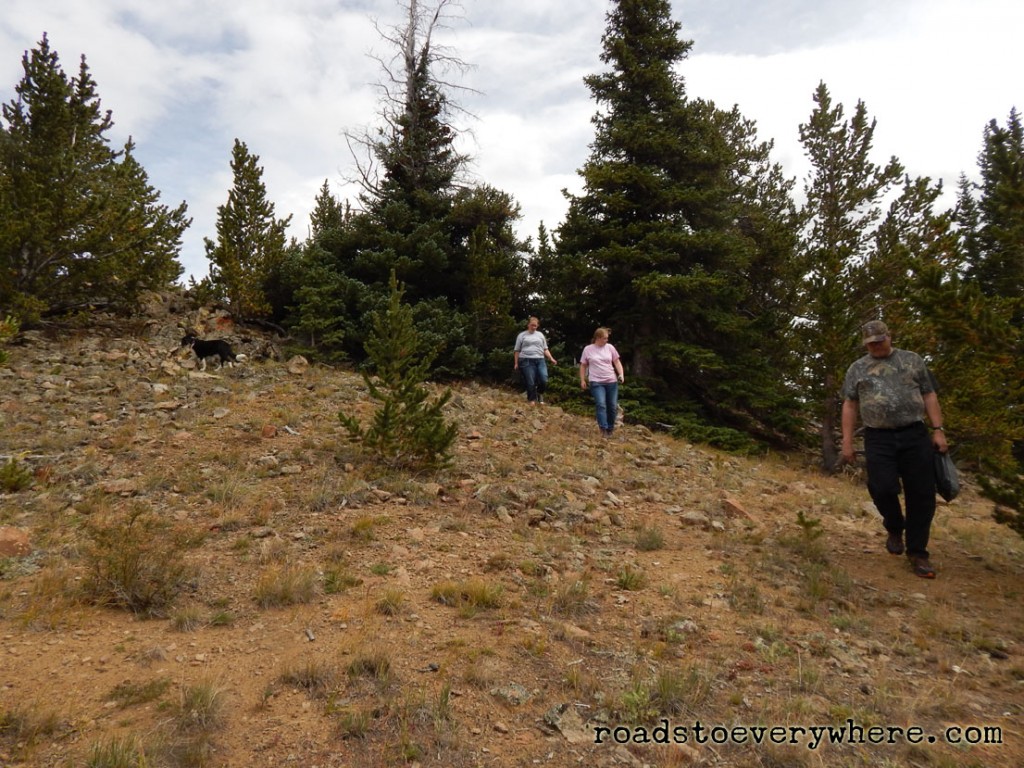 The next cache wasn’t quite so long of a hike, but I still just went part way and let the others find it and bring it to me.

The most challenging one involved a three-quarter-mile hike up to an old log cabin. It sounded really cool, but I knew I wasn’t up for it, so I sat in the car while the rest of the family went. They got rained on a little bit coming back.

After that one, we all decided we had had enough hiking, so we skipped 5 of the caches that involved a hike. We found a total of 12. Actually 11. On one we found where the cache had been, but it was missing. We’ll have to log that one as a “did not find” so the cache owner can replace it.

For the record, here is the list of caches we found on Monday, September 7, 2015:

The kids were a little disappointed with the contents of most of the caches. Several of them were micro-caches (in a film canister or pill bottle) so there was no room for trade items. The larger ones hadn’t been maintained so there was not much of interest in them. That was okay, though, as the girls have pretty much out-grown the need to trade items in every cache.

It had been awhile since we went out geocaching. We were trying to figure out how long we had been doing it. I found the picture of our very first find at Mullan Tree in Idaho in June 2002. 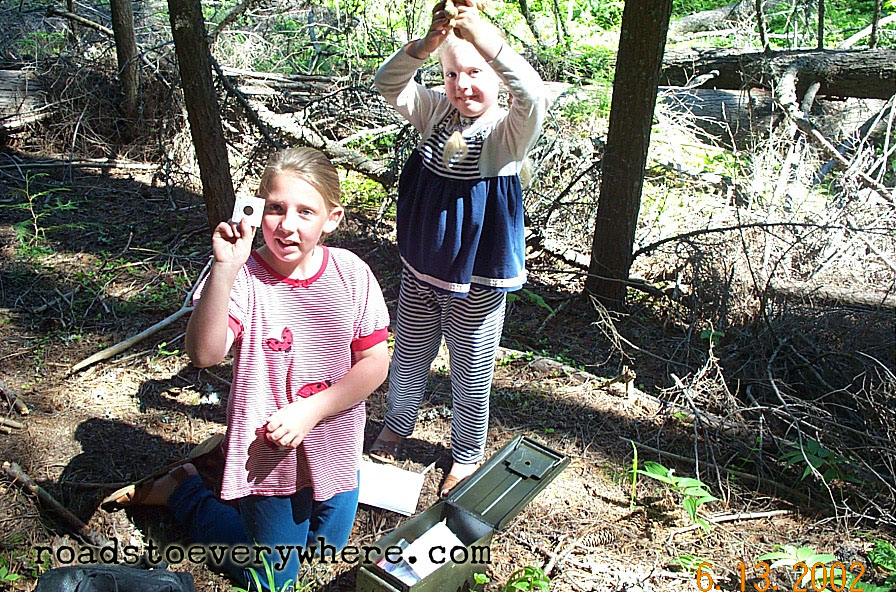 We’ve been doing this as a family hobby for over 13 years! The kids were so little. Laura was 9 and Rebecca was 6. 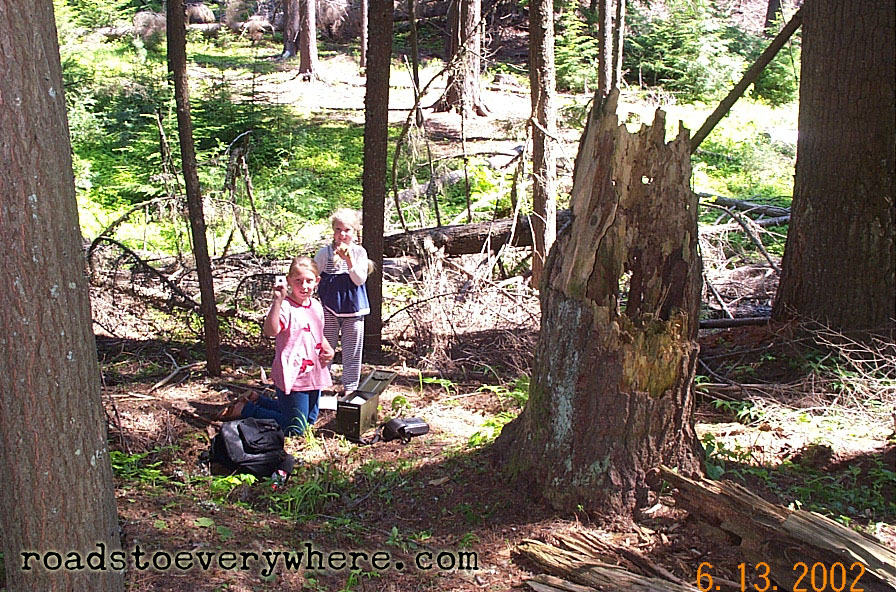 The cool thing is that they still enjoy it and like to do things with us as a family, at ages 19 and 22.

That’s a blessing I don’t take for granted.

Have you ever been geocaching?