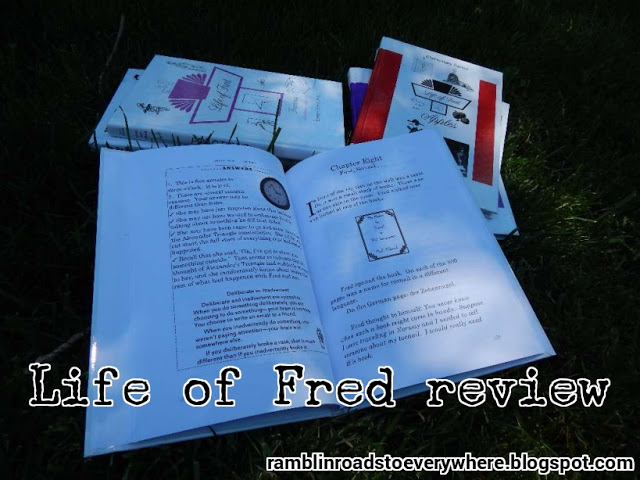 Life of Fred is a series of math books that Sonlight has recently begun to carry. I used several books in this series with Rebecca for her last couple of years of school. We thought they were great, so I wanted to share how we used them.

First, you need to understand that Rebecca learns differently than the average student. She requires a lot of repetition and review, and it seems to work best to present material in a variety of ways. She can get bogged down in one area while moving ahead quickly in another area. My approach was to encourage her to move on ahead where she could, while finding another way to present the material in the area where she seemed to be stuck. She understands concrete concepts but struggles with more abstract ideas.

With that in mind, we actually started with two different levels of Fred books. We got the first book in the elementary series, Life of Fred: Apples. This was basic (first grade level) math, so very easy for her to work through on her own. But it’s not your average first grade level math book. It includes a silly story line, which made it fun, as well as extra, random, more advanced facts from all subject areas. The author works in things like that because it’s a natural learning approach. This made it seem not too babyish, even though it was very basic math.

Having already done several years of other math programs, Rebecca was ready to learn about fractions, but I knew it would be a hard concept for her to understand and work through. I got the Life of Fred: Fractions book for me to work through with her at the same time she was doing Apples on her own. Each day I would read a chapter from the Fractions book, and then work through the problems one-by-one with her sitting beside me following along. She had memorized the multiplication tables (using the Flashmaster device) so she was able to work the basic math steps as we came to them, though I knew she wouldn’t remember how to tackle the more complex problems on her own. She continued working through the elementary level books on her own, while we went through the Fractions and Decimals and Percents books more slowly. This helped reinforce concepts she had already been introduced to, while giving her a glimpse of ways math is used in real life.

Rebecca loved the silly stories about little Fred, the 5-year-old university math professor. We couldn’t help but grin at the outlandish predicaments he gets into as he goes about his daily life. He’s a serious and naive little fella who sleeps under his desk in a tiny sleeping bag with his happy-meal toy doll, Kingie.

What I like about the books is the natural learning approach tied into the story. Almost anything is easier to remember with a story tied to it, and in the stories Fred is eager to learn about the world around him. Not in a stilted, unnatural way like you might think a textbook would be. But normal curiosity about the random things of everyday life. That’s why you’ll learn interesting things like who Archimedes was, the invention of photography, why whales aren’t fish, and the difference between herbivores and carnivores alongside basic math facts like 5 + 2 = 7 and 10 + 10 = 20 in the Apples book.

When you read through the list of titles for the elementary level books… Apples, Butterflies, Cats, Dogs, Edgewood, Farming, Goldfish, Honey, Ice Cream, and Jelly Beans… you do have to wonder what in the world those things have to do with math. First, notice that they are in alphabetical order. That helps you remember what order the books go in. And yes, it’s important to start at the beginning and go through the books in order because the story flows from one book to the next, and the concepts build on things learned in previous levels. I promise, Apples is not babyish. And then, those seemingly random words really do have something to do with the story in that particular book.

I don’t know that I would recommend Life of Fred as a stand-alone math program for an average student, but honestly, it’s going to depend on your student. I think it makes a great supplement, and is especially great for a special needs situation such as we had.