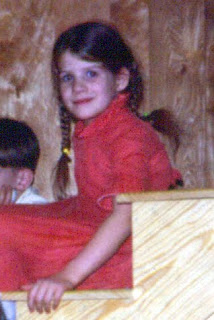 When I was growing up we stayed home for Christmas most years… and usually it was just our family– my parents and their five children. A few weeks before Christmas Dad would inevitably tell us, “Well, kids… I’m sorry… but it looks like it’s going to be a pretty small Christmas this year.” So we would brace ourselves and mentally try prepare for the worst. Come Christmas morning we were always amazed– every year there were way more gifts than we had expected! I think Dad was probably amazed himself. We never had a lot but it was always enough! And we were grateful.

One year, though, we got to visit both sets of grandparents at Christmas time. I remember the trip and the family time much clearer than I remember the gifts we received. It was 1971 and I was six. We lived in Tennessee that year, and we traveled to Arkansas to be with Mother’s family and then on to Louisiana to be with Dad’s family.

The whole family was at Grandmother and Granddaddy’s house in Arkansas… all the aunts and uncles and cousins. The family was a good bit smaller then than it is now, but it was still a house full! With so many people, the pile of gifts under the tree looked enormous… and all the little children were so excited! 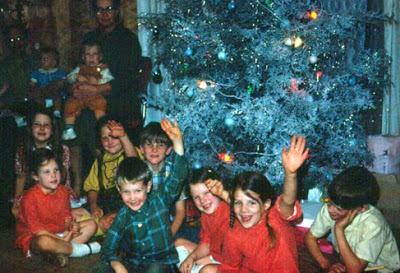 Gift opening time finally arrived… but first Granddaddy read the Christmas Story from the Bible. We squirmed in anticipation as we tried to give our attention to the familiar story of the Baby born in the stable and the shepherds who came to worship. When Granddaddy finished the reading a knock came at the door.

It was Santa Claus with a sack of presents! Santa Claus reminded me an awful lot of Uncle Keith and as I look around I realized that Uncle Keith was suspiciously missing! Others of the “big kids” (the 6- to 8-year-olds) had the same idea. We were just pretty sure that it was actually Uncle Keith in the Santa suit and not some unknown stranger. 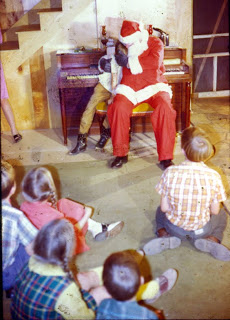 The little kids weren’t convinced and wouldn’t go near him at first. They eventually warmed up to him as he made himself at home and proved himself friendly! Soon he was hunkered down under the Christmas tree passing out gifts.

What a Merry Christmas that was!

I remember some of the gifts exchanged included things like books, games, jigsaw puzzles, socks, handkerchiefs — things like you’d find at the dollar store these days — or hand-made items like potholders, aprons, doll clothes, or decoupaged plaques.

Christmas seems so much more commercialized these days. I realize that my adult eyes don’t see the world through the innocent filter of childhood any longer… but I also know that the simple gifts we exchanged with family members all those years ago would be shunned by many as not gift-worthy these days. I expect that’s where a lot of the stress of the season comes from… trying to live up to expectations of what an acceptable gift would be. 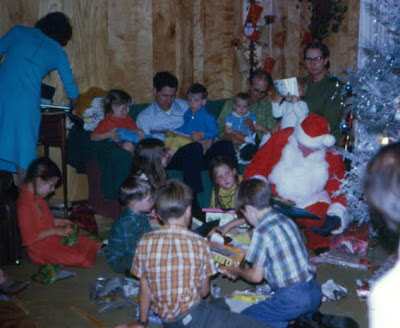 Of course we love to give to our children and other loved ones, but I have found it a little easier to simplify when I think back to that long-ago Christmas and realize that the memories I treasure come from family togetherness and the celebration of the Reason for the Season, not the material gifts.