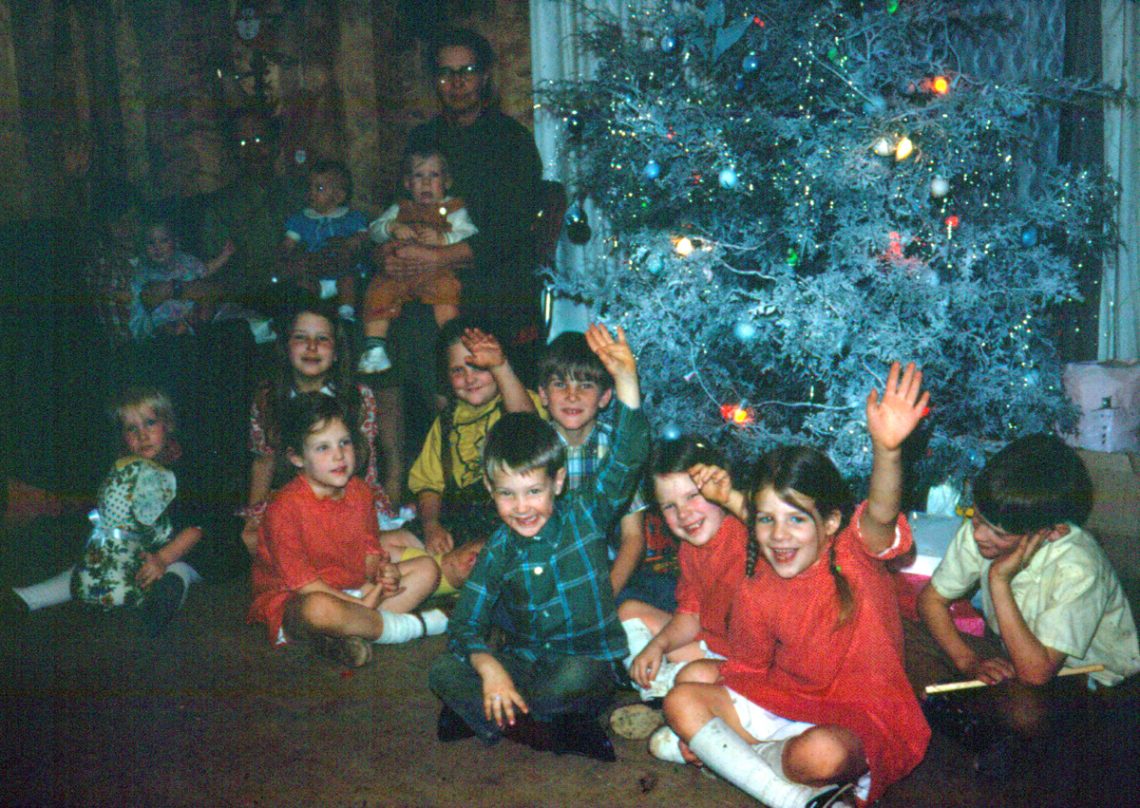 We’ll be celebrating Christmas in Arkansas this year, in the house my grandparents were in the process of building 50 years ago. Christmas that year was one of best ones I remember. I was 6 years old.

The whole family was there… all the aunts and uncles and cousins. At least for a few hours. Only half of my grandparents’ children were married then (5 out of 10), and not quite half of the grandchildren were born (13 out of 27). If my math is correct, there were 31 of us (plus one aunt who would marry into the family the following summer).

I’ve been trying to remember where we all slept that one night that everyone was there. The house has 4 bedrooms and there was a small mobile home on the property with 2 bedrooms. That averages out to 5 people per bedroom!

According to Grandmother’s Christmas letter:

I’d be interested to know which beds were in what rooms and who slept where. I wonder if Esther and Rachel remember. I’m pretty sure we wouldn’t try to cram that many people in that space these days.

The Christmas tree was a cedar tree that had been cut in the woods nearby. Cedar trees have pretty flimsy branches so it took some creativity to decorate it for Christmas. It looks like they sprayed it with that white “snow” spray, then added a couple of strings of those old-timey big bulb Christmas lights, a few glass ornaments, and then draped it with foil “icicles.” We thought it was beautiful.

With so many people, the pile of gifts under the tree looked enormous… and all the little children were so excited! We were told that we couldn’t open gifts until Aunt Linda and Uncle Cecil and Julia Kay got there. They lived in Oklahoma City (3 or 4 hours away) and couldn’t come until Uncle Cecil got off work that day.

The time was getting close (we thought) so we would go out in the yard to watch for Aunt Linda and Uncle Cecil. One of the kids got the names mixed up. We thought it was just hilarious to think that we were waiting for Aunt Cecil and Uncle Linda!

Finally, finally, they arrived and we eagerly gathered in the living room. Before the gifts could be opened Granddaddy read the Christmas Story from the Bible. And then, a knock came at the door. It was Santa Claus with a sack of presents!

Santa Claus reminded me an awful lot of Uncle Keith and as I looked around I realized that Uncle Keith was suspiciously missing! Others of the “big kids” (the 6-to-8-year-olds) had the same idea. We were just pretty sure that it was actually our uncle in the Santa suit and not some unknown stranger. (We hadn’t been taught to “believe in” Santa, so we knew it was just pretend. Still, it was a little unnerving to have a jolly old guy in a red suit and long white beard show up in the living room!) The little kids weren’t convinced it was Uncle Keith and wouldn’t go near him!

I don’t know how long it took for the all the gifts to be opened, but I remember it was kind of a free-for-all. The tradition in my immediate family is to take turns opening gifts, but we didn’t that time, so I’m sure it was over in just a few minutes.

After the clutter was cleared away it was time to pose for pictures. Let’s have all the grandchildren sit on the stairs behind the grandparents…

It was apparently like herding cats. I’m not sure everyone was quite ready, but this is what we ended up with. (Also, one of my sisters is missing from these 2 pictures. I don’t know why.)

And then a picture of my grandparents with their 10 children… who, it seems, could pose a little better than the wiggly little kids. (Their ages ranged from 7 to 34 that Christmas. Grandmother was 54, and Granddaddy 56. That boggles my mind.)

I have no idea what was in a single package I opened, nor what we ate. I remember playing with my cousins and young aunt Rachel all day long, no doubt getting underfoot with whatever the adults were trying to do. We eagerly carried in firewood for the fireplace that was the only source of heat, competing to see who could carry the most logs at a time. Mostly I remember the excitement and joy of the whole family being together.

That feeling of contentment and joy with an eternal perspective is how I want to celebrate Christmas every year!