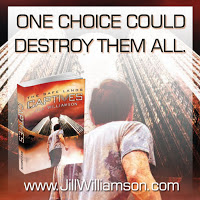 If you’ve been following my blog for very long you will know I read a wide variety of fiction genres. Some I enjoy more than others, but primarily I just enjoy a well-told story, regardless of the category. Dystopian* stories seem to be particularly popular with young adults readers lately. My main criteria for a dystopian novel, besides being well-written, is that include an element of hope. (Which is why I didn’t like Brave New World or 1984, but I did like Alas, Babylon.)

Jill Williamson‘s new series, The Safe Lands, fits the bill. Set 80 years in the future, the story not only includes an element of hope, it also includes a strong element of faith. The young people in the story are captured from an outlying village (where they have been living simply all their lives) and are taken to a very high-tech city and expected to immediately start reproducing to repopulate the city.

I was intrigued by the plot and interested to see how each of the characters dealt with their new environment. I think this may be my favorite of Jill’s books so far. You can read the prologue and first chapter here.

Here is the back cover copy:

When eighteen-year-old Levi returned from Denver City with his latest scavenged finds, he never imagined he’d find his village of Glenrock decimated, loved ones killed, and many—including his fiancée, Jem—taken captive. Now alone, Levi is determined to rescue what remains of his people, even if it means entering the Safe Lands, a walled city that seems anything but safe.
Omar knows he betrayed his brother by sending him away, but helping the enforcers was necessary. Living off the land and clinging to an outdated religion holds his village back. The Safe Lands has protected people since the plague decimated the world generations ago … and its rulers have promised power and wealth beyond Omar’s dreams.
Meanwhile, their brother Mason has been granted a position inside the Safe Lands, and may be able to use his captivity to save not only the people of his village, but also possibly find a cure for the virus that threatens everyone within the Safe Lands’ walls.
Will Mason uncover the truth hidden behind the Safe Lands’ façade before it’s too late?

* Definition from Wikipedia: “A dystopia is a community or society, usually fictional, that is in some important way undesirable or frightening. It is the opposite of a utopia.”