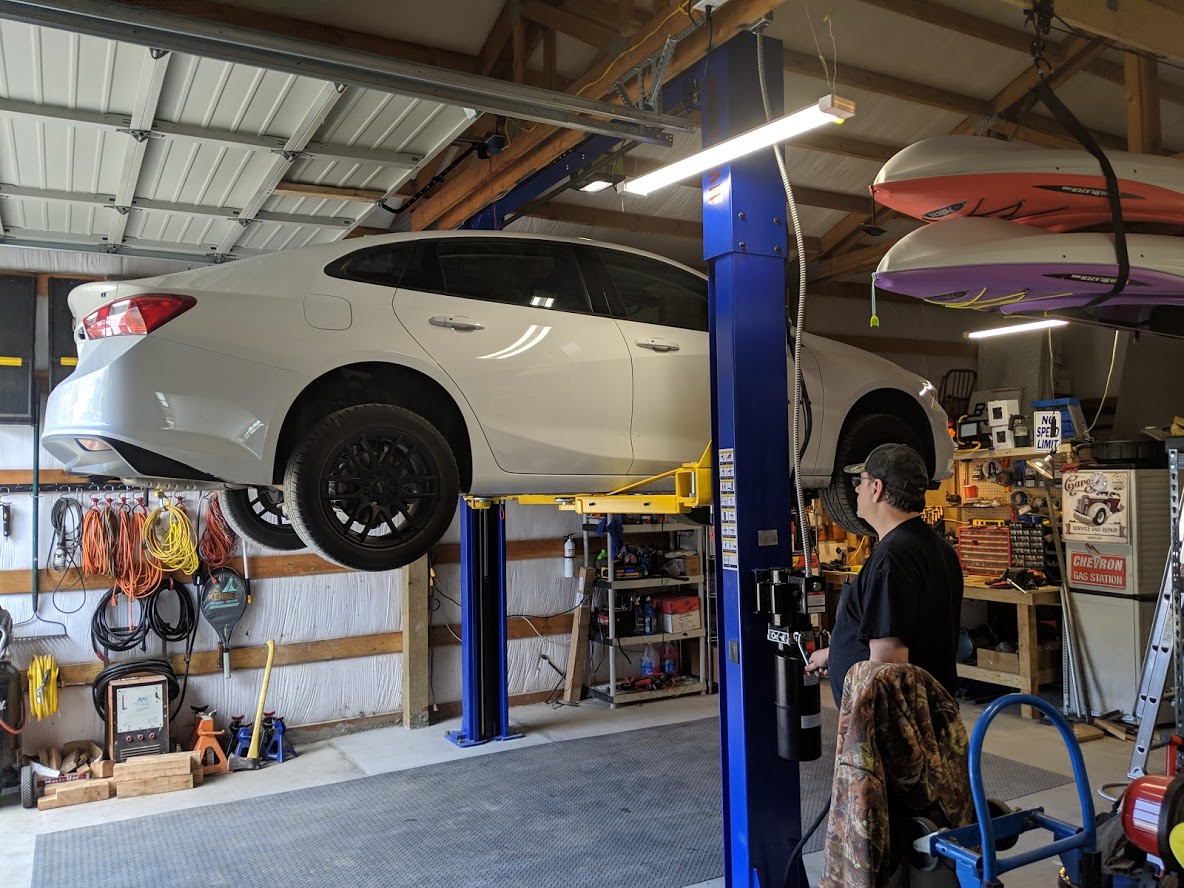 Ever since he was a teenager Lyle has been a “shade tree mechanic” on the side, performing maintenance on our cars and doing occasional repairs for friends and family. Now that he has adult daughters and nieces with their own cars he has been spending even more time in the garage. (Not really under a shade tree.) His brother Loren has been helping him a lot.

Last fall they decided to install a car lift in the garage to make it easier for them to get under the vehicles. Lyle claims to suffer from “oldage”– pronounced as one word: old’udge–and looks for ways to “work smarter, not harder.”

It might not have occurred to you, because I had never thought of it myself, but installing something capable of hoisting full-size vehicles over one’s head is not a project to be undertaken lightly.

After much research the guys decided on a particular lift available in Seattle. We took our flatbed trailer over one weekend in March to pick it up.

The next step was to prepare the garage floor for installation. Turns out the concrete wasn’t thick enough for something so heavy duty. The guys cut out four-foot squares of the floor and dug down several inches into the ground below the floor.

Later they refilled the holes with concrete and left it to cure for about a month.

Finally the day came, last Saturday, for the installation of the lift itself. I’m not even sure how to describe the following pictures so I’ll just let them speak for themselves.

After hours of work and a few times up and down empty, it was time to try it out with our car.

I was holding my breath and giving it the side-eye while Lyle confidently positioned it into place and pushed the lever.

Look at that! It works!

Later Loren brought over one of his vans to be hoisted and worked on. I think they ended up reassembling it unrepaired while they wait on parts.

The next evening, Lyle tried it out with our Sequoia. It looks massive floating up in the air like that.

I’m not brave enough to walk under it. I try not to think about the men working up under the vehicles. I just trust that they know what they’re doing and that the Lord has angels watching out for them.

These two guys never cease to amaze me with their ingenuity and ability to figure out how to do things.