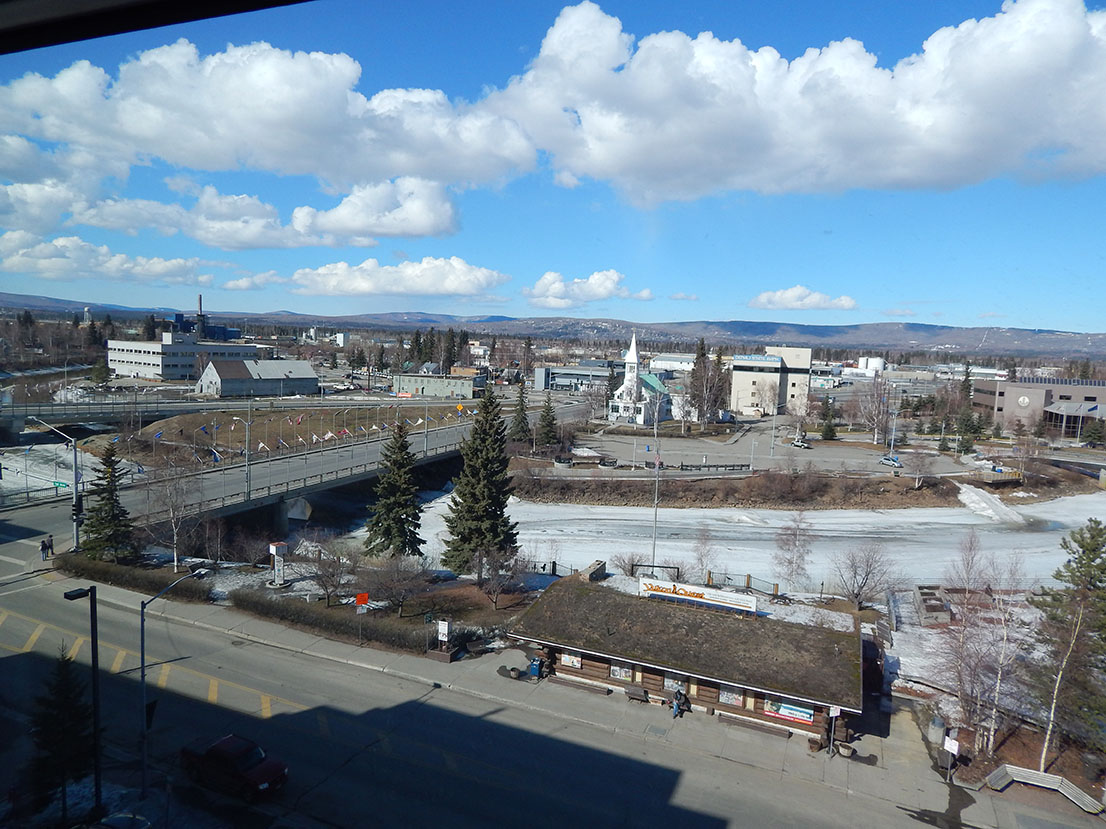 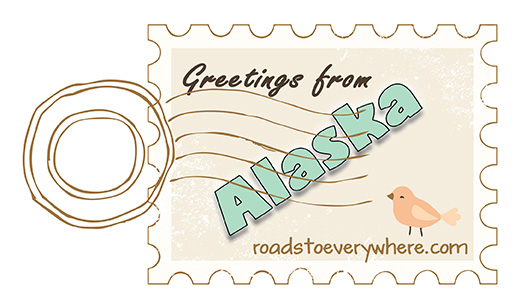 Day 29 of our virtual road trip takes us northwest from Washington to Alaska. (Good thing we’re not on an actual road trip, because it would definitely take us more than one day to get there.) I’ve been to Alaska twice for work. I would love to go back sometime for vacation, and it would be even more fun if we could actually drive the Alaska Highway through Canada to get there.

I’ll share some previous blog posts about my trips to Alaska, but before I do I’ve decided to tell about the funniest thing that happened to me there. I’ve told it orally a number of times, but haven’t had the courage to write it until now, because it’s kinda embarrassing. Still, it’s too good not to tell it on myself.

A co-worker and I flew from Anchorage to Fairbanks and rented a car. Neither of us had been there before so we had no clue what to expect. We had reservations at a nicer hotel in downtown Fairbanks. We found the place okay, unloaded our luggage and went into the lobby. She checked in first, and while I was waiting my turn an older man came up and asked what my name was. He appeared to be a native Alaskan and I guess my initial impression was that he was just a friendly ol’ grandpa.

“Karla!” he said, looking me up and down. All 5′ 11″ heavier-than-I-want-to-be, in my frumpy, middle-aged mama traveling clothes.

Just as sincerely as anything he said, “You are the most beautiful woman in the state of Alaska!”

I snorted. Yes, right out loud. “Yeah, right!” I said, thinking that Alaska must not have very many women. Which it probably doesn’t, but still.

“Have you ever been to California?” he wanted to know.

“Yes, I have,” I told him, certain that he couldn’t possibly think I was the most beautiful woman in the state of California.

“Did you wear a bikini there?” he eagerly asked.

At which point it occurred to me: this ol’ guy is hitting on me… and I kinda suspect he’s been in the tipsy sauce!

I immediately decided that the conversation was over and kinda turned my back to him.

He persisted with other questions about my husband (he knew I was married!!) and my parents and I don’t know what all. I was doing my best to ignore him.

The clerk at the counter had finished with my friend and noticed what was going on. “Mr. [Whatever-his-name-was], you can’t be harassing the other guests like that! Anyway, your ride is here.”

So the ol’ geezer trundled off to get in the taxi. I was just appalled, but my friend was dying laughing.

I got checked in and then my friend and I headed for the elevators, snickering the whole way. We pushed the elevator button and nothing happened. We pushed it repeatedly. Still nothing. Pretty soon a guy pushing a cart full of linens came down the hall.

“Oh, you have to swipe your room key card to call the elevator,” he told us.

Neither of us had ever heard of such a thing.

“Yeah,” he said. “With the restaurant and bar on this end of the building, we don’t want people who have had too much to drink to go upstairs unless they are guests.”

My friend and I looked at each other. What kind of situation had we gotten ourselves into?

“Is this place safe?” my friend asked the worker.

The elevator door finally opened and we got in. As we rode up to our rooms, my friend said, “I don’t know why I asked him that. Of course he’s going to say yes!”

It did turn out to be fine, but we have definitely laughed about that many times since. Me: The most beautiful woman in the state of Alaska!

Out and About in Anchorage

Sadly, I didn’t get to see the northern lights on either trip. Apparently it was too late in the year. Maybe some day.

Have you been to Alaska? If so, please share a memory in the comments! That will make this series even more fun!