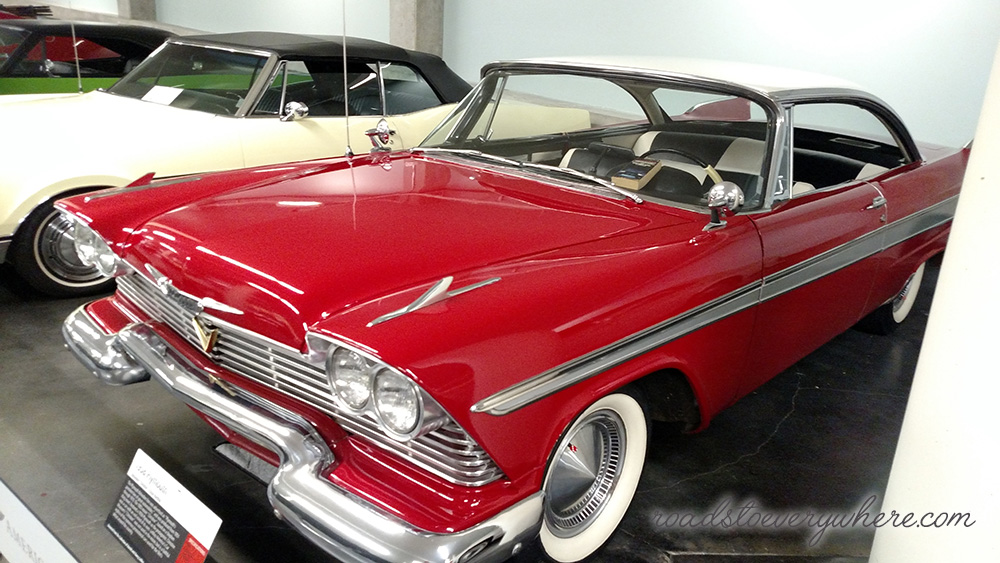 We’ve had several weekend trips to Seattle come up recently as we do business with an envelope company over there. It’s actually cheaper for us to drive back and forth to pick up product rather than having it shipped, and if you know anything about Lyle you know he’s happy for any chance to drive. The drive takes about 5 hours so it would be possible to do a round trip in one day, but we usually don’t. It’s more fun to spend the night and then do something fun the next day.

One weekend we decided to visit “America’s Car Museum” in Tacoma. Lyle had been there before several years ago and thoroughly enjoyed it, but I had never been. Since I’m such a car buff I had just been dying to visit! (Not really. I know you couldn’t see my expression when I said that but my tongue was in my cheek and I kinda rolled my eyes a little bit.)

What I do love is that man of mine and I knew he would enjoy showing me the cars. I also enjoy learning about history and since it was mostly old cars (and other vehicles) it turned out to be more interesting than I expected.

The first exhibit focused on work vehicles from the first half of the 1900s. 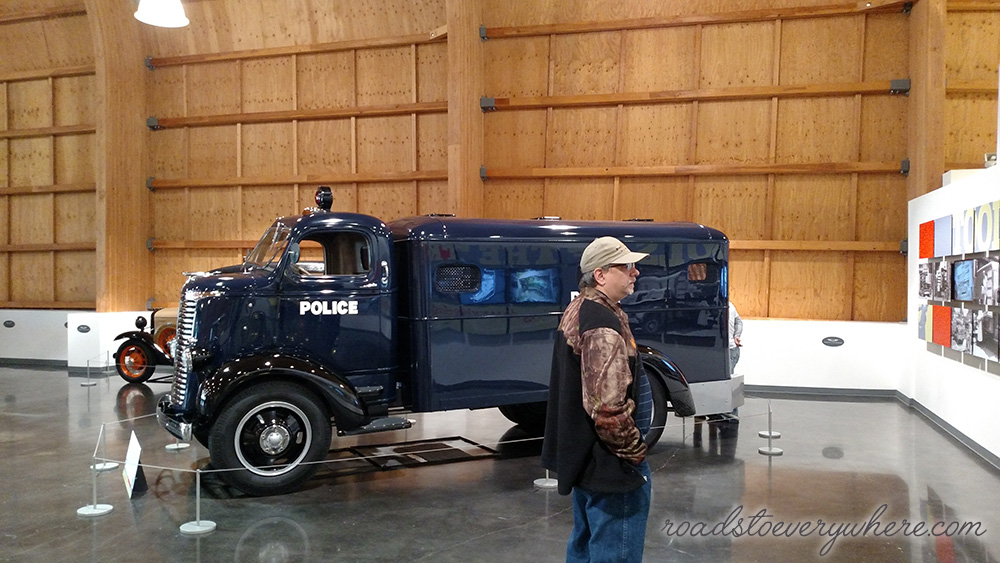 How’d you like to ride in this police paddy wagon? There are hard benches along the sides inside the back and then a metal mesh wall about 2 feet from the back with a shorter bench for the guard to have a place to sit separate from the prisoners. 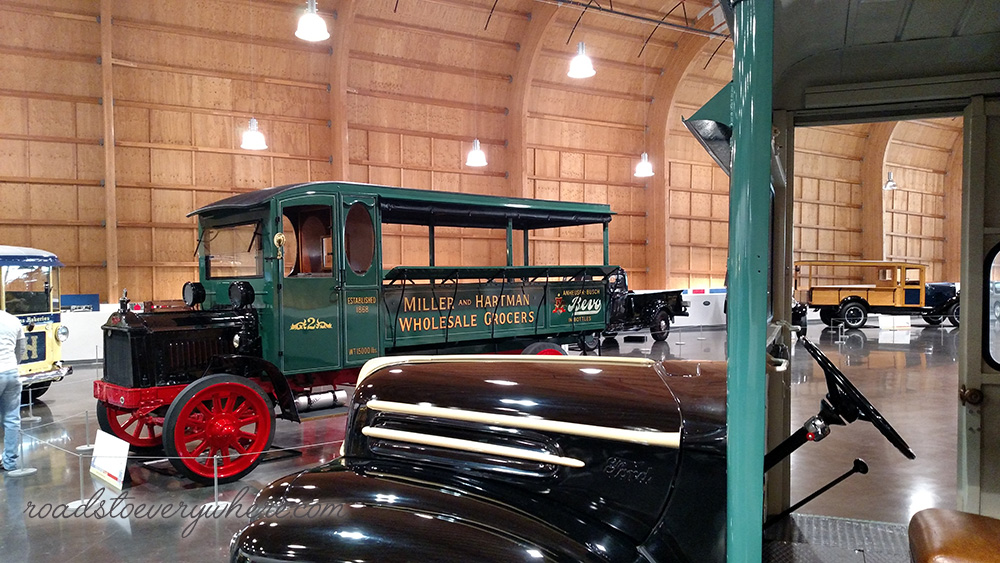 Obviously, this was a wholesale grocers truck. We weren’t sure what purpose the slanted “shelves” served or even why it was open in the back like that. But we did notice the solid rubber tires. I guess that’s one way to avoid a flat, huh? 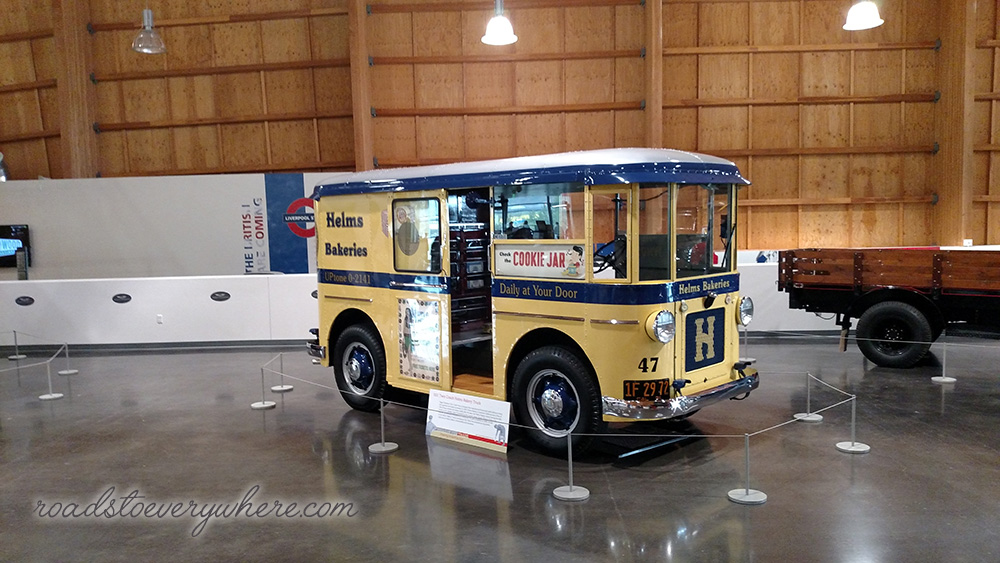 I thought the cookie truck was cute. Apparently it made home deliveries. It had shallow drawers in the back. 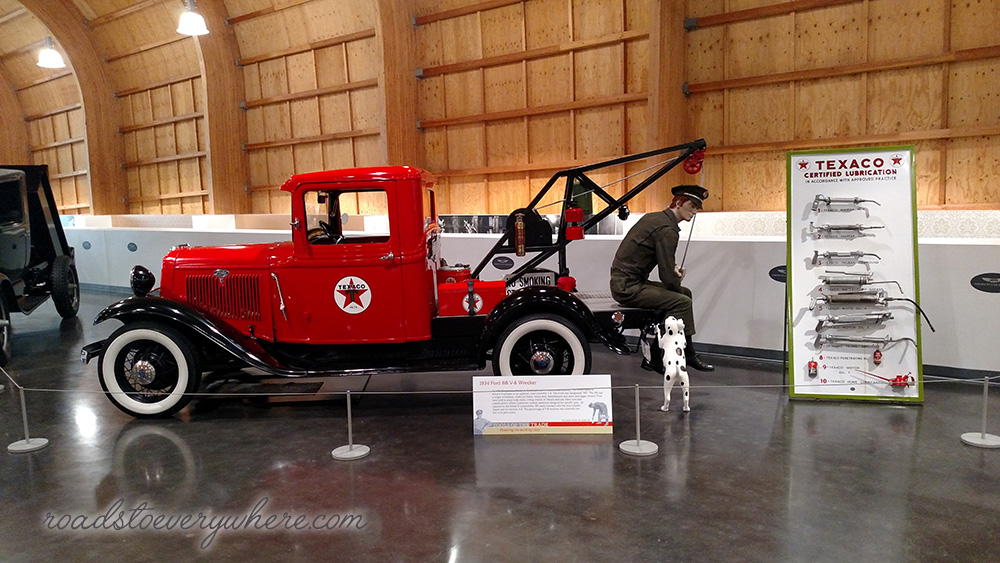 I wondered if this bright red Texaco tow truck was really that shiny when it was new. Maybe it was. It was the only exhibit with a mannequin… and his little Dalmatian. 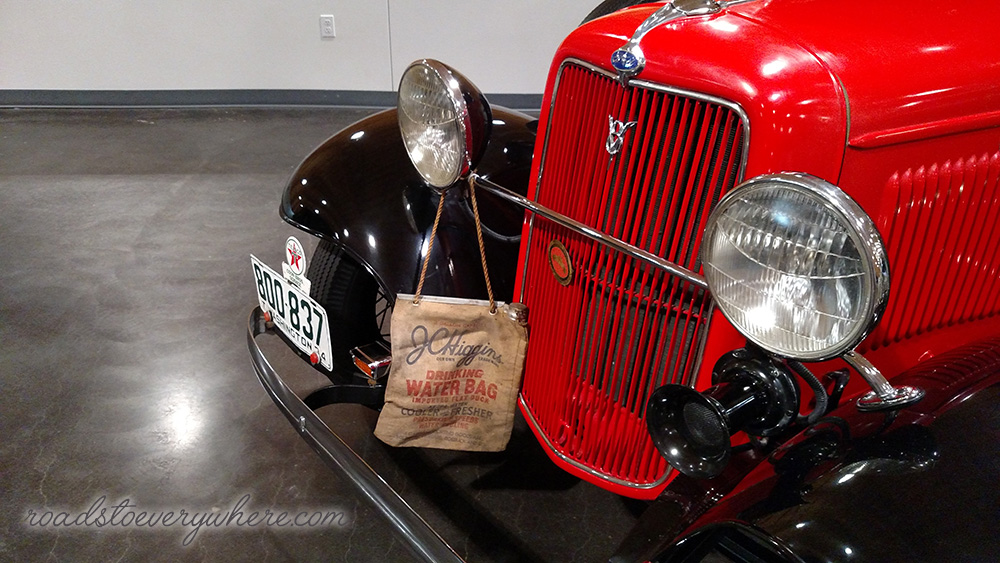 Hanging on the font was a “Drinking Water Bag.” Do you think that’s really where they carried that? And if so, why? So many questions! 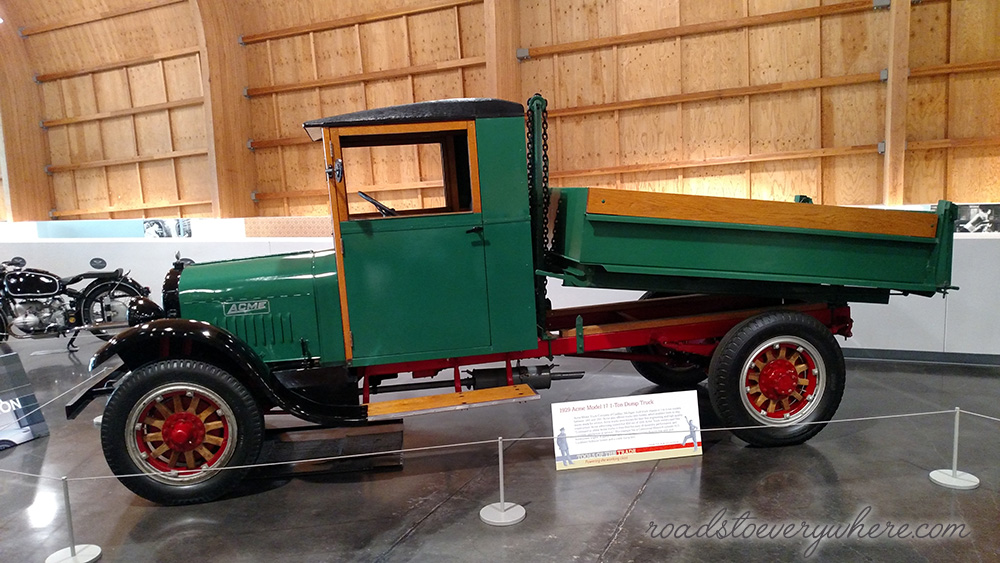 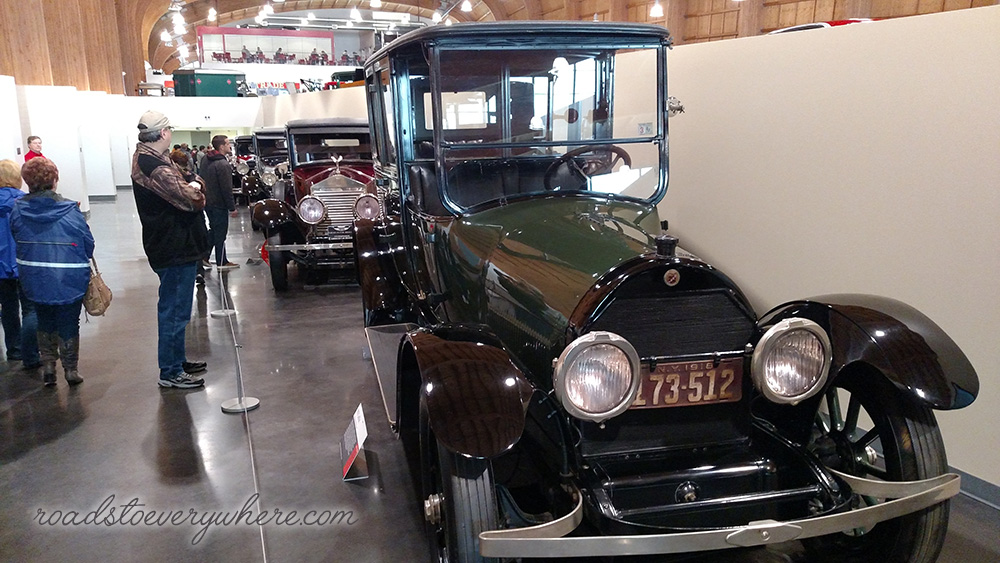 The next exhibit was a row of 1930s custom coach-style cars that belonged to wealthy families.

Understand that this museum houses hundreds of cars… so we’re going to skip ahead a bit. 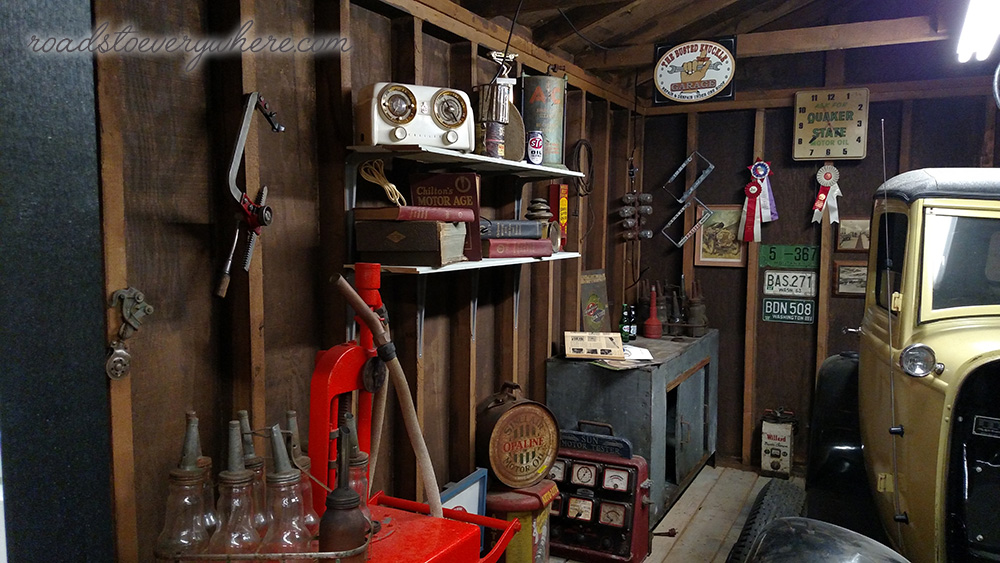 I loved studying all the details in “Lucky’s Garage” like the old car repair manuals and the vintage radio. 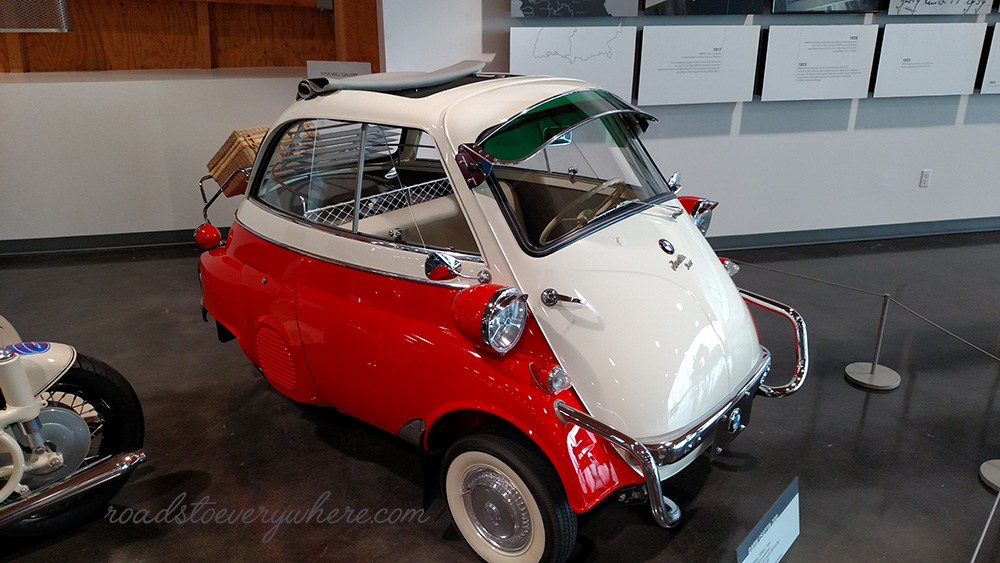 There were also a few random cars. Remember Urkel’s car on Family Matters? It makes me think of a clown car but I guess it was a real car–a BMW Isetta. The museum had two of them! 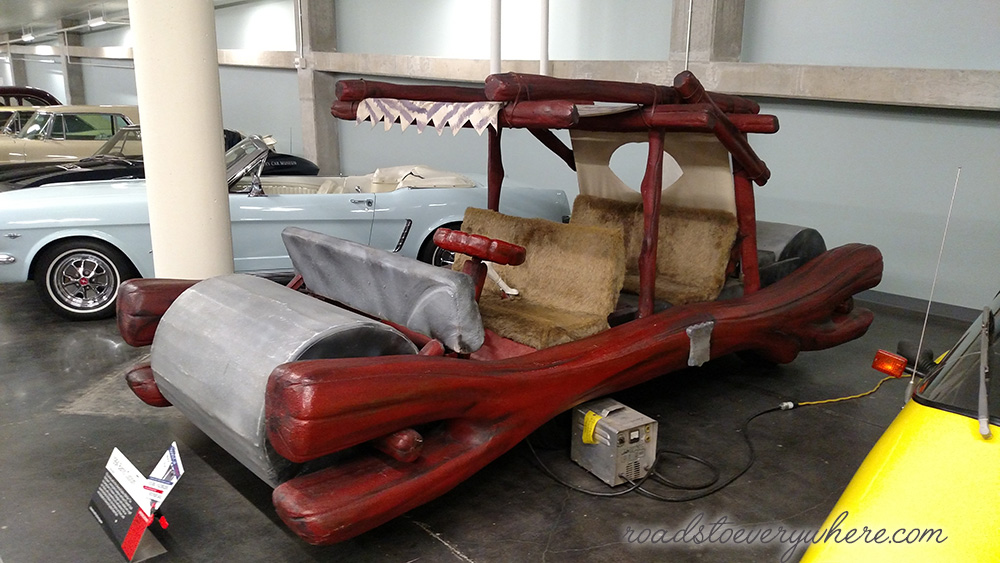 They also had the car from the Flintstones movie. I joked that it was “millions of years old.” A teenage girl standing nearby heard me say that. “Really??” she gasped. I don’t know if she honestly believed me or was just playing along. 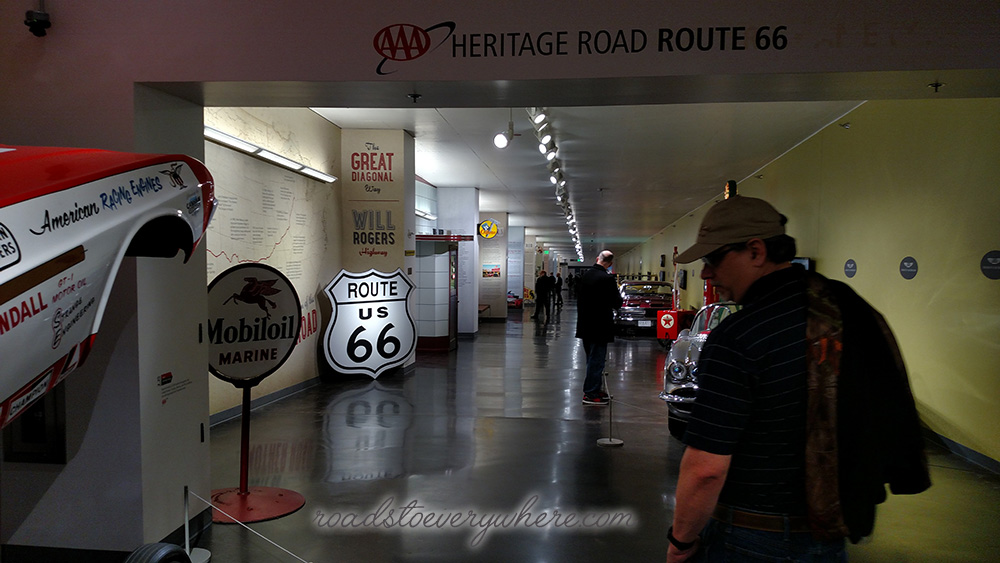 I especially enjoyed the Route 66 exhibit…

…and loved how there was a paperback novel tucked up on the dash of this old car.

I took lots more pictures, but I guess that’s enough for one post. I told Lyle he could do a guest post series for me, sharing all the fascinating tidbits he told me about various cars we looked at. I don’t know whether he will or not.

Towards the end of our tour we sat down to rest a few minutes and watched a video that was playing. It was a clip from the 1950s imagining what cars and highways might be like in 1976! We got such a kick out of that when we got home I had to see if I could find it online. I did, and so I’ll leave you with that…