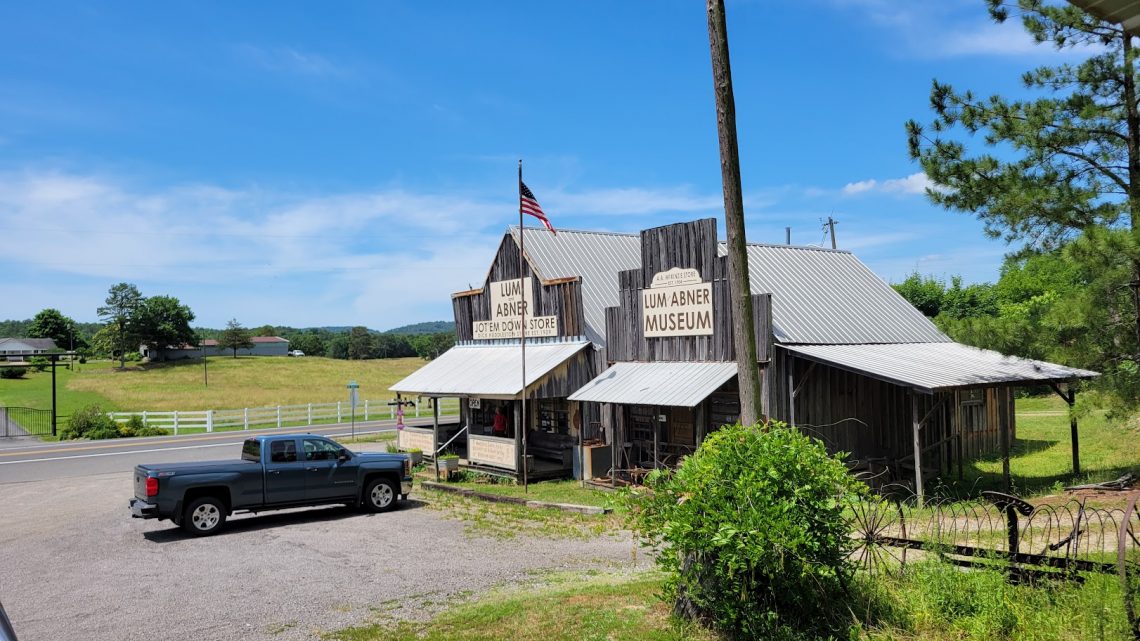 Our latest adventure was a weekend trip to Mena, Arkansas, for the Lum & Abner Art and Music Festival. If you don’t know who Lum and Abner were, you either didn’t listen to the radio in the 1940s, or you haven’t been around me very long. In any case, the festival was only secondary for me. What I really wanted to do was visit Pine Ridge, which is about 20 miles away from Mena. Lyle and I decided to take the trailer and make a weekend of it.

On Saturday we met up with our friend Janet (who is the only other female Lum & Abner fan I know). She showed us where the Lum and Abner monument is in the park.

We decided to head on out to Pine Ridge to tour “the old Jot ‘Em Down Store” since that was the highest priority on our list of things to do that day.

The setting of the radio show is an old-timey general store. Lauck and Goff (Lum and Abner) based it on a real-life store owned by a man named Dick Huddleston. The Huddleston store still stands in Pine Ridge and is a rustic museum and gift shop. The same family has owned it for at least 50 years. They bought it from Dick’s daughter back in the ’60s.

The doors were wide open so we walked right in…

…and didn’t get to hear the clattery cowbell on the front door.

Half of the building is the store and post office, with items for sale mixed with memorabilia.

The post office in the back corner was in operation until just recently.

The other half of the building was the museum. It’s actually two store buildings (both original to Pine Ridge) put together with an addition on the back. The display cases are also original.

Janet and I took lots of pictures, but as I look at them, I wish I had taken more. I see items in these pictures I wish I had gotten a closer look at (and a better picture).

There’s a lengthy newspaper article in the doorway that I did capture in segments. It was so interesting that I typed it up. You can read it here.

As we were chuckling over some of the brand names and touted benefits of the various “health” remedies lined up on the shelves, I wondered aloud if they might have some “Haddy-call” in stock. Dad frequently jokes about needing “Haddy-call” for any ailment that comes along. It was a popular remedy when he was growing up. (There’s even a song about it: The Hadacol Boogie.)

“Here it is!” Lyle spotted it first. Because, of course, I was looking for the wrong spelling. I notice it was manufactured in Louisiana (where Dad grew up), making me wonder if it was mainly distributed there. Also, the 12% alcohol was “just a preservative,” you understand. Wikipedia says it was especially popular in dry counties. Uh-huh. I wonder why.

I asked Mrs. Stucker (the store owner and our tour guide) what the books were on this high shelf. They are the records of all the people who still owe Dick Huddleston for their grocery bills from 80 or more years ago. (Of course, he’s dead now, and so are they.) That was something small-town stores offered back in the day, to “carry them on the books.”

And so we wrapped up our time in Pine Ridge. If you’re interested in seeing more pictures and trivia, please visit my Lum and Abner Fan Page. I’m in the process of re-building it from a site I had put together years ago, and now I’m adding to it with pictures and information from this trip.

We headed back to Mena in time to have lunch at the Skyline Cafe which has been there since 1922. We imagine that’s probably where Cedric and Dick had lunch, and Cedric wasn’t sure if it would be all right for him to order the Merchant’s Lunch since he wasn’t a merchant. (Listen to that episode here.)

After lunch, we returned to the festival in the park to take in the car show and vendor booths. The festival was disappointing as it didn’t seem to have much to do with Lum and Abner other than the name.

Then Janet suggested we visit the city cemetery to see the graves of some of the relatives of the actors who portrayed Lum and Abner. It is a huge cemetery, so I’m sure we didn’t find all the graves that would have interested us, but it was fascinating to see the ones we did find.

It was fun to spot other “familiar” places mentioned in the show, such as the Union Bank of Mena, though I don’t expect this is the building it was housed in during the radio era.

So that was our Lum and Abner weekend. The little town of Pine Ridge is currently for sale, which makes me wonder what it might be like the next time we have an opportunity to visit.