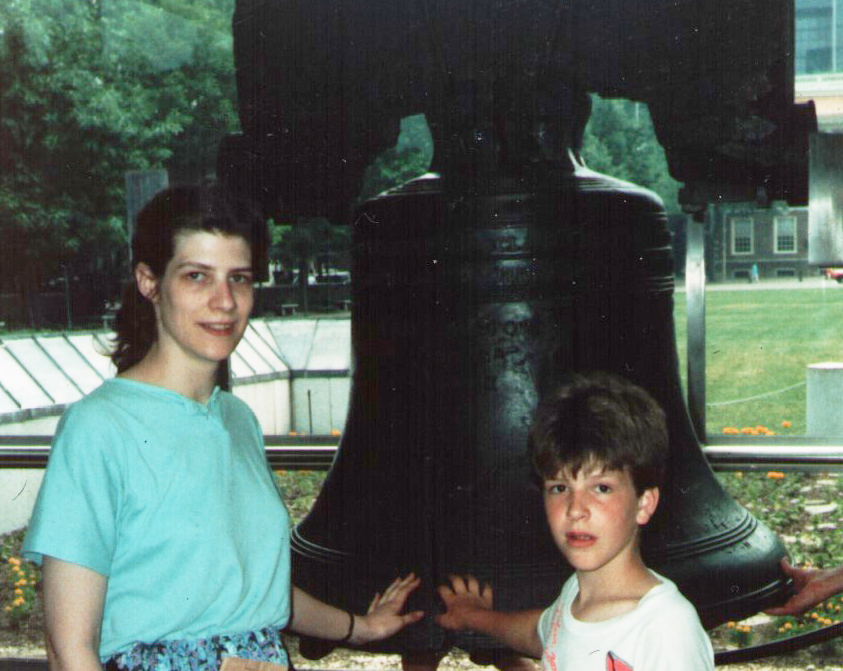 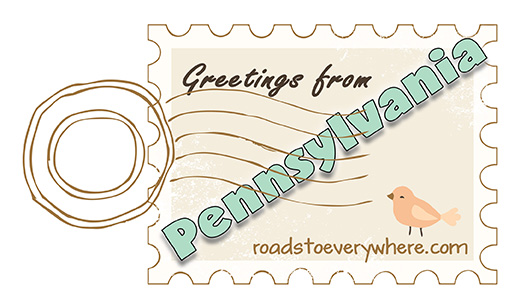 Day 11 of our virtual road trip takes us east from Ohio to Pennsylvania.

In 1991 Lyle and I made a trip to Pennsylvania from Kansas. We stayed with my aunt and uncle in Bethlehem, Pennsylvania and went on several sight-seeing excursions from there. Today I’ll be sharing portions of my journal and memorabilia from our visit to Philadelphia.

My cousins took off school so the whole family could go with us to Philadelphia. Our first stop was Independence Square in downtown Philadelphia. As we started the tour of Independence Hall we were in a group that included a class of 5th graders. The guide lectured on the birth of America, then asked if there were any questions. 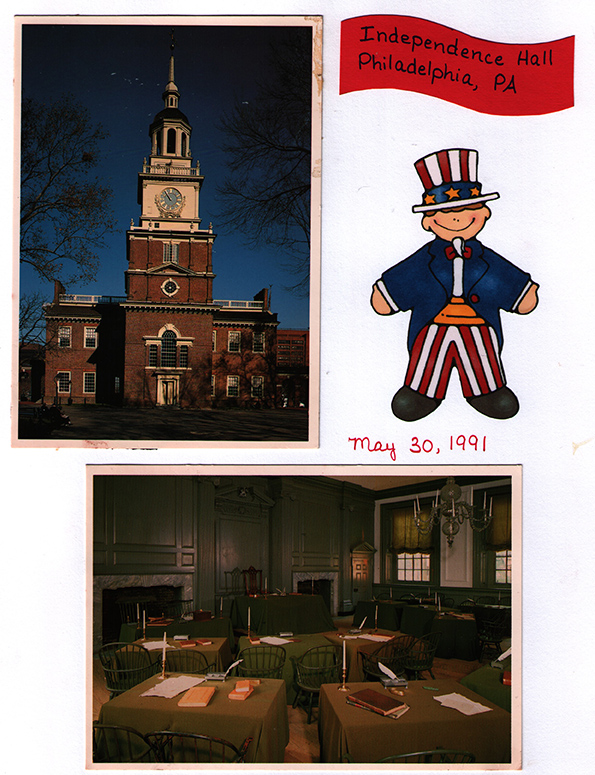 One little boy asked, “Is there anyone still alive from that period of history?” Of course everyone laughed.

Then a little girl asked, in all seriousness, “After all these years, are there any spider webs in there?” That was even funnier. The guide had told us that all the furnishings were original and that things were arranged just has they had been over 200 years ago. I guess the little girl thought that no one had ever dusted in there in the intervening years! 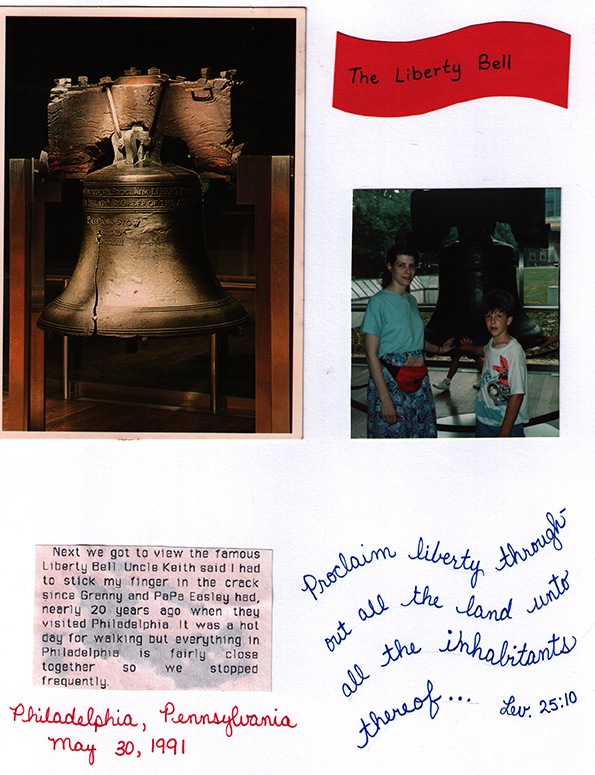 Next we got to view the famous Liberty Bell. Uncle Keith said I had to stick my finger in the crack since Granny and PaPa Easley had nearly 20 years ago when they visited Philadelphia.

It was a hot day for walking but everything in Philadelphia is fairly close together so we stopped frequently. 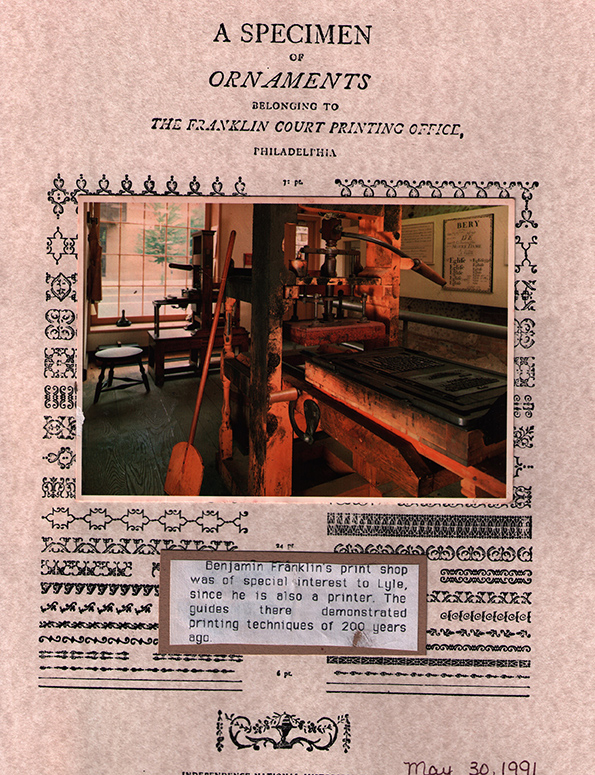 Benjamin Franklin’s print shop was of special interest to Lyle, since he is also a printer. The guides there demonstrated printing techniques of 200 years ago.

We visited Christ Church where George Washington and other famous men attended. We also stopped at the Friends Meeting House, a really old Quaker church. 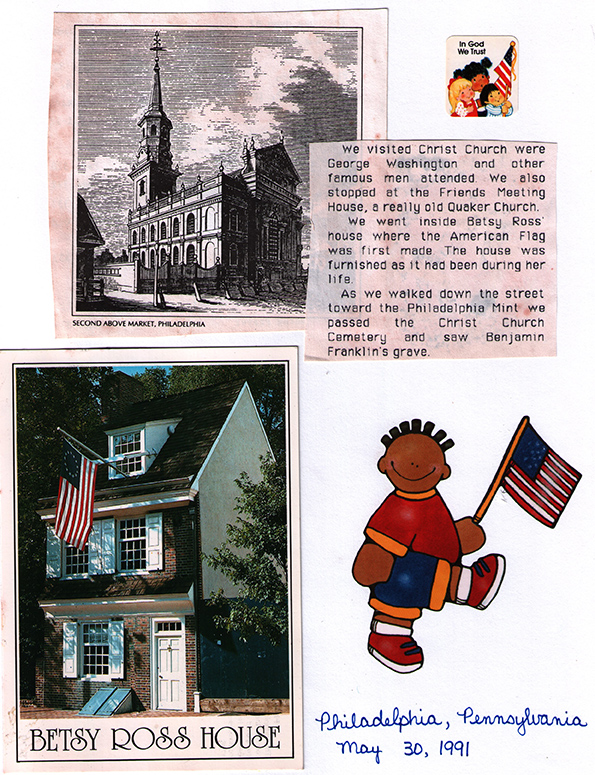 We went inside Betsy Ross’ house where the American flag was first made. The house was furnished as it had been during her life.

As we walked down the street toward the Philadelphia Mint we passed the Christ Church Cemetery and saw Benjamin Franklin’s grave. 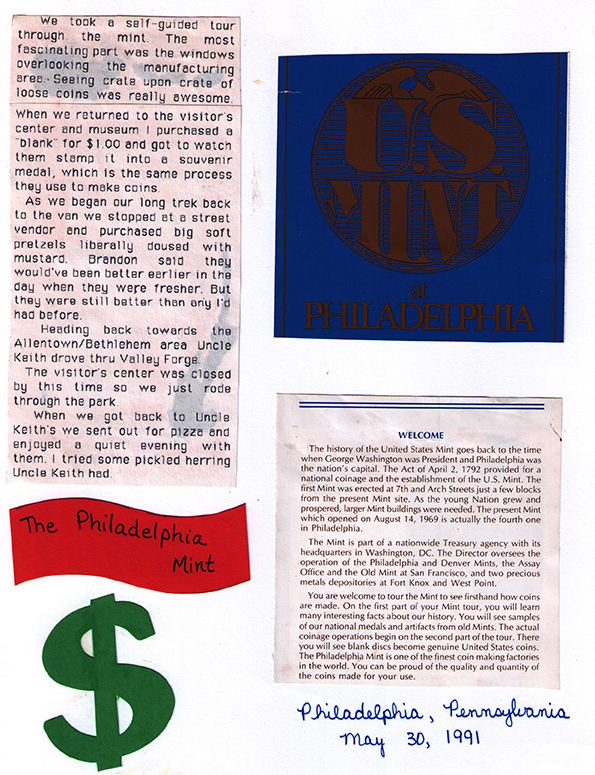 We took a self-guided tour through the mint. The most fascinating part was the windows overlooking the manufacturing area. Seeing crate upon crate of loose coins was really awesome.

When we returned to the visitor’s center and museum I purchased a “blank” for $1.00 and got to watch them stamp it into a souvenir medal, which is the same process they use to make coins.

As we began our long trek back to the van we stopped at a street vendor and purchased big soft pretzels liberally doused with mustard. Brandon said they would’ve been better earlier in the day when they were fresher. But they were still better than any I’d had before.

Heading back towards the Allentown/Bethlehem area Uncle Keith drove through Valley Forge. The visitor’s center was closed by this time so we just rode through the park.

When we got back to Uncle Keith’s we sent out for pizza and enjoyed a quiet evening with them. I tried some pickled herring Uncle Keith had.

Have you been to Pennsylvania? If so, please share a memory in the comments! That will make this series even more fun!