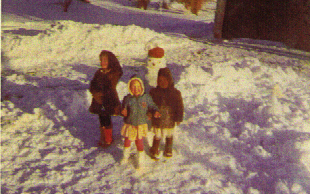 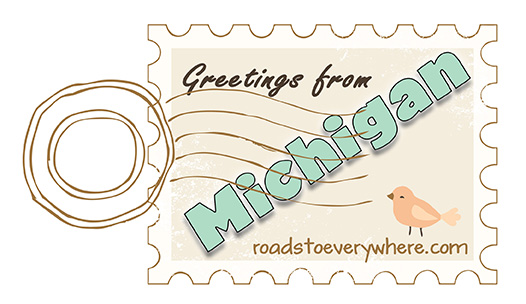 Day 13 of our virtual road trip takes us west from New York to Michigan.

We lived in Lansing, Michigan from 1969-1972. In the spring of 1970 the congregation Dad pastored bought a church building that had an apartment in the back of it. And so our family moved in. I can’t visualize the apartment part of the building, but I do remember the sanctuary. As preacher’s kids we were taught to honor the sanctuary–no running, no eating, no chewing gum even–but while we lived in that building it was the only place we had to run off energy during the long Michigan winters, so Mother let us play in the sanctuary. 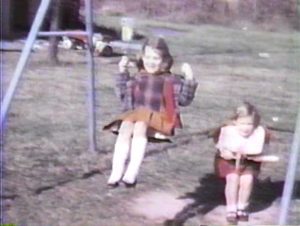 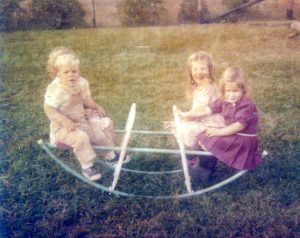 For outdoor play we had a swing set behind the church and a teeter-totter, the Jolly Rocker. By age five I knew how to pump my legs to make the swing go. The twins, at age three, found it easier to flop their bellies over the swing set and push themselves back and forth with their legs.

That winter, just before Christmas, we got a new baby brother. We needed another little brother. After all, I already had two little sisters, but just one little brother. 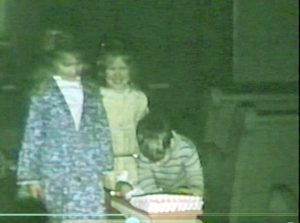 We girls got pink plastic baby buggies for Christmas which we pushed up and down the sanctuary aisles with our dolls. Then Mother said we could put our real baby in the buggy and push him around if we were very careful. She hovered at our backs as we took turns gently pushing the buggy around and around.

There was deep snow that Christmas. Probably there was deep snow every Christmas in Lansing, but I remember the tunnels Daddy dug through the snow to get out to the car and to the mailbox. We would bundle up good to go out to play for a few minutes before we would get too cold and have to come back in. 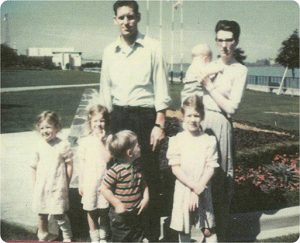 In 1971 some of our relatives came for a visit and we did a little sight-seeing with them. We went to Windsor, Ontario and Detroit. We visited Greenfield Village in Detroit. It was a fascinating place with demonstrations of historical skills. I was especially impressed with the candle-dipping display and stood watching for several minutes. When I turned around to look for the family members I was with they were nowhere in sight. Not a soul I knew. Here I was, five years old, lost in the crowd. I was concerned but I didn’t panic. I just started walking around looking for someone I knew. We had broken into several groups to tour the village. I was soon reunited with Mother and the rest. They had been looking for me, not realizing that I had not wandered off. They had just gone on without me. It seems like the adults were probably more worried than I was, which is typical for a child, I guess.

Have you been to Michigan? If so, please share a memory in the comments! That will make this series even more fun!